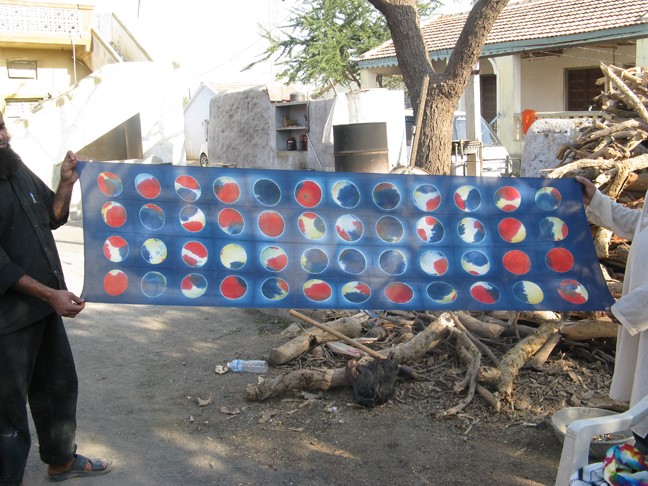 This time last year I was about to head off to India for a research and collecting trip for The Fabric of India exhibition. My first stop was to Bhuj in Gujarat and my travels are recorded here.

Some of the pieces I acquired during that visit are now on display and form an important part of the story of contemporary craftsmanship, design and the role of the artisan.

On that visit I acquired two wonderful textiles from Aziz and Suleman Khatri. The first was a dupatta (scarf) that showed their incredibly skill in tie-dyeing. In black, white and red, it is a minimal and modern design. Aziz explained that the pattern is called Kiri Makaudi (ants) because it was inspired by a group of ants that he watched moving in amoeba-like formation across the cement floor. As you look at the fabric, there is a sense of motion in those white spots, encased within the red frame.

I also acquired a sari from them, the making of which is a story of experimentation and collaboration.  The initial design was an experiment by Aziz in which he was trying to recreate the logo of the Pepsi brand consisting of a globe with blue, white and red stripes inside it. The technique involved painting a piece of  fabric with swirls of colour, then folding and compressing the fabric between two circular wooden discs which are clamped together and put into an indigo dye bath.

When opened the fabric that that is not accessed by the indigo dye shows the original painted base colours. The overall visual effect is a blue ground with a pattern of equal sized circles which have different colours in them.

Aziz showed his experiments to Mriga Kapadia and Amrit Kumar, two young designers who run the fashion label NorBlack NorWhite. They have often worked together enjoying a relationship of mutual respect and collaboration.

Mriga and Amrit played with the concept using the circular or globe motif but with different colours inside.

Aziz continued to experiment and created the Moon Sari. He uses the colour range of the Night scarf, but goes a step further in using different size wooden discs in the clamping process. One end of the sari starts with a smaller size disc which expands to a larger size at the other end. This gives the effect of a growing moon across the fabric.

With its striking contemporary design, beautiful indigo hues and its story of  collaborative creation, the Moon sari is one of my favourite objects in the exhibition.