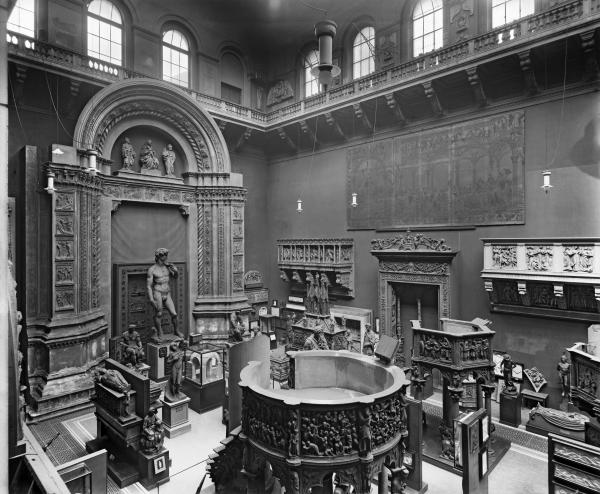 I joined the V&A just over a year ago and was thrilled to learn that I was going to be working on the Cast Courts project.  Their vast spaces and monumental reproductions of some of the worlds most well known pieces of sculpture and architecture have long been a source of fascination over the years on my many visits to the museum.

As a Project Co-ordinator, I am the main link between the museum’s project team (curatorial services, interpretation and conservation) and the Design Team (architects, engineers etc) ensuring at all times that the museum’s issues and concerns are considered and acted upon by the Design Team.

This is really an exciting project as the Cast Courts are one of the very few areas within the Museum that still retain their original nineteenth century function.  Over the years, particularly in the twentieth century the Courts underwent some fundamental changes  in an attempt to modernise and to an extent de-sensitise the setting of the Courts as was often the practice in the 1950’s, eradicating  many elements of original Victorian decoration.

A desire to understand how the Courts have changed and evolved over time was a key objective in developing the concepts for the re-presentation.  Archaeological investigations were commissioned into the forms of the Cast Courts and previous decorative schemes.  Important discoveries such as hidden arched openings that allowed the galleries to flow into one another and the rich pattern of decoration encouraged the team in their endeavours.

Through research that  was undertaken into relevant journals of the time, such as ‘The Building News’, and ‘The Architect’ , descriptions of the Courts reveal a riot of colour and ornate decoration with names of cities (ancient and modern of architectural importance) laid out in alphabetical order on the upper perimeter of the containing walls.  Rich colours were used; greens, reds, with shades of browns and creams.  According to contemporary reports, Further down the wall, just above dado level, mirroring the city names above were the names of famous architects from all periods with their country of origin including birth and death dates. The whole court was surrounded by two tiered balconies of terracotta.

Alongside this secondary research, paint sampling and analysis commissioned from consultants Crick Smith, revealed that the courts had been repainted approximately five times from 1873 to 1980.  Thus a picture emerges of the inevitable changes in taste not just in the backdrop of the Cast Sourts but to the collections that were on display.

We have now decanted the gallery of many of the movable objects, both large and small into a makeshift storage area in the corridor (currently hoarded off).

Two rather exciting things have emerged.  One was the discovery of a painted panel on the wall with an architect’s name, “Chambers”.  This is of course William Chambers the Scottish Architect (1726-1796 – it should be noted that all other sources give Chambers’s birth date as 1723).  His major London landmark designs include; Royal Academy of Arts, Somerset House and the Pagoda at Kew Gardens.

The other discovery was the revealing of the original floor made possible through the removal of the linoleum which had been heavily bonded down onto the elaborate surface.  The original floor is in superb condition.  However, it was disappointing to also find that, where there had once been trench heating running around the perimeter of the Court, it had at some point been infilled with concrete.  Further three mosaic glass panels designed by F.W. Moody (one of the museum’s designers) and manufactured by Whitefriars Glass company  mentioned in contemporary accounts had at some point been removed and replaced with encaustic tiles to match the remainder on the floor.

Aspects of these un-coverings can best be seen from The Gilbert Bayes Sculpture Gallery above (also known as Gallery 111).

We are currently trialling paint colours and finishes as it has been decided to recreate the colour scheme as it was in 1873.  However, the level of complexity of the original decoration has been toned down as part of a more holistic representation of the Courts as a functioning modern gallery.

More about this part of the project in the coming months.

P.S.: following a reader’s request, we investigated the discrepancy for Chambers’ birth date.  We think that at that time the Victorians were probably using the Architectural Publication Society’s Dictionary of Architecture, vol 2, 1853 – where the date is given as “probably 1726” .