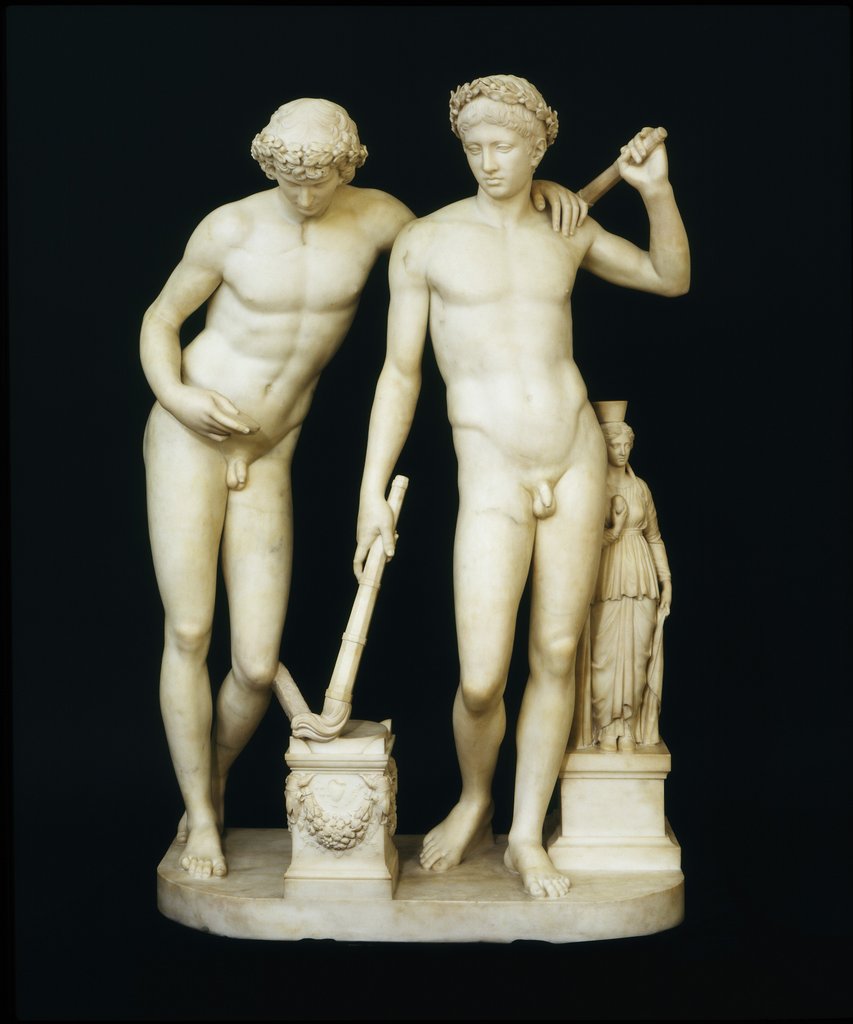 In part #1 of this blog post, we looked at the representation of homosexuality in visual culture of the eighteenth century. Though the stereotypical image of the overdressed, effeminate man permeated popular media such as prints, ceramics and the theatre, it remained a stereotype rooted in wealth, fashion and elite status. Here, we’ll look at what that actually meant for elite masculinity, by examining objects that represent the relationship between wealthy male collectors of art and antiquities, and the homoerotic implications of the things they collected.

This statue is a copy of a Roman original, by the English sculptor Joseph Nollekens. It is thought to represent Castor and Pollux, the twin sons of Leda, who was seduced by the god Zeus in the guise of a swan. They illustrate the physical ideal of male beauty prized by the collectors and sculptors of antique-style statues; and they also demonstrate the kind of sexual liaisons described by ancient historians, such as Ovid in his Metamorphoses, which would have been considered both deviant and titillating by 18th century standards. Increasingly, sculpture such as this was being seen at public exhibitions, rather than being shut away from general view in grand houses. As it became visible to an audience beyond the small coterie of artists and collectors, the display of nude male sculpture became problematic. If we work on the premise that 18th century art was created largely by male artists, for male collectors, the female nude can be explained as a focus of erotic desire; and its display, while titillating, fitted into the ‘normal’ framework of male gaze and control. Where, then, does this leave the male nude? The implicit homoeroticism of men gazing upon the naked male body was what underpinned many contemporary objections to antique statues in public view. For example, in August 1788 The Times reported that the public complained about the abundance of visible male genitalia at the Royal Academy’s exhibition of that year, prompting some of the statues to be covered or removed.

The men who produced, excavated or owned such works were doubly suspect due to their extensive foreign travels, particularly in Italy which was presumed to be a hotbed of sodomy and vice; and also because of their marked interest in aesthetics. The Grand Tour, as it was known, was the means by which elite young men (and some women) were directly exposed to both the art of antiquity, and the decadence of certain segments of continental society. Some Grand Tourists went to collect art, others went for sex and gambling – many went for both. The demand for ‘souvenirs’, and the looser moral environment, is demonstrated by this small bronze statuette. Cast by the Roman sculptor Zoffoli, catering specifically to the tourist market, it represents the youth Antinous, who was the favoured lover of the Emperor Hadrian. Hadrian commemorated his love for Antinous in verse, and after the latter’s untimely death the emperor founded the city of Antinopolis in his honour. By celebrating this history in art, rather than ignoring it, collectors played around with the definition of elite masculinity and the implications of the classical education which most gentlemen acquired as standard.

As with the Macaronis of a generation earlier, notable connoisseurs such as Sir Charles Towneley and Richard Payne Knight were in fact well known for their libertine lifestyles and numerous affairs with women. However, their obsession with the antique and its queer possibilities was noted by the public. Payne Knight, in particular, was for a time disgraced after publishing an explicit book on ancient phallus-worship, complete with engraved frontispiece of disembodied genitals in a variety of sizes and states of turgidity. The original genitals, which were in fact wax votives presented at a shrine to the god Priapus, were catalogued discreetly in the British Museum as ‘big toes’, and kept from public view.

There were certainly collectors of art whose sexual orientation was subject to scrutiny: Horace Walpole and William Beckford being the most notable. Walpole (1717-97), the son of the great Prime Minster Sir Robert Walpole, was an aesthete and gossip who spurred the revival of the English Gothic; while Beckford (1760-1844) was the son of a West Indian sugar planter whose eclectic collection spanned everything from antiquarian books to mineral samples. Both men travelled abroad extensively, and moved in that sexually tolerant milieu of the Grand Tour. Walpole’s sexuality was ambiguous – he never married and probably never took a mistress, but his feelings for male friends are at best implied in devoted letters – while the younger Beckford was certainly bisexual, having been forced into exile abroad when found having simultaneous affairs with his cousin Louisa Beckford and the teenage William Courtenay.Of course, it’s too simple to state that there was a direct connection between Walpole or Beckford’s sexual preferences and their desire to acquire art and antiques; but certainly exposure to this world offered a framework within which queer leanings could be more thoroughly explored and understood. From the Ganymede myth to Venetian gambling; the heady combination of antiquity and continental society offered a certain amount of sexual liberation in the ostensibly straight eighteenth century.