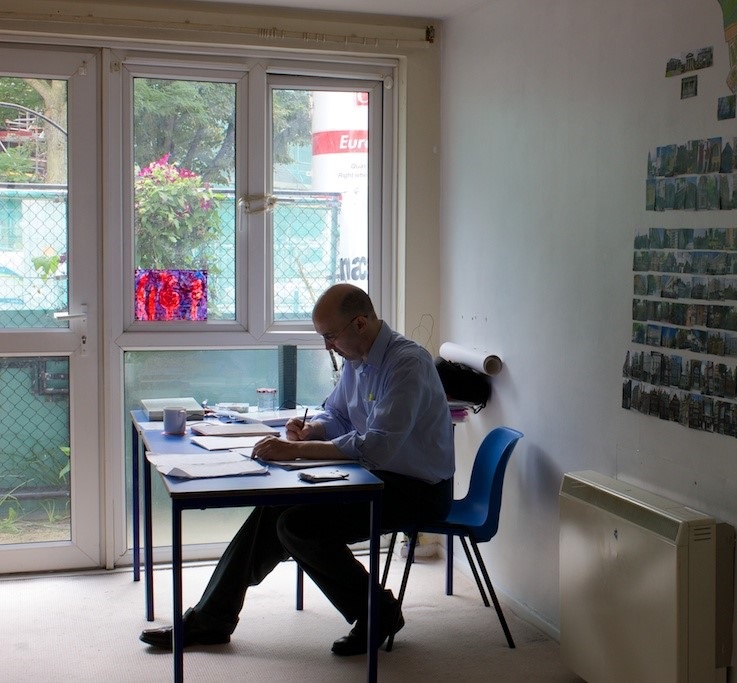 I’ve finally signed my tenancy contract with RBKC and have kicked the studio flat into shape. Several licks of paint and Constantine’s your uncle, the V&A Museum Community Artist. I am uniquely based at a former council flat that is part of a housing redevelopment. All the flats on this side of Shalfleet Drive will be demolished in about six months time. The tenants (apart from me) will all be rehoused in the new building. Needless to say, after a year of building works, they are really looking forward to this. I had a nice coffee chat with Linda and Ted Smith at No 13, hoping to feature them in a film project.

The studio is a perfect space for me to work. I’m responding to the theme of housing and regeneration. The patio overlooks the building site although it feels as if the building site and the towering cranes are overlooking me. I’ve been out in the dusty and noisy garden making sketches of the trees surrounded by forklift trucks, pallets and busy workers. These trees will form the heart of the enclosed garden. They are the only surviving element of this section of the estate that included a nursery and garages. In the breeze, these trees might whisper to future tenants. Tell them the story of this area and its complex social history (pigs, pots, slum, race riots, squats).

My first session in the studio was with several friends who helped me produce a drawing about our personal experiences connected with housing.

Steve Gross: “I’m thinking back to the house I grew up in with my mum and dad and sisters. The stairs were a very important thing. They’ll all be watching the television and I’ll be sent to bed at 9 o’clock. But I wouldn’t go to bed. I’ll sit at the top of the stairs and hear them laughing and laughing and laughing at Monty Python’s Flying Circus. I couldn’t see what was going on. I felt really excluded. It was very unfair. This incident is an amalgamation of several where I smashed the window and then they are coming to look for me and I’m hiding under the stairs (laughs) waiting for them to tell me off. I was about eight. There was always something up and down the stairs, or under the stairs.”

Caroline Stingmore: “There’s a conflict. Because this picture is from my childhood. Really happy childhood memories growing up in Ireland. My dad had a rockery and he always put orange marigolds on it and we all hated them. But now we loved them, but at the time we hated them, they were so orange. My mum always provided wonderful heartwarming meals. That’s a big memory. And the cherry blossom tree in the garden. I used to dance around it like a little fairy. It’s all idyllic. And in this picture is where I felt very guilty when my boys were born. We were living in a council estate and I couldn’t give them what I had. We were trapped in a flat in a high rise block. They were okay actually, but I felt immense guilt and sadness.”

Down at the V&A Museum I’ve been researching an architect and artist whohelped shape the historic built environment of North (and South) Kensington. Future blogs and art will focus on John Francis Bentley and Nathaniel Hubert John Westlake. Bentley built an artists house for Westlake, just a stones throw from my studio. They collaborated on several churches, most noticeably St Francis of Assisi on Pottery Lane.

It was great to meet some of the staff at the V&A. Matthew Storey, curator in the Word and Image Department, has shown me architectural models and a fascinating sketch book by William Burges. Marisa who works on the Community Programme has suggested potential audiences for my work. Next week, I’m visiting Elizabeth Grant, Education Curator at RIBA and look forward to connecting with their resources.

Over the coming weeks, I will be working up my detailed plans for community engagement. These include negotiating with the BFI about screening a seminal film (Leo The Last), running summer workshops for local residents, devising a combined cycling and drawing tour of the Royal Borough’s most important and quirky buildings, and collaborating with local residents in the making of a film about the housing redevelopment.

Constantine Gras is the Community Artist in Residence from July – December 2014. Visit Constantine’s website here and follow the V&A blog for updates during his residency.