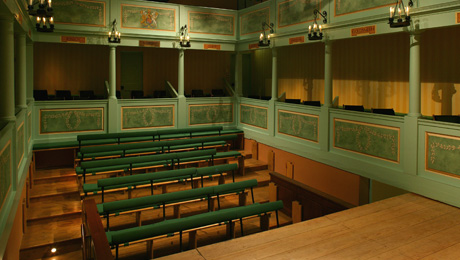 As part of the Assistant Curator Development Programme, Harriet Reed visited the Georgian Theatre Royal in Richmond to find out more about its history, restoration and archive project.

The Georgian Theatre Royal in Richmond was built in 1788 by Samuel Butler, who managed a touring theatre company around the circuit of Beverley, Harrogate, Kendal, Northallerton, Ripon, Ulverston and Whitby. At the time, the theatre was considered an old-fashioned provincial playhouse, but its survival over subsequent centuries has turned it into one of Britain’s greatest theatrical treasures.

Due to falling audiences who now travelled to larger theatres by train and road, the Georgian theatre saw its doors close in 1830. After stints as an auction house and wine warehouse, a public campaign saw it re-opened in 1963 after a careful restoration led by Richard Southern and Richard Leacroft.

The small stage has hosted several star names over the years, including Sybil Thorndike, Joyce Grenfell and Alan Bennett, and continues to operate a busy programme of performances including a renowned annual Christmas pantomime.

The Georgian Theatre Royal currently has a capacity of 200 visitors, but in 1788 would have seated around 400 patrons – all of whom would be no more than 11 metres from the stage. The ratio of stage to seating in the theatre is exactly 50:50 – making it a uniquely intimate space.

It is most remarkable for its completeness, including the original boxes, staircase, and stage effects: 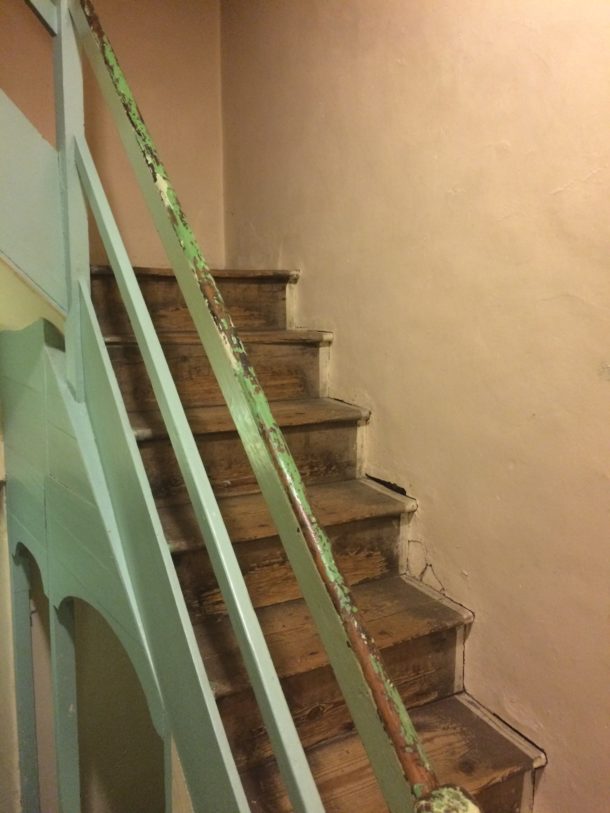 The original staircase. The dark green paint left visible on the handrail dates from 1816, and was used to determine the 1960 palate. A lighter shade was chosen for aesthetic reasons.

The theatre contains its own small museum, including the oldest surviving stage scenery in Great Britain titled ‘The Woodland Scenery’, dating 1818-1836.

The Georgian Theatre Royal also maintains its own archive, comprised of around 8,000 items. These include playbills, prints and other ephemera, and capsule archives from its major supporters such as Sylvia Crathorne and Paul Iles.

The Heritage Lottery Fund has granted the theatre monetary support for an archive and exhibition project, which will fund research into the archive, re-house fragile material, plan future public access and produce an exhibition on the history of the theatre’s restoration.

The V&A supports this research through our own collections, which contain programmes, posters and plans of the theatre.

The Georgian Theatre Royal is open Monday to Saturday from mid-February to mid-November, with hourly tours every day.

To find out more about the theatre, visit their website here: http://www.georgiantheatreroyal.co.uk/

You can experience a 360 degree tour of the theatre here: http://www.georgiantheatreroyal.co.uk/HeritageTours/360Tour.aspx

To search for material concerning The Georgian Theatre Royal held in the V&A collections visit Search the Collections.