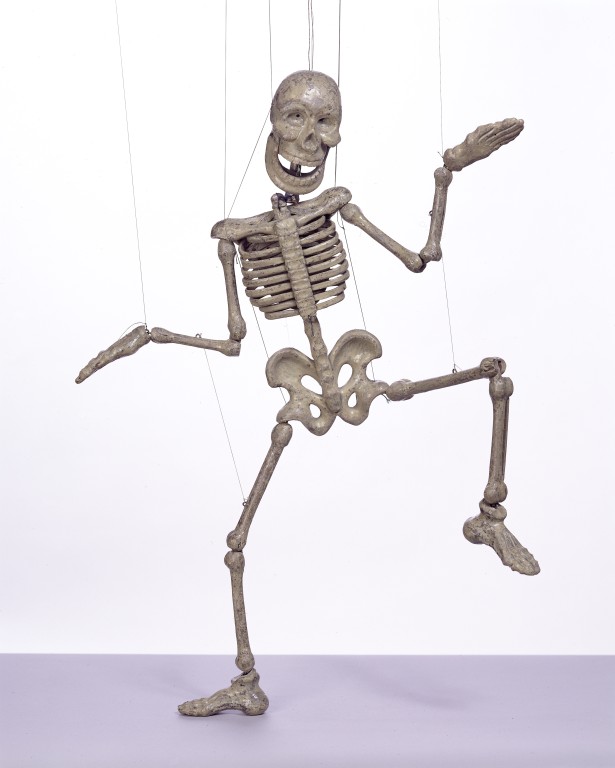 In celebration of Halloween Assistant Curator, Alexander Clayton, takes a look at five spooky objects from the V&A Theatre and Performance Collections.

Measuring at almost 7 feet tall, this costume and mannequin for Frankenstein’s monster is one of the largest—and strangest—costumes housed in the V&A collections. The costume was originally worn by Boris Karloff in the 1935 film, The Bride of Frankenstein, part of a series of three Frankenstein films starring the actor. The success of the films is often credited to Karloff’s portrayal of the creature and the sympathy that he evoked as the ugly but sensitive monster.

The production would make over $2 million at the box office, and the New York Times would describe the film as ‘a grotesque, gruesome tale which, of its kind, is swell’. The film has since been credited as one of the great gothic horror films, named in Time’s All-Time Top 100 and Empire’s 500 Greatest Movies of All Time.

The history of Frankenstein goes back much further, originating from Mary Shelley’s novel, Frankenstein; or the Modern Prometheus (1818). Early stage portrayals showed the monster in a toga, with flowing black hair and pale blue skin; a stark contrast to the angular-headed tattily dressed character made famous by Karloff.

The illusion involves the use of glass, light, and hidden rooms. An image is reflected from the hidden room onto the stage, providing a ghostly translucent effect and making objects appear to float in space. The effect caused a sensation in Victorian London, with audiences genuinely believing they had witnessed a supernatural event.
This technique has remained largely unchanged for the past 150 years, being used in haunted houses and carnival sideshows. The effect was even used to create a hologram of ghostly Kate Moss at the V&A’s exhibition Alexander McQueen: Savage Beauty.

Most recently, the illusion was used to make Tupac Shakur appear at Coachella Festival 2012, as well as create Michael Jackson’s appearance at the 2014 Billboard Music Awards.

As one of Shakespeare’s most iconic scenes, Act 4, Scene 1 describes Macbeth’s encounter with the three witches. The dark scene includes the sorceresses summoning horrible apparitions of Macbeth’s fears, and creating gruesome potions with ‘eye of the newt and toe of the frog, wool of bat and tongue of dog’.

The spells and potions of the production have struck fear into audiences and cast members alike. When Sybil Thorndike performed as Lady Macbeth in the 1926 production, she recounted the Lord’s prayer before every performance, fearful of bringing the spells and spirits to life.

This head-twister illusion was used in Tommy Cooper’s haphazard comedy and magic routines. The trick comprises of an outer box and a rotating inner box, Cooper would rotate his head to give the illusion that it could turn a full 360 degrees.

Other tricks in the Theatre and Performance Collections include a magician’s rabbit, a crystal ball, and a telephone directory torn in half by strong woman Joan Rhodes.

The V&A Theatre and Performance Collections are home to 660 puppets and marionettes. Ranging from Punch and Judy, to Sooty and Sweep, and even a pilot that turns into an aeroplane.

To find more examples of objects in the Theatre and Performance Collections visit Search the Collections.