All events are free, no booking required

Join the LGBTQ Working Group and friends for an afternoon of talks and tours exploring LGBTQ artists, designers, and numerous ‘queer connections’ that can be found in the V&A collections and galleries. Including: an imaginary dinner party that might have been planned by Constance Spry; reflections on Gertrude Stein’s couture suit; lesbian spectatorship and sculpture; snapshots of gay London and the sci-fi work of designer Eddie Squires …

More a tale than a talk: books, prints and photographs from the Word & Image Department illustrate an imaginary dinner party that might have been planned by Constance Spry.  Deborah Sutherland introduces us to Spry’s wide circle of friends and connections including: Gluck, Cecil Beaton, Marie Laurencin, Eileen Gray, John Minton, Janet Flanner, and other cultural icons who influenced 20th century lifestyles and interiors.

Deborah Sutherland is Curator of Operations in the National Art Library.  When she was managing a book move, she came across “Hostess”, and her passion for 20th century book, ephemera and graphic design lead her from there into the fascinating world of Constance Spry. That passion has also resulted in a display currently showing in Gallery 102 at the V&A: “Printing a modern world: commercial graphics in the 1930s”.

Please note the Prints & Drawing Seminar Room has limited capacity, visitors will be admitted on a first-come basis

The V&A collections include a brown velvet suit made for Gertrude Stein by couturier Pierre Balmain. Join Dawn Hoskin as she reflects on the suit’s biography, from production to the present day, considering: Stein’s visual ‘lesbian identity’; Balmain’s identity as a designer; the relationship between client, friend and couturier; and numerous ‘queer connections’.

Dawn Hoskin is Assistant Curator of Metalwork, Ceramics & Glass. Since joining the V&A in 2008, she has worked across a number of Collections and was previously Assistant Curator on the major redevelopment of the Europe 1600-1815 Galleries. She is Co-Chair of the V&A’s LGBTQ Working Group. Her current research explores the depiction of women cyclists in 19th-century posters.

Exploring the Daily Telegraph’s claim that “museums and art galleries are temples of lust, positively throbbing with passion,” join Dr. Amy Mechowski on a journey through the Sculpture galleries as we find that passion for women and between women ignited in the history of the female nude.

Amy Mechowski is Head of the Learning Academy at the V&A. Formerly Co-Chair of the V&A’s LGBTQ Working Party (2009-2013), she holds a PhD in the History of Art from UCL on the subject of the construction of lesbian identity in 19th century photography. She continues to publish and deliver public lectures on the subject of women and sexuality in 19th-century visual and material culture.

A Queer Eye on Sci-Fi

Science fiction dominates the work of designer Eddie Squires (1940-1995) whose eye-popping fabrics took 1960s London by storm. This talk by Zorian Clayton will look at the incredible bequest of 9 scrapbooks he left to the V&A, containing a snapshot of gay London over 30 years alongside kitsch graphics and packaging, futuristic furniture and fashion, visionary architecture and moonscapes!

Zorian Clayton is an Assistant Curator in the Prints department and Co-Chair of the V&A’s LGBTQ Working Group. Keen on ferreting out objects of queer interest in the museum archives, he has previously given talks on The Queer Allure of Art Deco, Denton Welch, Derek Jarman, and the gay 1890s. 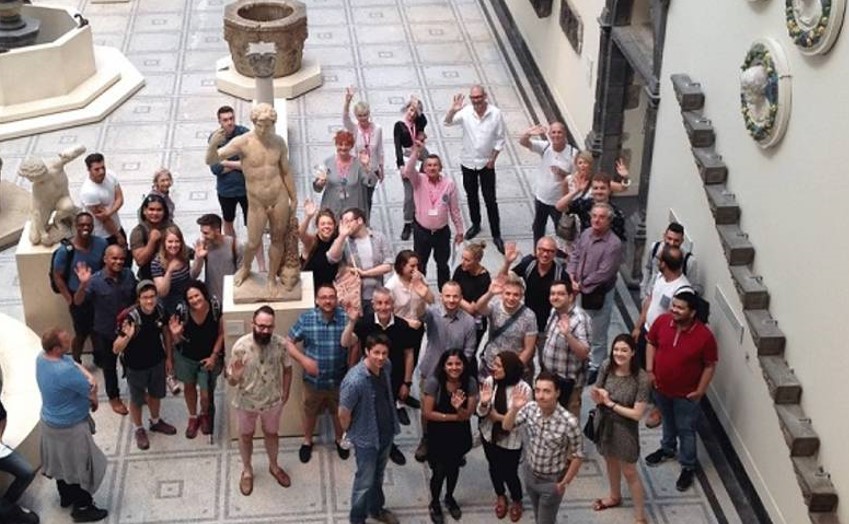 Conclude your day by joining our monthly volunteer-led gallery tour, which explores gender and sexual identities through a selection of LGBTQ-related objects in the V&A’s rich collections.