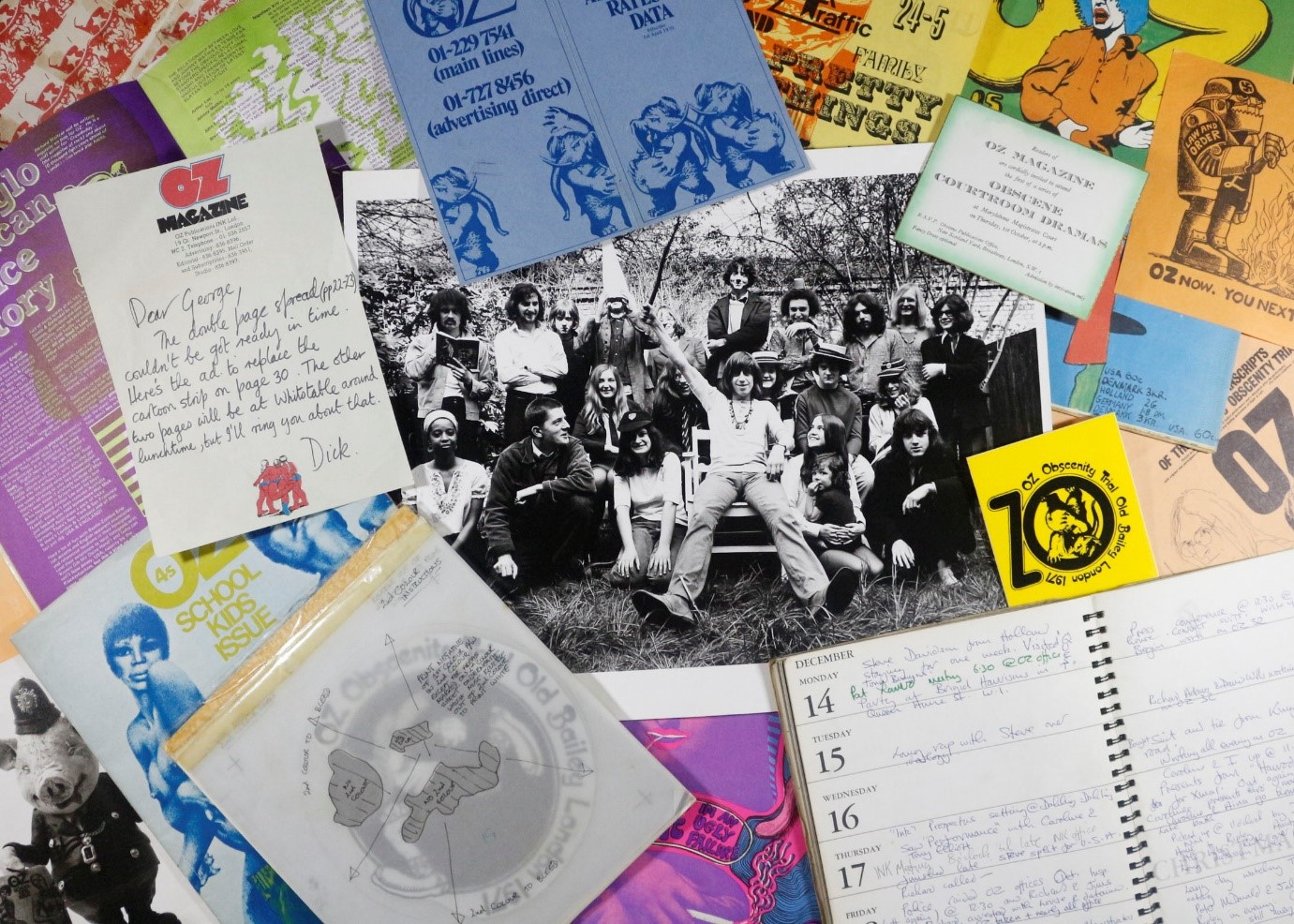 Archive Assistant, Alice Ridgway, gives an introduction to the Felix Dennis OZ Archive and the challenges in cataloguing the collection.

Earlier this year the V&A Department of Theatre and Peformance acquired the Felix Dennis OZ archive. Felix Dennis was the co-editor of the underground magazine published between 1967 and 1973.

The magazine was renowned for its psychedelic covers by artist Martin Sharp and angering the British Establishment with its left-field editorials discussing drugs, contentious political stories, sex and alternatives lifestyles.

OZ became infamous in the UK through the obscenity trial in 1971 surrounding the ‘Schoolkids’ issue which was edited by 20 teenagers and featured a sexually explicit montage of Rupert Bear, resulting in the three editors being charged with ‘conspiracy to corrupt public morals.’ The six week trial is arguably the most important censorship trial of the decade.

The Felix Dennis OZ archive is vast and occupies over 50 boxes with a variety of material. This spans a full run of the magazine; page mock-ups detailing printing instructions; articles and artwork; fan mail and hate mail; subscriptions; business papers; documents relating to the obscenity trial; paintings; photographs; posters and Felix’s personal library.

Work has now begun on the long process of preserving and cataloguing the archive.  Many items are large and fragile and are being rehoused in specialist conservation folders and boxes. Over the coming months the archive will be sorted and listed in a logical order to help readers conduct research. The archive can be split into material of a number of predominant veins relating to the production of the magazine, the OZ trial and Obscenity Fund, Felix’s later pursuit of COZmic Comics and Hippie Hippie Shake, the unreleased 2010 film.

Perhaps most notable is a lithograph donated by David Hockney to the OZ Obscenity Fund which will become part of the museum object collection. Another favourite is a typescript of ‘God Save Us’ by John Lennon and Yoko Ono, the charity collaboration with the Elastic OZ Band which is complimented by an original signed vinyl record by Felix, Jim Anderson and Richard Neville.

My favourite items from the archive are the more ephemeral ones that preserve the fleeting memories of counterculture. For example, a card address list written by Richard Neville for OZ in which an underground network of collaborators such as Andrew Cockburn and Stan Demidjuk are fondly referenced as ‘Young handsome freelancer; should go far.’ and ‘What more can one say? An elegant man of the people. No fixed abode.’

The correspondence of global countercultural connections also offers a fascinating insight into the underground network: the far-out slang they adopted; the psychedelic designs of letterheads and compliment slips and the contrast of this with the surprising level of business acumen and organisation that is evident in these underground groups.

Once the rehousing and cataloguing is completed, the Felix Dennis OZ archive will offer an exciting array of unseen material to the public and help to preserve the memory of counterculture for the future.

Highlights from the Felix Dennis OZ Archive can be viewed online through Search the Archives.