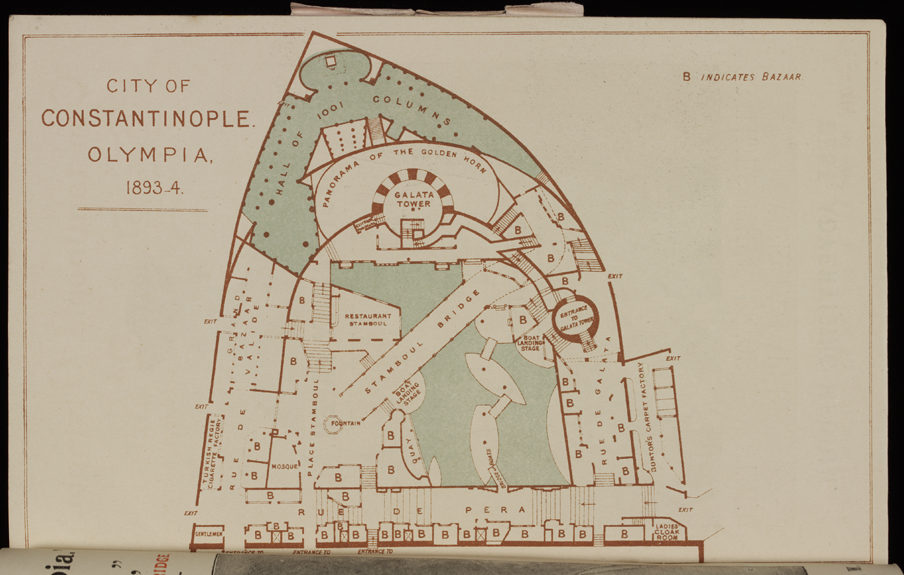 In this second post of the series marking the forthcoming 250th anniversary of modern circus, Curator, Cathy Haill, explores the history of aquatic pageants at Olympia Exhibition Hall, London.

The biggest and most profitable single aquatic spectacle that London had ever seen opened at the Olympia Exhibition Hall on the 26th December 1891. Joseph Lyons, the caterer who had the concession for selling food and drink at Olympia, and Harold Hartley, chairman of the Pure Water Company, dreamed the watery dream of representing Venice in London,  with canals and facsimiles of buildings including the Rialto Bridge and the Café Rialto, streets of houses and shops, Venetian glass-blowing displays at Salvatini’s Glass Manufactory,  thirty imported gondolas (specially made in Italy eight foot shorter than standard to suit the Olympia canals), ‘native gondoliers’, gondola serenades and barcarolle concerts, Venetian pleasure gardens illuminated from dusk during the summer season, the vast theatrical spectacle Venice: The Bride of the Sea featuring a Grand Aquatic Carnival Ballet with a thousand dancers, and a Majestic Aquatic Pageant presented four times a day. Imre Kiralfy came over from America to mastermind the enterprise which was built in just four months.

Venice in London ran for thirteen months and cost the enormous sum of £60,000 or about four million pounds in today’s money, which was recovered in the first three months. Refreshments were provided by J. Lyons & Co. Limited, whose headquarters were in an Olympia basement room. Three years later in August 1894 he moved into Cadby Hall, his newly built food factory in Blythe Road, opposite Olympia, where the archives of the Victoria & Albert Museum are stored today, in a building built over Olympia’s pleasure gardens.

The Times described Venice in London as ‘by far the most important spectacle of its kind ever witnessed in London’; The Graphic called it ‘Wonderfully Gorgeous, Simply Bewildering’; Lloyd’s decided it was ‘A marvel of marvels’ while the magazine Truth described the visitors’ experience:

‘A black gondola awaits you, propelled by a stalwart Venetian in a striped Guernsey of black and orange. Away you go on your voyage of discovery. Voices seem hushed, so extraordinary is the illusion.. On goes the gondola in a dream: We stop at Salvatini’s and believe we are at Murano. They are making glass exactly as they do in the original establishment.. After dinner you can stroll in the streets again, or smoke a cigar in the Rialto Gardens, but be sure and secure a seat for the theatrical entertainment, which is one of the strangest and most fascinating things of the kind I have beheld.’

When Olympia Exhibition Halls were sold to a new company in 1893, the hugely expensive Venetian canals and buildings were kept for a second season by the company that included Lyons and Hartley as board members. Imre Kiralfy’s contract having expired, his brother Bolossy Kiralfy was hired and transformed Venice into the Oriental exhibition Constantinope, or the Revels of the East. On Boxing Day 1893 the ‘Grand Terpsichorean, Romantic and Lyric Spectacle and Aquatic Pageant in Two Acts and Six Tableaux’ opened, with golden-domed buildings and bazaars replacing Venice, and visitors rowed in caiques by Arab boatmen through mirrored halls.

Over 32,000 people attended the opening day, and although not as spectacularly popular as Venice in London, the show ran for two years until November 1894, when hardly a month after Constantinople closed, another vastly expensive Bolossy Kiralfy aquatic spectacle The Orient, with costumes alone costing £20,000, opened on Boxing Day. Despite record-breaking opening day attendance of 34,000 people, bad weather and a flu epidemic limited attendance, and the show was forced to close in July 1895. 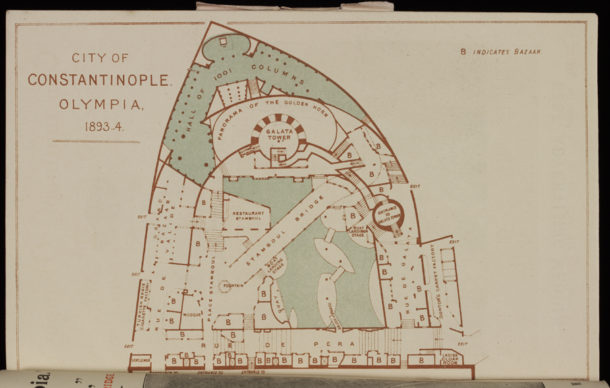