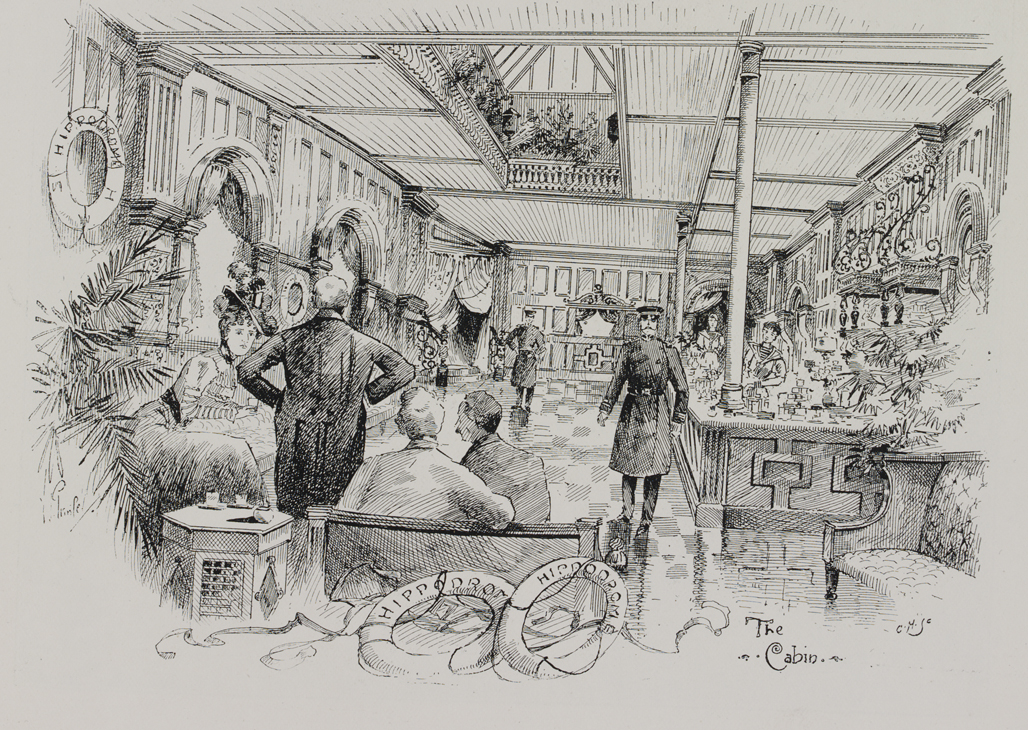 In the third post of the series marking the forthcoming 250th anniversary of the founding of modern circus, curator Cathy Haill, focuses on the aquatic entertainments at the London Hippodrome.

Spectacle sold seats in late 19th century entertainment, and London’s most magnificent building to mount aquatic circus was the London Hippodrome near Leicester Square, on a site bounded by Cranbourn Street, Charing Cross Road and Newport Street. Built by Edward Moss to combine hippodrome, circus and theatre, it was designed by the talented theatre architect Frank Matcham. Members of the press invited to tour the building in September 1899 were ‘astonished and delighted’ according to an article in The Daily News, 29 September 1899 that also reported that its planned Christmas opening was unavoidably delayed: ‘owing to the mechanical stage and arena requiring protracted rehearsals’.

The theatre’s aquatic theme extended to the Grand Cabin Saloon, a ship’s bar with walls covered in oak panelling and hung with lifebelts, a ceiling replicating an opening into a ship’s deck, portholes depicting sea beyond, and attendants dressed in naval uniforms.

The auditorium featured a stage and an arena or ring containing a tank 230 feet in circumference operated by hydraulic rams. It sank to a depth of 8 foot in about a minute and was filled with 100,000 gallons of water weighing 400 tons for spectacles such as ‘The Grand Spectacular Aquatic Carnival’ Giddy Ostend, or, the Absent-Minded Millionaire, its opening aquatic production in which the young Charlie Chaplin took part. The tank featured fourteen port lights, eight telescopic central fountains and a circle or fountains around the ring fence. For dangerous animal performances the ring fence was raised by hydraulic rams, and entrances to the ring could be flooded for the arrival of boats. The stage behind the arena, constructed on steel girders, could be raised or lowered to the level of the arena. When the ring wasn’t flooded for the annual spectacle it could be used for demonstrations of swimming and diving. The London Hippodrome was heralded as another wonder of London, and its opening on 15th January 1900 was celebrated with a sumptuous silk programme. 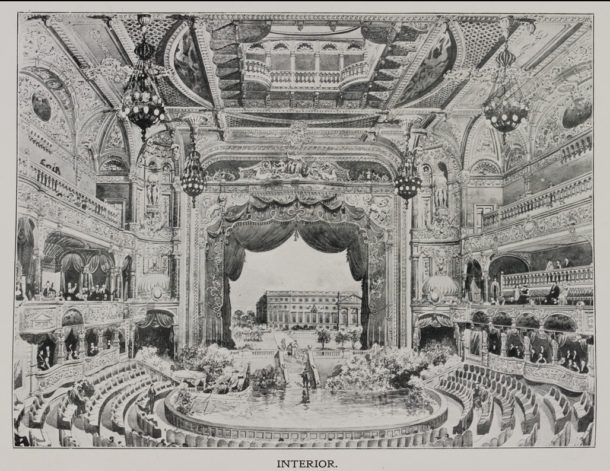 The auditorium and arena of The London Hippodrome. Illustration from a souvenir programme for The London Hippodrome, 1902.In December 1900 the production of Cinderella after eleven circus acts was followed by Fairy Fountains and the water pantomime The Village Wedding, originally produced by Albert Hengler at his theatre in Argyll Street. Over the next ten years a variety of increasingly sensational aquatic spectacles drew audiences to the Hippodrome, with the help of Albert Hengler. His own aquatic spectacles had ceased in London by 1895 when he had leased Hengler’s to the National Skating Association who turned it into a skating rink with ‘real ice’.

Hengler hadn’t given up on aquatic circus, and although he sold his Hull circus in 1896 and his Liverpool Grand Cirque in 1901, he still had circuses in Birmingham and Glasgow, and in 1901 built a new circus building in Chepstow Street, Manchester, presenting A Village Wedding in 1902, and a new spectacular Siberia in 1903 featuring soldiers and horses plunging into water ten foot deep. The expense of yet another ambitious enterprise got the better of him however. His Manchester circus closed by May 1904 and in August he appeared before the Manchester Bankruptcy Court, admitting that his circus expenditure between January 1902 and May 1904 of £34,269 exceeded his £33,313 takings.

March 1901 at The London Hippodrome saw the ‘hunting sensation’ Tally-Ho! with Albert Hengler’s hunters and plunging horses, and in May 1901 The North Pole attempted realistic snow and ice in the arena with seventeen of Carl Hagenbeck’s polar bears playing in the water. The Redkins, 1903, saw Hengler’s plunging and diving horses fording the river, with Indians in canoes descending the rapids into the ring, using 80,000 gallons of water, according to an article in The Tatler in July 1903. Busch’s Plunging Elephants were the stars of the Zoological and Aquatic Spectacle the Golden Princess and the Elephant Hunters in January 1904, with elephants that were walked up to a platform behind the scenes to slide down the iron chute to the watery ring.  Siberia, Albert Hengler’s production originally mounted in Manchester was staged at the Hippodrome in 1904, and even in Paris in September 1905 at the Nouveau Cirque – the true fount of the circus water sensation that Hengler claimed to have dreamed.

The thirst for aquatic theatre at the London Hippodrome had seemed unquenchable, but by 1909 works were undertaken by Matcham to enlarge the auditorium and reconstruct the interior as a Music Hall and Variety theatre, and in 1958 the original interior was demolished and reopened as The Talk of the Town.