We’d heard that the V&A had vast archives from Glastonbury Festival, but that these weren’t recordings of performances – no, these were field recordings and film footage that captured the spirit and atmosphere of this cultural event through documenting the way that everyday life unfolded in it’s own strange way at the Festival.

As a musician myself, making music under the name Dane Law, I’ve always been interested in music and memory, and the role that the rituals of festivals, fayres and raves can play in building communities. The project had instant appeal to me, and I was keen to get my students working with these archives and thinking about how they could ‘remix’ them.

Working closely with filmmaker and lecturer Stefania Marangoni and our learning and teaching assistant Eleanor Foulkes, we ran a series of online workshops where we explored the history of Glastonbury, watched and listened to the V&A’s recordings, and talked about how the techniques we used to process and sequence sound and image could be used to articulate themes of memory, community and the ‘intangible heritage’ of Glastonbury.

The pieces that you see and hear emerged from these workshops, and show the diverse ways in which the students explored the meaning of Glastonbury as a national cultural event and in their own lives.

Many thanks to Carolyn, Kate and Emily at the V&A for letting us remix the archives and Jack Driscoll for mastering duties.

“Being able to step inside the archives and create a film for the V&A’s Glastonbury @ 50 installation has been an amazing experience. Going through the footage and sound was nostalgic and made me look forward to the time where we can safely attend large events again. Humans’ desire to belong and music festivals are one of the vehicles that allow us to form communities and bonds outside of our everyday lives- which is remarkable.”
Eleanor Foulkes, Student

“Glastonbury, the epitome of the festival experience. A cooking pot of culture, collaboration and creativity. A formidable feast for the senses! I endeavoured to capture these essences with my production pieces ‘Fields of Friends’ and ‘Glasto has Landed’.

The footage portrayed a potent and insightful perspective into the Glastonbury experience, captured and framed through varying cinematographic styles that presented a tantalising kaleidoscopic assortment of viewpoints, each more evocative than the last. Through each shot and scene I was witness to a chirpy, high spirited and invigorating display of colour and vibrance illustrating how and why Glastonbury easily appeals to all music lovers, fun-time fanatics, social enthusiasts, veteran-traditionalists, beatnik modernists, vacating families and wondering hobos alike. It was with this in mind that my sound design, video editing, and poetic intentions were augmented to represent sentiments of unity, human relation, and our capacity for and understated necessity of vast scale congregation.

Praise ye Glastonbury for you show us how to be thy self whilst maintaining sweet harmony with those alongside; a balance longed for by many but rarely perfected.”
James Game, Student

“Thanks to these voices, I began to understand the ethos, the enthusiasm, the excitement of the Glastonbury Festival.  Amongst the mass of people saying not-very-interesting things there were nuggets – and lots of them!  Who these people were, why they go to Glastonbury, what they get out of it, and why they’ll be back next year.  Audio magic was happening before my ears. The biggest challenge was keeping it down to the specified five minutes.”
Andy Popperwell, Student

Trying to tell a story without any dialogue, just music and ambient noise. This was the challenging and exciting task I had to undertake as a storyteller while editing “Glastonbury Live Forever”.

I chose to write different chapters corresponding to different moods as the story unfolds. The end of the film gives the impression of a never-ending story, which is precisely what was evoked by the pun in the title of the film “Glastonbury Live Forever”.
Caroline Chu, Student 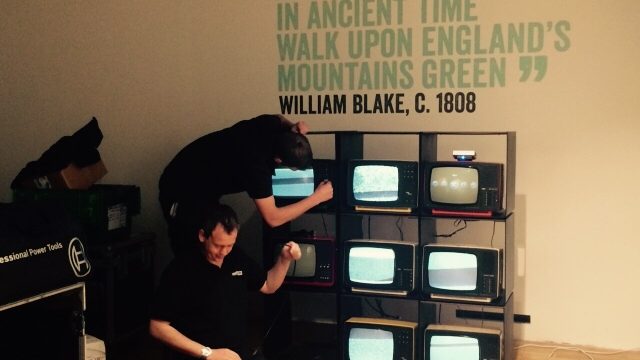