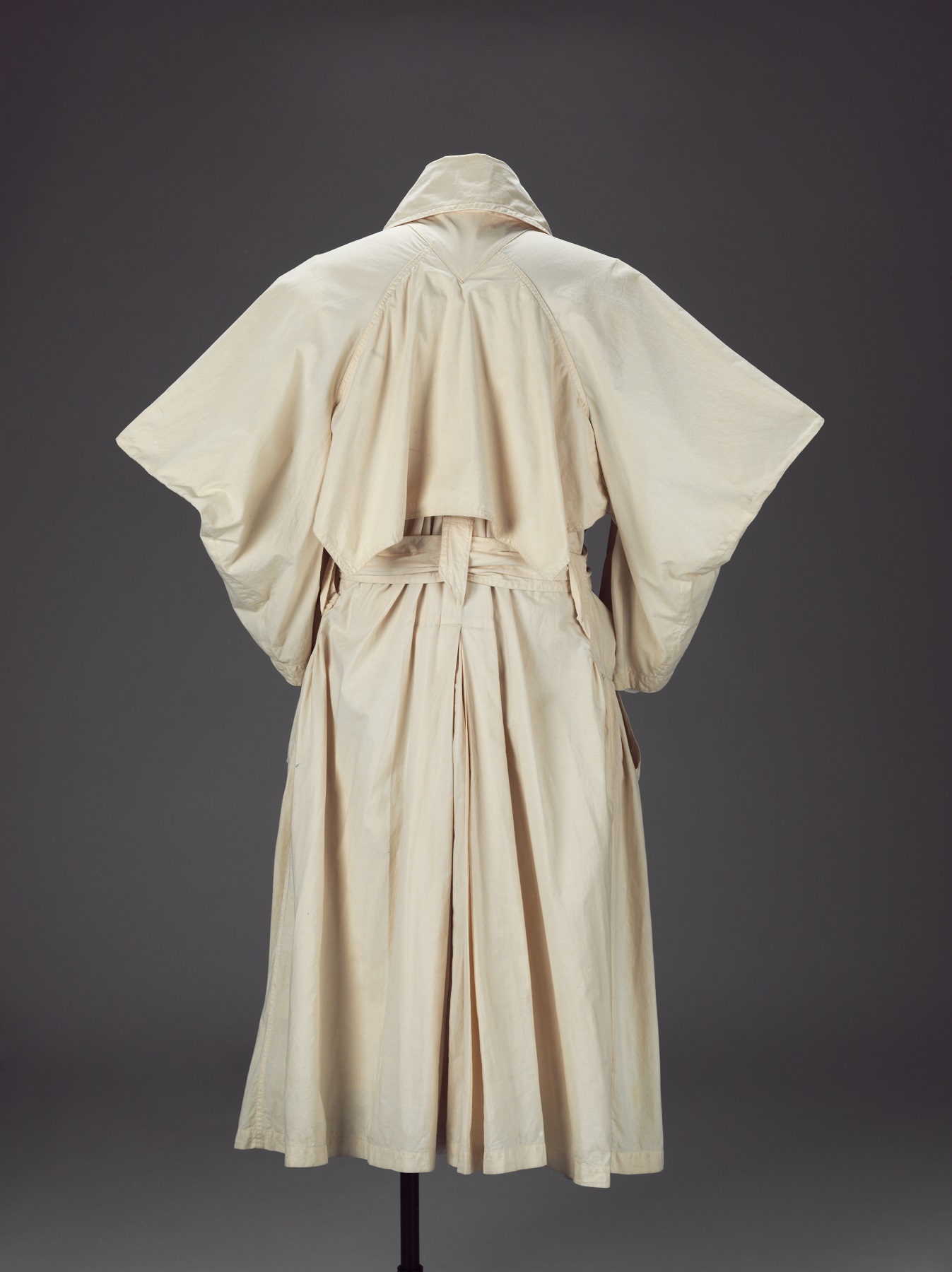 ‘Rustic’ linen smock-shirts were worn by farmhands well into the 19th century. These garments were woven in such a way that they would shrink and tighten when damp, giving them a degree of water resistance: this is also the principle on which gabardine works. Gabardine was invented by Thomas Burberry, who patented it in 1879. With this fabric, the cotton yarn is also waterproofed with rubber before weaving. Gabardine is used, most famously, for trench coats.

Trench coats were intended primarily as practical wear, but are nowadays meat and drink to the fashion world. They became really fashionable after the First World War, having been introduced into towns and cities by demobilised soldiers returning from the trenches. They are an icon of 20th century fashion, often associated with characters from film noir, though have also obtained a somewhat seamy reputation, worn often in film and fiction by disreputable types, such as journalists and private detectives. Recently, on a courier trip, I was asked by the truck driver why I was wearing a ‘flasher mac’, so I know first-hand that the association of trench coats with seediness has not abated.

The direct descendant of the trench is the greatcoat, a highly practical item of outerwear originally used by coachmen. Greatcoats have generous proportions and a similar arrangements of water-shedding flaps, cape etc., to the trench coat. Sometimes greatcoats would be coated with a layer of grease or oil to improve waterproofing (presumably at the cost of smelling nice). This type of coat was appropriated by some gentlemen, presumably drawn to the idealised notion of a swashbuckling, heroic night-rider.

Famous outerwear brand Aquascutum (Latin for ‘water-shield’) supplied military coats to the British army during the Crimean War (1853-1856), a conflict in which many of the garment’s key details were developed, including the raglan sleeve, supposedly named after the First Baron Raglan or, (confusingly) Lord Raglan. Raglan sleeves reach right to the neck with long diagonal seams, covering the shoulder. Baron Raglan, who led the British army in the Crimea, lost an arm at the Battle of Waterloo (1815), and so devised a sleeve which would be easier for him to get into. Or, if you prefer this story, the second of the two aristocratic Raglans (the Lord), who was also present in the Crimea, invented a showerproof soldiers’ garment made from a potato sack. Other identifying features include big storm pockets, checked linings, a big collar and wrist straps. Other features reference the garment’s military heritage: epaulets for gloves or insignia, and metal D-rings on the belt, which were originally designed for hanging a sword.

Aquascutum and Burberry both supplied coats to British Army officers in the First World War. These coats were hard-wearing, warm and waterproof, and it was for these reasons they were carried over into civilian life. Another reason for their successful transition from the battlefield to the high street was their dashing and romantic, ‘officer-class’ look, as well as for their inevitable association with male bravery and the supposed ‘glory’ of warfare. Many former officers reportedly wore their same army coats for decades after the armistice, swearing on their durability and consistent water-resistance.

Trench coats fell out of favour with militaries in the Second World War, the preference being for shorter combat jackets which allowed soldiers greater mobility. However, sinister organisations such as the Gestapo utilised long coats for an intimidating effect. The disappearance of military customers meant brands had to focus on the appealing noir potential of trench coat. They became somewhat unfashionable during the later 1960s and 1970s, being ‘rediscovered’ in the 1980s as silhouettes widened, and the moody and romantic signature of the garment was once again recognised. All through this time, the basic design of the trench coat did not significantly change, although the treatment sometimes has (a good example being a lace coat recently acquired by the V&A). In fashion terms, an owner of a trench coat is probably looking to capture some of the sense of romance provided through its cinematic portrayal.

Representing the trench coat in the rainwear display, currently on show in the V&A fashion gallery, is this outsized ‘mac’ from Vivienne Westwood and Malcolm McLaren’s final collaboration: the 1983 Witches collection. It is included to show the development of the form of the trench coat for a high fashion market. It is simply constructed from rectangles of waterproofed cotton, showcasing Westwood’s great skill at cutting patterns. It also reveals her interest in historical menswear, which was first explored in her 1980 Pirates collection. Perhaps appropriately it was purchased by its former owner from McLaren and Westwood’s outlet shop, Nostalgia of Mud: a fitting commentary on the fashion history of the trench coat?