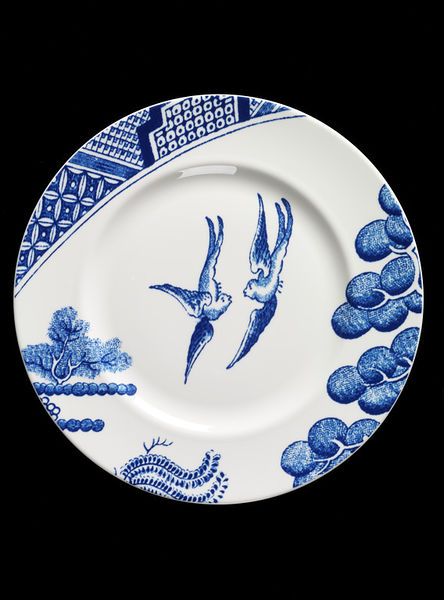 The Willow pattern is one of the most famous British ceramic designs. The scene of a temple with bridge, boat and willow tree was inspired by images found on Chinese ceramics, but was the creation of British manufacturers in the late-18th century. The love story it supposedly depicts was invented later as a clever marketing tool. An early dated example of the Willow pattern design is in the V&A collection, a plate inscribed ‘Thomasine Willey / 1818’ . The Willey family of Cornwall, for whom this plate was made, supplied the Staffordshire potteries with the blue pigment, cobalt, in the early-19th century.

The Willow pattern has an enduring quality that continues to prove popular with contemporary ceramic manufacture and art production. A series of plates made by Wedgwood in 2005 will feature in the display, here architectural ceramicist Robert Dawson takes elements from the iconic pattern – pagodas, Chinese figures crossing a bridge, two lovebirds – and uses digital technology to distort and make us look afresh at the familiar imagery.

Preparations for the display this week included a visit to contemporary artist Livia Marin at her studio to see her Willow derived ‘Nomad Patterns’ series, it was a great opportunity to examine the pieces and discuss which ones to include. Livia makes these from found and broken ceramics, immersed in resin and plaster forms, transfer-printed with a dispersed composition of the Willow design. The once formal pattern intended to cover a teacup or plate, has become a floating element, altering the placing and scale of the decorative pattern to present a series of unique objects part broken and yet complete.

The Willow pattern continues….watch this space!

Can’t wait to see the Livia Marin pieces alongside the older willow pieces, they look such fun – it’s so good to know that the old can inspire the new.

I don’t know much about the Willow patterns, however I do have one which looks similar to some I just seen online, however there are no markings on back just lots of blue mottled spots coming through. On the front the birds look much closer, and the white pathway from the house is narrower, the men on the bridge are more rounded. There are bloches of blue coming through and I can see what could be thumb prints on the edges. All I know is that it came from my fathers side of the family who lived in York, Western Australia.

Blue and white has become one of the most popular colour combinations in history. This classic colour palette originated in Asian ceramics in the 9th century. These ceramics...