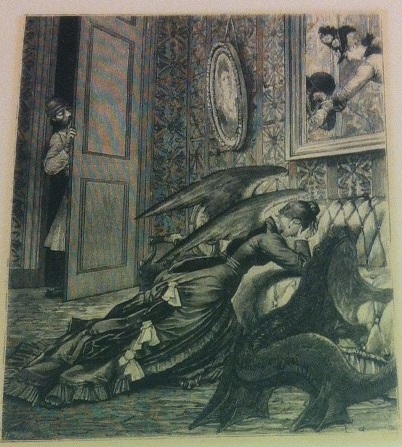 Last week I fell victim to a Surrealist joke, some 80 years after its creation!

A sure-fire way to discover new things in the Word & Image department is to have a gander at what other people have requested to see from the stores.  On any given day you will see a wide variety of prints, photographs, drawings, paintings, posters, designs and volumes from across the centuries, spread out on the tables and trolleys, having been called up by members of the public, university and school groups, curators, conservators, loans officers, and technicians etc.

One print caught my eye on a trolley just out of sheer strangeness.

Seeming to be from the 19th century – a high-end ‘penny dreadful’ perhaps? – there was something not quite right it.  The gothic wings sprouting from the woman’s back, the mythical sea beast clambering up the settee, the mysterious painting depicting the figures in the scene… I had to know more!  First port of call was the register for 1967 when the series was acquired.

Confusingly, there were two Ernsts next to one another in the run of numbers.  The first was Ernst Barlach, who I thought for a split second was the author of these works.  Barlach was a German Expressionist artist whose anti-war sculpture in the 1920s and 30s made him a target for the Nazis during the crackdown against what was perceived to be ‘degenerate art’.  A set of woodcuts he created in 1922 to illustrate an edition of Goethe’s ‘Faust’ were similar in gothic tone, but not in style.

Looking again at the register, I realised it was the hand of the second Ernst, Max Ernst.  Created during a three week holiday in Italy in 1933 whilst staying with friends, the work is entitled ‘Une semaine de bonté (“A Week of Kindness”).  The images were sourced from 19th century natural history texts, encyclopaedias, popular French novels and other books, cut out so meticulously it is difficult to believe these works are collages at all.  At the same time, the bizarre characters of the series are so preposterous that the scenes cannot be believed!

182 plates in the final published work, they are presented recto-verso and mounted in our collection, and the National Art Library has a set in original book form.  The images were collaged, then photographically reproduced as heliogravure prints (also known as photogravure) whereby a plate, usually copper, is treated with a light-sensitive gelatin exposed to a film positive and then etched.  The end result is a highly detailed intaglio print.

Calling up magic, mysticism and alchemic exploration with eye-popping and sometimes horrific results, the series thrashes around in a world of grotesque violence with a healthy dose of errant sexuality, illuminating and yet confusing the viewer at every turn.

Human heads are replaced by lion or bird heads, the stiff dresses of the women are often augmented to have bird or bat wings sprouting from the back, while snakes and spines and skulls spill out from the corners of the plates.

In typical Surrealist fashion, there is no easy explanation or neat finish for the viewer.  There is no text to explain the images, but they are linked together into seven chapters, each with a central character, divided into five different volumes, each under a heading as follows: mud, water, fire, blood, darkness, sight, and finally, the unknown.  Each volume is bound in a different coloured cloth and the final one is gold, alluding to the alchemic once more.  Truly a wonder to behold, even more so to think that this odd, pioneering precursor to the graphic novel was created in just three weeks while the artist was on holiday.