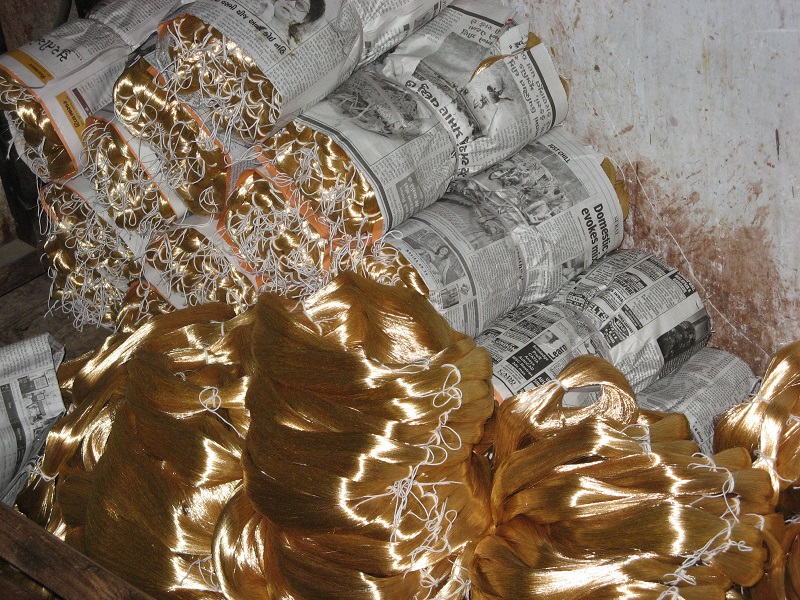 The’ bling-ometer’ in Textile Conservation reached new heights last week with the arrival of the contemporary loans from India so it seemed a fitting time to return to the ‘All that glitters’ blog post (part 1 and part 2 can be found here) and complete the story with a look at manufacturing techniques past and present.

The basic principles of metal thread production have not fundamentally changed but the processes have become more mechanised over the years and the variety of materials used have also expanded. Historically metal (usually silver or copper alloys) would have been cast into a rod form and then drawn through progressively smaller dies or draw plates to reduce the diameter. Once it was sufficiently thin it could be gilded and then refined in size even further. The round wire could then be flattened to produce metal strips that could be used as they were or wound around a fibre core to make a flexible thread. This drawing from the V&A archive shows silver-gilt wire drawing, it was drawn by John Lockwood Kipling in 1870 in Amritsar, India.

I have been fortunate to visit metal thread factories in both India and the UK thanks to study trips organised by the Textile Group of the Institute of Conservation (Icon). I thought I would share some of the images I took of contemporary metal thread production. The next series of photographs were taken in the city of Surat in the state of Gujarat during a visit to the Kishorchandra Jariwala Silverware and Brocade factory in November 2006. At the factory we saw copper wire being drawn out between diamonds until it was incredibly fine, then it was electroplated by passing it through baths of silver cyanide to produce silver threads. The resulting silver thread was flattened into a fine strip, wound onto a bobbin, and then wrapped around a cotton core.

In the next series very fine copper wire is passed through a bath of lacquer to give it a golden colour. Then it is baked in an oven to set it, washed and wound onto metal bars. The lacquered copper is wrapped around a cotton core using the same method as the silver strip. Very fine threads for weaving are made by lacquering polyester strips and winding them around a polyester core. A wide range of colours can be made using this method.

In autumn 2013 I was among a group of textile conservators who visited Toye & Co. The company holds a Royal Warrant from Her Majesty the Queen as supplier of Gold and Silver Laces, Insignia and Embroidery. We visited their Bedworth factory, near Coventry, which specialises in the weaving of ribbons and braids, embroidery, millinery, mounting of medals and making metal threads. It was fascinating to see the high speed machines in action spinning very fine metal wire into purl or bullion, which would then be cut into pieces and turned into sumptuous glittering embroideries!

A useful synopsis of the status quo.