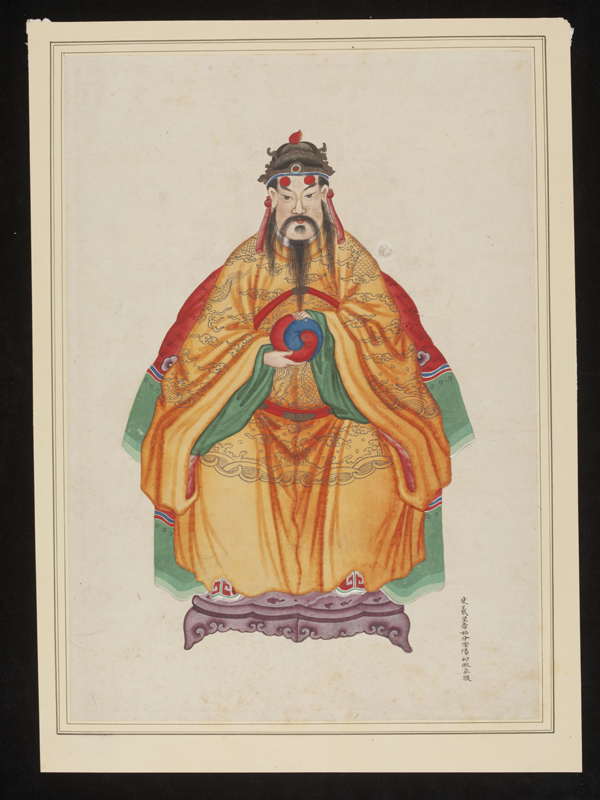 The V&A’s Conservation Science department has been working on a collection of Chinese export paintings, looking closely at the materials that the artists used and trying to uncover the secrets of an important part of the history of Britain in China. Sonia Bellesia, former intern in the Conservation Science section explains more…

Originally sold as souvenirs to Western merchants and travellers in the 19th and early 20th centuries, the V&A’s Chinese export paintings are a little known part of the museum’s East Asian collection. We discussed the conservation of Chinese export wallpaper in a previous post, but these paintings are perhaps more like the Company Paintings from India we discussed in this post. They are mostly painted in watercolour on either silk or paper, and usually represent scenes of everyday life, or botanical and zoological subjects. Very little is known about the artists, provenance and history of these paintings, and so far there has been no rigorous scientific investigation of their manufacturing processes.

This is where I come in. As part of my Science for Conservation MA at the University of Bologna, I spent 6 months at the V&A as an intern in the Conservation Science section under the supervision of Dr Lucia Burgio. My work fitted within a wider project about Chinese Export Paintings in partnership with the Royal Horticultural Society and Nottingham Trent University. One of the aims of the project was to understand the painting materials and techniques used on Chinese export paintings. For example, were Chinese artists using the same types of materials whether they were producing work for local markets or making souvenirs to be exported for Westerners? Analysis of the materials used by the painters of these works can give us a huge amount of interesting information: What kind of pigments were used by these artists? Did they use local or imported materials? Can the pigments used help us to date the paintings? and can we gain a better understanding about the artists’ materials trade between China and Europe in the 18th and the 19th centuries?

My first step was the microscopic examination of the pigments on the paintings, to identify whether any underdrawing was present, and to identify whether Chinese or European paper was used as a support. This is also where we begin to hypothesize which pigments were present.

After that, the watercolours are analysed by X-ray fluorescence spectroscopy (XRF), a technique that allows us to identify which chemical elements are present in a pigment. Sometimes, simply identifying a particular element suggests the presence of a certain pigment. For example, the presence of copper in an area of blue paint in a painting indicated to us that the pigment azurite was used for some of the blues. Or finding mercury in a red painted area suggested that another traditional pigment, vermilion, was used.

To investigate further, we used Raman microscopy – a method that’s often used for watercolour paintings, and in particular for identifying pigments that can’t be identified by XRF alone. Most importantly, both these techniques can be used in situ, meaning that we don’t need to remove a sample from the painting.

What did we find?

In the blue areas, we found both azurite and Prussian blue. Azurite is a naturally occurring pigment containing copper that was used traditionally in both China and in Europe. A similar copper based pigment, malachite, was found in green areas  Prussian blue however, which we also found, was one of the first modern synthetic pigments and was only available from the early 18th century onwards, so paintings containing this pigment cannot have been created before that time. Other traditional pigments were found during my investigation: the arsenic-based pigments realgar and pararealgar were found to be used for some yellow and orange areas (the presence of poisonous arsenic is useful to know when one is handling such paintings), and we confirmed that vermilion, commonly used in both China and the West, was also used extensively.

An interesting find was a pigment made from the mineral botallackite, a rare copper-based mineral often found as a patina on Egyptian archaeological bronzes, but used in these paintings as a blue pigment.

Of course, limited time and funding mean that we can’t possible analyse all the paintings in the collection, but I was able to get a very good overview of the materials used by the numerous, unnamed artists that made paintings on paper and silk for the European market. Overall, it seems, these artists were using the same types of materials whether they were producing something for the domestic market, or for export purposes.