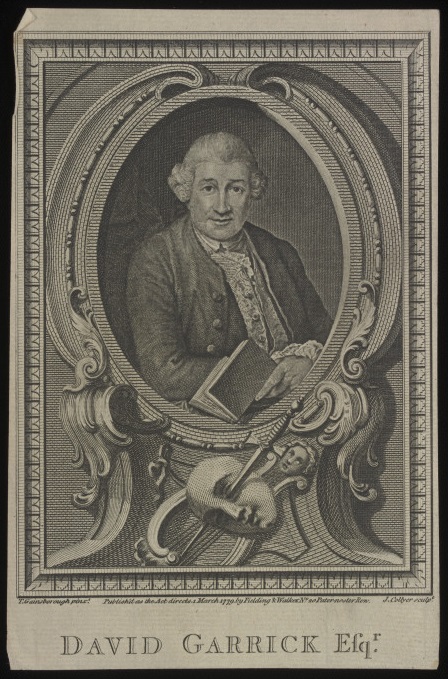 When challenged by an irate David Garrick (1717-1779), the celebrated actor, dramatist and theatre manager, who had discovered that titan of eighteenth-century letters, Dr Johnson (1709-1784), throwing elegantly bound books around his (Garrick’s) private study, Johnson is reputed to have offered this churlish excuse: ‘I was determined to examine your collection and find it consists of three sorts – stuff, trash, and nonsense’. Another version of this anecdote attempts both to justify Johnson’s behaviour and protect Garrick’s literary taste by suggesting that Johnson was in fact referring to Garrick’s collection of ‘novels and lighter works which had been presented as elegant tributes’.

In 1823 Garrick’s great accumulation of books at Adelphi Terrace and Hampton, along with those of his wife, Eva Maria Veigel (1724-1822), were consigned to auction by Robert Saunders, who conducted the sale with ‘zeal and determination’ at ‘his Great Room’ at 39 Fleet Street. The sale was on an epic scale, lasting ten days and comprising 2678 lots (over 3000 volumes)!

This, however, did not constitute the Garricks’ entire library. In 1779 David Garrick had bequeathed his Collection of old English Plays to the British Museum; Mrs Garrick’s close friend Hannah More (1745-1833) witnessed the removal of the books on a hand cart from Hampton one Saturday in 1780, remarking that ‘they were not things to be read’ and ‘only valuable to antiquarians for their age and scarcity’. There is also plentiful evidence that Garrick presented friends with books from his library as gifts: in 1772 he gave the actress Kitty Clive (1711-1785) his copy of Tobias Smollet’s translation of the works of Voltaire (now in the Morgan Library & Museum, New York) while in 1776 Hannah More was the lucky beneficiary of his copy of Petrarch’s sonnets (now in the Fitzwilliam Museum, Cambridge). (One of Garrick’s copies of Petrarch fell victim to Dr Johnson’s unconventional book handling technique: ‘in one of those fits of enthusiasm which always seem to require that he should spread his arms aloft in the air, he suddenly pounces my poor Petrarcha over his head and upon the floor!’)

In old age Mrs Garrick, according to the ‘historical notice’ prefixed to Saunders’ sale catalogue, ‘presented the greater part of the Greek and Latin Classics, together with her numerous and highly valuable Italian books’ to her great nephew Christopher Philip Garrick. Furthermore, Mrs Garrick left books in her will to the value of £100 and £50 respectively to her executors, Thomas Rackett (1757-1841) and George Frederick Beltz (1774-1841). It seems likely too that family members chose to retain some books following the deaths of both David and Eva Maria Garrick.

According to a sale report in The Gentleman’s Magazine, the 1823 auction ‘exceeded … the most sanguine expectations of Mrs. Garrick’s executors’; in fact both men had attended the auction and bid successfully on 86 lots between them! Not surprisingly, the books under the hammer were scattered to the winds: many passed into the ‘splendid libraries’ of the aristocracy, although ‘booksellers of taste, spirit, and enterprize, such as Hurst and Co. Payne, Thorpe, Triphook, &c’ succeeded in snapping up trophies for their own stores. Book collectors, such as Thomas Jolley, a fruit salesman and potato dealer (trade must have been brisk!), whose own colossal library was sold between 1843 and 1855, were also present (there is a copy of the Garrick sale catalogue at the British Library which has been marked up with the names of the buyers and prices realised).

In recent times books from Garrick’s library have surfaced for air briefly in the public domain only to submerge again: in 2010, Bonhams auctioned Garrick’s copy of The Book of Common Prayer (1747), a gift to him from the Countess of Burlington in 1753, although it was not among the 1823 consignment. The locations of other books from Garrick’s library are recorded on the English Short Title Catalogue, although this is by no means a comprehensive list.

In 1917, while the V&A was fundraising for the acquisition of a suite of bedroom furniture belonging to Garrick’s collateral descendent Major Henry Trevor (23 books from Garrick’s library in his ownership were listed in Charles Sawyer Ltd’s catalogue in 1929), the Shakespearean actor, Henry Ainley (1879-1945)  revealed that he owned ‘a very good edition of Plato, and D.G’s bookplate on the inside’, which he offered to donate to the Museum.

Samuel Johnson, who had briefly taught the young Garrick at his school near Lichfield, did not offer a ringing endorsement of Garrick’s facility with the dead languages. James Boswell relates that Johnson said of Garrick that ‘He has not Latin enough. He finds out the Latin by the meaning, rather than the meaning by the Latin’. With such ‘small Latine’, I assume then that Garrick, like his hero Shakespeare, had ‘lesse Greeke’. Garrick’s library, however, was rich in classical texts, both in the original languages and in translation. The 1823 sale catalogue lists three editions of Plato: lot 1860, Plato’s Works, by Floyer Sydenham (1759), lot 1898, Oeuvres de Platon par Dacier, 2 vols (1701) and lot 2379, Sydenham’s translation of Plato’s Rivals, Meno and Lesser Hippias (1761). Unfortunately Ainley’s bibliographic description is so infuriatingly vague that it is impossible to tell which, if either, of these editions he was offering. You would have thought, however, that the opportunity to add (for free!) a copy of Plato, with its incontrovertible and enticing Garrick association, to the library would be too good to refuse!

But more compelling still is the fact that thanks to the Dyce and Forster bequests (the latter included a vast trove of Garrick’s autograph letters) the Library already owned several other books from Garrick’s library, including works of Italian drama, volume 7 of a presentation copy of Bishop Warburton’s edition of the works of Shakespeare (with a moving inscription in the hand of Mrs Garrick; the other volumes are in the Folger Shakespeare Library), and Love Elegies by Mr. H——nd (1743). Of the latter, Hannah More wrote in admiration of Hammond’s ‘Beautiful elegies, written … in the spirit of his master, the tender Tibullus’. Love Elegies is listed under lot 660 in the Catalogue of the Very Select Library of the Late Samuel Beltz, Esq. Collected by Himself and his Late Brother, Geo. Frederick Beltz, Esq., Lancaster Herald (1863) as one of the books that Mrs Garrick had bequeathed to George Beltz in 1822.

Ainley’s donation, however, was rejected – but not on bibliographical grounds. Rather, Cecil Smith considered the book ‘a little outside our function’ and was concerned that by displaying it in the context of the bedroom furniture, visitors might get a misleading impression of Garrick’s ‘habitual night time reading’. The bookplate (and so the Garrick connection) was of interest but ‘we can hardly take it for that alone’.

As a member of the Garrick Club from 1909-1934, I had hoped that following its rejection by the V&A Ainley might have donated the Plato to the Club’s library, which boasts other books from Garrick’s library among its collections. Unfortunately this was not the case.

If you know of the whereabouts of Garrick’s Plato, I’d be delighted to hear from you!

Please can you forward this enquiry to Nicholas Smith, archivist in the V&A?
I was interested to find that you are preparing a book on the library of David Garrick and I wonder if I might ask you for some help with a letter I have just come across on this topic? It is part of a large collection of autograph letters that once belonged to Miss Mary Anne Nichols, granddaughter of John Nichols (1745-1826), printer, antiquary, editor of the Gentleman’s Magazine and literary biographer. I’m cataloguing each letter in this collection as part of my project to prepare an analytical guide to the papers of the Nichols family between the time of John Nichols and the death of his grandson, John Gough Nichols, in 1873. This particular letter was written by William Harper of Bath, dated 23 April [no year, but probably 1769] and addressed to David Garrick. Harper has sent Garrick a catalogue of all the books (except modern ones) in Samuel Derrick’s library and he lists these in columns by folio, quarto and octavo on the third page of the letter. Apart from a short endorsement on the reverse, ‘Harper’s Letter about Derrick’s Books’ there is no annotation on this letter or any marks that suggest that it has been printed. I would therefore, be interested to know if you have come across it in the course of your research and whether Garrick did indeed acquire Derrick’s books for his library.
With many thanks for any help you are able to provide.
Julian Pooley