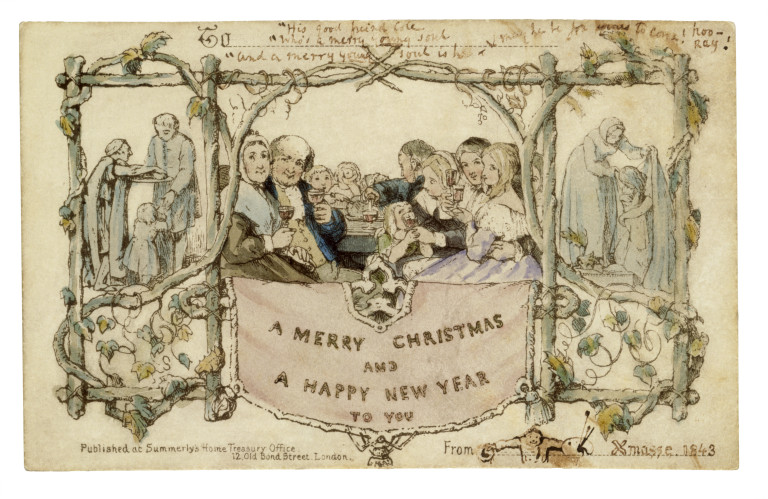 In 1843 the indefatigable Henry Cole (1808-82), who would later become the V&A’s first Director, devised the first Christmas greeting card (Cole notched up a lot of ‘firsts’ during his impressive civil service career). He commissioned John Callcott Horsley to design it. In his diary entry for 17 December 1843, Cole recorded that ‘In the Evg Horsley came & brought his design for Christmas Cards’.

For all his entrepreneurial flair and vision, I doubt even Cole could have predicted that this pragmatic seasonal gesture (he had too little time to write letters, apparently) would develop into a multi-million pound retail phenomenon. The Greetings Card Association annual report 2015 estimates that ‘the Christmas boxed card category is worth £200 million at retail and comprises 900 million cards in volume, arriving at a total market value of £1.6 billion at retail for 2014’ while ‘Christmas single cards show a value increase of £44m to £174.6 representing 13% of total value sales, with ARP of £1.55’. When one of Cole’s original cards was put up for auction in 2013 it sold for £22,000!

As we enter the festive season of office parties, secret Santa and staff pantomimes (the V&A Archive holds a complete set of V&A panto scripts since 1981) I thought I’d flip through Cole’s diaries to see what he and his family got up to at Christmas. It is immediately obvious that Cole did not take the opportunity to put on his slippers and relax. In fact he was as likely to be working on various projects as entertaining family and friends: e.g. 25 December 1851: ‘drafting Mem: on Visits to Foreign Galleries … playing with Children’. But it wasn’t all work and no play. On Christmas Eve 1849 the Cole children acted out charades and they all put up the Christmas tree.

The V&A ‘family’ was important to Cole. His diary entry for 25 December 1857: ‘Sappers dinner. RR & I were received with three Cheers’. The Sappers were Royal Engineers resident at South Kensington who photographed the Museum’s objects and served as an onsite fire brigade. The rousing reception that Cole and Richard Redgrave received conveys a sense of seasonal good cheer and affection.

Boxing Day was more family-oriented: ‘With boys to see Freickal the conjuror at St James’. Cole was impressed by his ‘Great skill in sleight of Hand’. As with many families, the Coles had their own Christmas traditions: ‘In the mg at breakfast according to custom, each plate was covered with Xmas presents from one to the other’ (25 December 1867). Cole records only infrequently in his diary the kinds of gifts that were exchanged: ‘Xmas presents. Gave Children their muffs’ (25 December 1859). Our expectations are rather different nowadays: apparently we spent on average £350 on gifts. Try reconstructing a Cole family Christmas and I wager there’ll be tears before the turkey has even gone into the oven!

Christmas 1863 was abandoned following the news of the death of William Makepeace Thackeray, novelist and a close friend of Cole. His entry for 24 December 1863: ‘News brought by Harry of Thackeray’s death in the previous night of one of his vomiting attacks. Went to see his daughters and to search for his will. None found’. On Christmas Day Cole went round to the Thackerays to help arrange the funeral and to investigate further the situation with respect to Thackeray’s will. He visited Francis Fladgate, a barrister and friend of Thackeray, who explained that ‘He had drafted a will for him wh: had never been executed he thought’. Boxing Day was given over to ‘Sending out notices of Th: death’.

On Christmas Day 1864 we find Cole in an unusually reflective frame of mind as he considers that this might be the last time that the whole family gathers together: ‘All our eight Children at dinner which may never happen again. Harry going to India the next year & not likely to return for seven years, if he has his health. My age 56 & though not ailing, beginning sensibly to wear out. Marian thank God better in health than she was a few years ago. The day passed so very cheerfully & happily’. What an elegant description of the process of aging: beginning sensibly to wear out!

Christmas Day 1868 seems to have been a bumper year for gifts: ‘Many presents exchanged’, Cole noted. The family attended Church where they heard ‘[Arthur] Sullivans new Xmas carol & Anthem, both very good & melodious’. The carol in question was ‘I Sing the Birth’. Afterwards Cole called by Anne Thackeray’s house and ‘left her a Roman Apron’. I’d not heard of a ‘Roman Apron’ before so I googled it. I’m none the wiser! I doubt that Ann Thackeray was into historical re-enactment – answers on a Christmas card… On Boxing Day Cole went into the Museum. He noted excitedly that it was a record breaking day in respect of visitor numbers: ‘More than 20,000 came during this day, the greatest numbers ever attending on Boxing Day’. Ever the public administrator, Cole kept a watchful eye on the all-important KPIs.

On 25 December 1871 Cole attended an afternoon performance of Handel’s Messiah (even then a Christmas institution it would seem) at the Royal Albert Hall. It was conducted by Sir Julius Benedict and featured an orchestra and chorus of 550 performers. Cole thought all the soloists good: Therese Titiens (soprano), Anna Drasdil (contralto), Sims Reeves (tenor) and Signor Foli [Allan Foley] (bass). ‘Chorus bad’, he noted tersely, which is unfortunate given the high proportion of choral numbers.

Christmas Day 1881 was to be Cole’s last: ‘Tishy gave me her Hunstanton Sketch of Cliff. Mary Pho: of all her children, and all the Children gave Marian & myself a case of Dessert knives and forks’. On Boxing Day he started reading Henry James’s Portrait of a Lady (a Christmas present?) observing in his diary ‘Fresh & incisive English’.

Among the entries I checked I found no reference to Cole’s engagement in the laborious exercise of writing Christmas cards. Ironically, in 1877 Cole himself was depicted in a Christmas card; caricatured in the very genre of stationery he had conceived thirty-four years earlier.

I feel sure that if Cole was alive today he would have embraced the concept of the e-card. If you’ve not bought your Christmas cards yet, check out the exclusive range of cards available in the V&A shop! 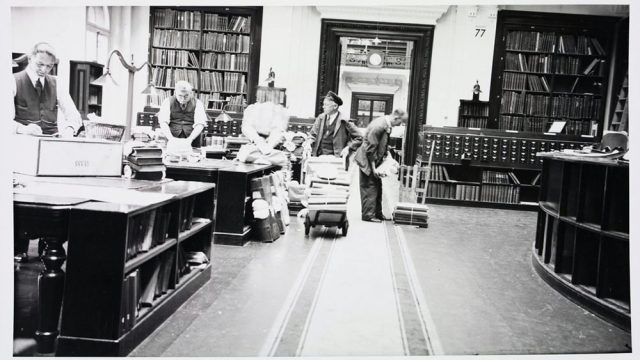