The renovation of the V&A’s Cast Courts has given me the opportunity to study and conserve one of the V&A’s most iconic objects, Michelangelo’s David – albeit in cast form. It’s tempting to think of a cast of a sculpture as something of an inferior copy, but the V&A’s plaster cast of probably the most famous sculpture in the world is much more than a simple reproduction of Michelangelo’s original. It is a work of art in its own right and a superb example of great craftsmanship and technical achievement.

Taking a cast of such a huge sculpture was no easy task. The cast, which was constructed by the Florentine cast-maker Clemente Papi in the 1850s is over five metres tall. While Michelangelo’s original was carved from a single block of marble, the V&A cast was created from hundreds (maybe even over one thousand) pieces of a plaster mould that was taken directly from the original. Although the V&A’s David is hollow (with a metal armature) and weighs about a third less than the original, like its Florentine counterpart, it stands supported only by its legs and the tree stump the figure is leaning against.

The V&A plaster cast of David was given to Queen Victoria in 1856 by Leopold II, Grand Duke of Tuscany. I’ve since discovered that David travelled to England in three separate crates on a schooner called the ‘Cheshire Witch’, and that it was one of the first objects installed in the new South Kensington museum when it moved to its present site in 1857. The photo below shows David just after he arrived, in the process of being installed in the galleries. Notice the strange ghostly figure to the right of the wagon carriage with the top hat – a double exposure, or maybe the spirit of the museum’s first director, Henry Cole caught on film overseeing the installation?? 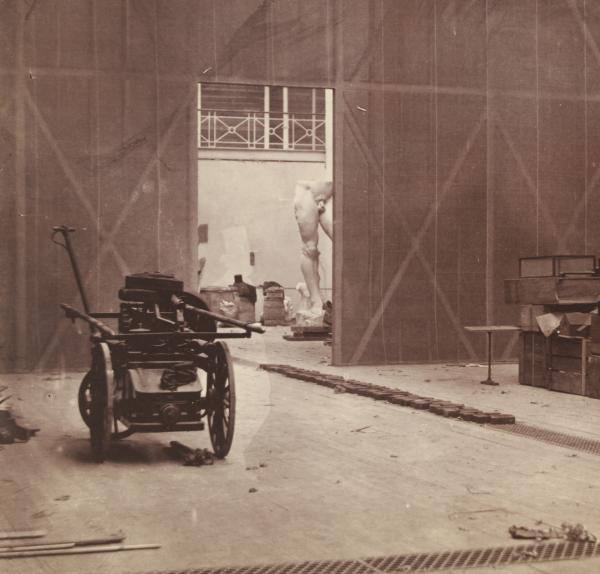 The story goes, that when Queen Victoria visited the South Kensington Museum and saw David in all his naked splendour, she was shocked, and the museum quickly had a marble fig leaf sculpted to cover David’s modesty for future Royal visits. This famous incident is often presented as the ultimate expression of Victorian prudery, but the figleaf has become an iconic part of the V&A’s collection, often requested for loan and visitors often ask about it. Most recently, you might have seen it hidden in a corner of the South Kensington ‘apartment’ of the fictitious and tragic architect Norman Swann in this year’s Elmgreen and Dragset’s installation, Tomorrow. 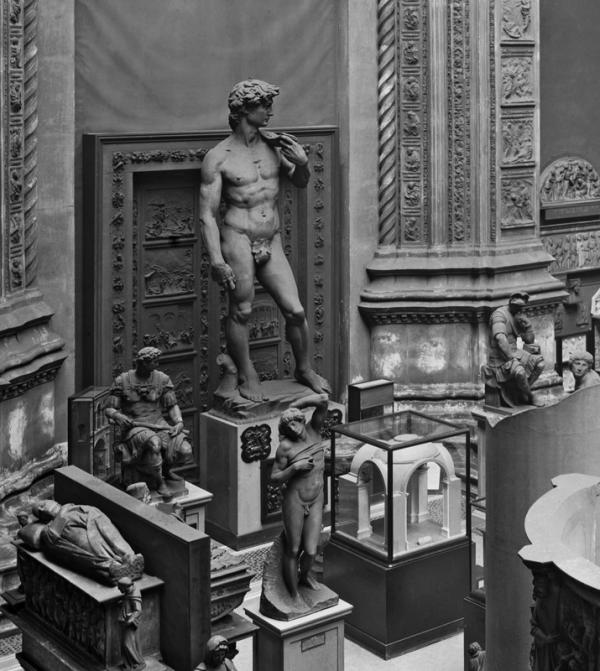 The renovation of the cast courts gives us the chance to examine and document the sculptures very carefully to gain a good understanding about their condition and how they were made. 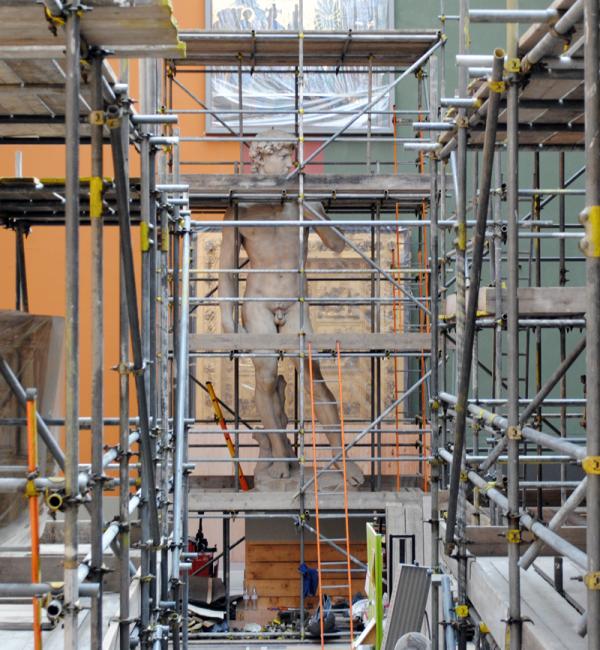 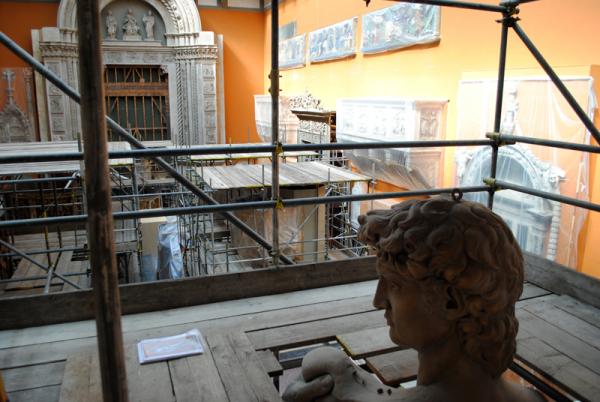 As you can imagine, walking about the scaffolding erected around the Cast Courts gives us an amazing perspective on the sculptures. With this in mind, I decided that we should make a film to capture this unique perspective. Working with the V&A’s Motion Media department and my colleagues in Sculpture Conservation, I arranged for Carlos Jimenez, a Spanish photographer and filmmaker living and working in London, to climb the scaffolding and create this captivating film on the renovation. I think that gives a good sense of what its like to be up close and personal with the sculptures:

Examining the surface of David up close, I discovered some pretty fascinating information. Carefully removing a thick layer of dust that had accumulated on the sculpture’s surface over the years, the surface is surprisingly clean. 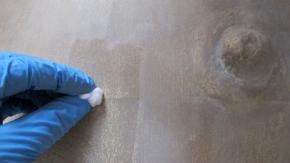 It was clear to me that David had received a number of coatings throughout the last 150 years. These layers actually help tell the story of how David was treated and conserved throughout his history at the V&A. Even more interesting perhaps, is that it captures a moment in time that tells us the exact condition of Michelangelo’s original as it was in 1856. The original marble is now kept indoors in the Galleria dell’Accademia in Florence to preserve its condition, and has been restored on a number of occasions since the V&A cast was taken. However, because the cast was taken before these 19th and 20th century restorations, it accurately captures the condition of the eroded and pitted surface of David’s shoulders and arms where years of rain and pollution had affected the original marble.

Before I could go about cleaning David, I needed to find out exactly what coatings had been applied to his surface, what their significance was, and how they might react to cleaning. Unfortunately the conservators working at the museum back in the early 20th century did not document their work, and so we don’t have a record of what they might have used. However, we are very lucky to have an expert Conservation Science team at the V&A, who could analyse and identify the coatings. 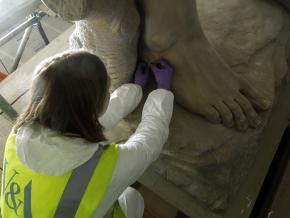 V&A Conservation Scientist Lucia Burgio took minute samples from the surface and examined them under a microscope as cross sections of the paint/coating layers. Another very interesting story emerged. Lucia found that the cast had been coated on three separate occasions, each time with a lead-based white paint. This was probably applied both to protect the surface, but also to try and imitate the colour of original marble. Knowing exactly what the surface coating is, gives me the information I need to choose the most appropriate materials to use when come to conserve David’s surface. 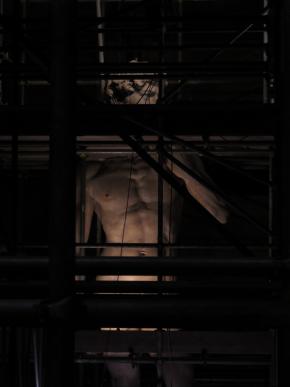 The conservation of the cast of David will ensure its preservation for future generations. My research into its construction and history continues as long as there are questions to be answered, and believe me, there are many! One important bit of research is to track down all of the other surviving casts of David, and find out whether any other collections have images of the inside of the cast and its internal metal armature, something that would give us a huge amount of information about how our David was constructed.

I am hoping that when the Cast Courts open again at the end of 2014 this wonderful sculpture, which we are so lucky to have in the collection will be looked at with new eyes, and continue to provide happiness to many.

Pingback: LGBTQ Tours at the V&A, October 2017 – Tincture of Museum