The Thotsachat painting (IS.43-2005) by an unknown artist, believed to have its origin in early nineteenth century Bangkok, Thailand, was gifted to the Victoria and Albert Museum by the Doris Duke South East Asian Collection as part of a group of eight paintings (IS.38- to 45-2005) (Figure 1). Thotsachat is the Thai name for the jatakas, Buddha’s birth stories. The paintings illustrate scenes from the Buddha’s previous lives.1 The panel consists of a single tropical wood panel tapering to the top (57 x 46 cm). It has an integral frame, which consists of four lengths of moulding with a half-lap joint at each corner attached with pins. The ground and paint layers really needed attention during this conservation treatment.

The off-white ground layer with a thin blue priming was very fragile. Its poor condition could be attributed either to the degradation of the binding media over time or to the paint being originally underbound. The paint, which appears to be gouache from its matt appearance, was brushed over the ground in mostly flat colours. Superimposed, fine lines defined the figures and other details. Gilding was used for some elements of the Buddha’s clothing and adornments. The water-soluble paint layer was powdery, pointing again to a binding medium problem. Paint was dramatically lifting and flaking off the support due to the tensions produced by the movements of the wooden panel and the weak adhesion between the panel and the ground layer (Figure 2). Many paint losses had already occurred, and consolidation treatment was urgently needed to prevent any further loss.

Sophie Reddington undertook the treatment of two other paintings from this series eight years ago while working at the V&A. She used EHEC (ethyl hydroxyethyl cellulose), applied as a mist with a nebulizer to strengthen the paint layers, and Lascaux Medium for Consolidation to re-adhere them to the support.2 EHEC’s high viscosity meant it had to be used in a low concentration so that it could be applied with a nebulizer, consequently reducing its adhesive power. At about the same time of this intervention, a new study was being carried out by doctoral researcher Tomas Markevicius at the University of Amsterdam: New Materials for Non-contact Consolidation of Unprotected Matte Media: Coupling Ultra Low Viscosity Cellulose Ethers with Ultrasonic Misting technique (https://aics47thannualmeeting2019.sched.com/event/Ium7/paintings-study-of-new-materials-for-non-contact-consolidation-of-unprotected-matte-paint-media-coupling-ultra-low-viscosity-cellulose-ethers-with-ultrasonic-misting-technique). This research focuses on the use of HPMC (hydroxyl-propyl-methylcellulose), a water-soluble cellulose ether that has a broad viscosity range. According to Feller, studies carried out in 1990 showed that HPMC possesses good long-term stability, equal to or better than more familiar methylcellulose products.3

After considering and/or testing other consolidants such as Funori and Aquazol, HPMC was tested (type Mobs 3P4 – viscosity: 2.3 MPas at 2% concentration at 20°C) with positive results. The low viscosity cellulose ether was used for the consolidation of the Thotsachat painting by applying it with a nebulizer in a first stage and subsequently by brush, on its own or mixed with sturgeon glue (Figure 3). HPMC could be nebulized at higher concentrations than EHCE and the addition of sturgeon glue added the greater adhesive strength required in some areas. The consolidation treatment was carried out on small areas at a time. By these means, the tenting paint and ground layers were given cohesive strength, made flexible so they could be laid down, and then they were re-adhered to the panel support.

Prior to the application of the adhesive, a mixture of water and ethanol (1:1) was misted to wet the paint layers and aid penetration. Then HPMC (5% in water) was applied with the nebulizer until the layers became more flexible. Raised areas were gently pressed down with a fingertip using silicone-coated melinex. The areas were then dried by placing small pieces of bondina, blotting paper, acid free cards and small weights over them. After a maximum of an hour, treated areas were uncovered and HPMC (2.5% in water) was applied with a brush around the losses and adhered flakes. A couple of drops of ethanol were added to aid the flow of the adhesive, which would soak in beneath the paint. Some passages, where the paint was thicker, required the addition of a stronger adhesive applied with a brush. Sturgeon glue mixed with HPMC (1:1 both at 4% concentration) was used in these instances. Small weights were used again while the adhesive dried. The process needed to be repeated several times depending on the rigidity of the lifting paint layers.

The consolidation of the Thotsachat painting was successful (Figure 4). HPMC proved to be a very useful material for the consolidation of matt underbound paint. The adhesive did not leave the surface glossy and its low viscosity allowed it to be nebulized at a considerably higher concentration than any of the other cellulose ethers commonly used in conservation. Hopefully further studies and tests using this material will secure it a place in the conservator’s cupboard: in the case of this Thotsachat painting, HPMC has proved invaluable. Now that the paint is secure, the panel is being considered for display in The Buddha Image in Asia, Buddhism, Room 47f, The Robert H. N. Ho Family Foundation Galleries of Buddhist Art.

Many thanks to Tomas Markevicius, who generously provided samples of HPMC, shared his research and provided guidance for its use. I am also grateful to Sophie Reddington for her previous work on paintings from the series which gave me a valuable starting point.

Preserving the designs for the Kensington Valhalla

A remedial conservation treatment for a victim of inherent vice 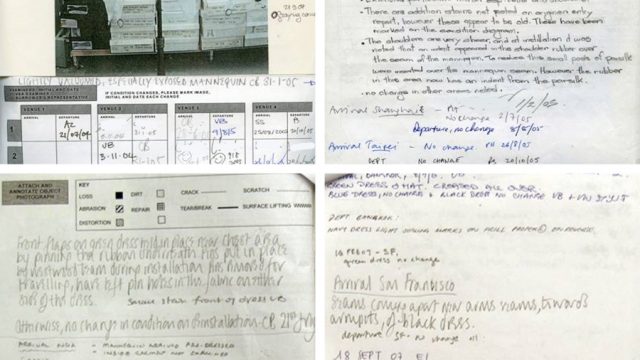