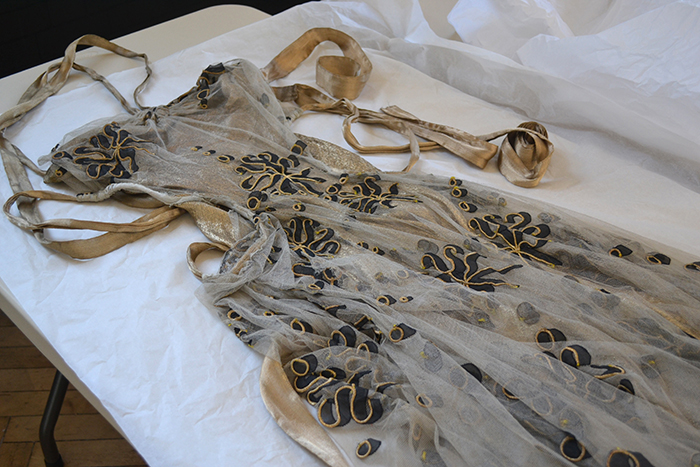 This beautiful dress was designed by Madeline Vionnet in 1937 and was given to the V&A in 1968 by Cecil Beaton. It will be on display in the Horst: Photographer of Style exhibition, due to open in September 2014. The dress will be one of 9 other examples of French couture from the 1930s, reflecting the fashions of the time which regularly feature in Horst’s photographs.

The dress is constructed from silk net with a gold and black appliqué design applied throughout, which sits over a gold underdress with long waist and neck ties. Unfortunately it is in a very fragile state, with many tears and splits to the silk net, probably as a result of wear and the weight of the appliqué design on the net. The net has greyed in areas and yellowed in others over time and generally looks in a sad state. The dress is in desperate need of conservation and has never been on display. In its current state it cannot even be moved much as it is so fragile. Susanna Brown, the curator of the exhibition, was particularly keen to have this dress as a beautiful example of 1930s French couture by an important designer.

Over the next few weeks I’ll be documenting the course of the 250+ hour treatment and give you an insight into an intricate conservation project on an important dress in the V&A’s collection, from assessment through to mounting the costume for display.

Looking forward to know more about the project.

Marvellous looking dress with a dramatic design – and I will also greatly look forward to seeing how you conserve this lovely garment.