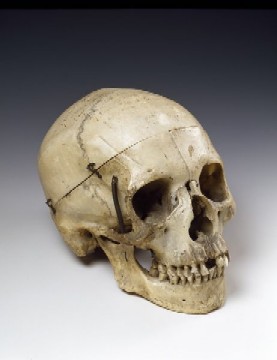 The V&A is the world’s leading museum of art and design, and as such, one might surmise that its conservation department would not have to deal with the issues surrounding human remains.

That said, the theatre and performance collection at the V&A contains a number of unusual objects, one of them being this somewhat macabre human skull: 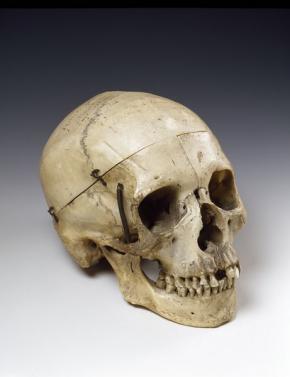 This particular skull however has an interesting background. Sadly, we don’t know whose body it originally  belonged to, but it was given as a gift to the great French actress Sarah Bernhardt (1844-1923) by the novelist Victor Hugo after her much-lauded performance in his play, Hernani in 1877. Subsequently, when she played Hamlet, she often used Hugo’s skull as Yorick’s when she played the famous grave scene.

Bernhardt had a passion for surrounding herself with macabre objects. According to several accounts at the time, she slept in an adapted coffin for three years (some say to rid herself of her mortal fear of being buried alive). She also used another human skull (known as “Sophie” – alledgedly a frail, unfortunate actress from the Quartier Latin in Paris who had died in hospital) as a holder for letters and cards. Sophie, like Hugo’s skull, had a jaw fitted with springs and was covered in signatures and witticisms by Bernhardt’s many visitors. This led one journalist to observe that “poor Sophie has more lines written on her in death than she ever had in life.” 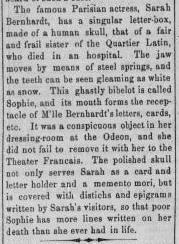 Victor Hugo preferred to inscribe a verse in French celebrating the joy of the spirit in contrast to its lifeless container:

To us today this all seems in pretty bad taste. Yet, as conservators we often have to deal with ethical issues relating to culturally or religioulsly sensitive objects. For objects like Bernhadt’s skull, despite the celebrity of its owner, its inscription, and its ultimate status as a theatre prop, the skull is still considered human remains, and thus must be handled, treated and stored with respect and sensitivity. In the conservation of such objects, we are conscious of the need to afford the dead respectful treatment but also to avoid offending both religious or secular sensibilities. As English Heritage puts it: “Respect for the dead is a feature of most world religions; it is also upheld by many with no specific religious beliefs. The concept of respect for the dead should form the core of ethical treatment of human remains.”

Conservators at the V&A and throughout the world follow a strict code of ethics which governs the ways in which we approach heritage objects of any kind, whether it is a painting by Raphael or child’s action figure. This is formalised by our professional organisations, and is something that is consistently under discussion in our day to day work before we even come close to carrying out practical treatment on an object.

Excavated human remains, or those that are disturbed during archaeological investigation are generally reburied in a consecrated location. Science museums hold human remains for study, as they are is often an important source of vital information about our past. Naturally a wider and more complex issue that many museums deal with is the repatriation of human remains from indigenous peoples all over the world, and this is a debate that has garned much media attention, and is ongoing throughout the museum world.

Sarah Bernhardt’s skull is a curiosity. Neither anthropological object, nor of particularly interest as an object of scientific importance, it remains at odds with classification. As conservators, we can only handle and store it with the respect it deserves as both as an historical and cultural object history and also as human remains.