Today is International Archives Day (yes, we have our own day!) so I thought I’d use our archives to illustrate one of the more controversial episodes in the V&A’s otherwise long and distinguished history of object collecting and display.

‘An exceedingly vulgar show’ (The Times)

Pity the curator who opened the newspapers at the letters page only to be confronted by these stinging criticisms of his recently installed exhibit of “New Art” furniture! Records in the V&A Archive document the unhappy episode.

It had begun promisingly enough. In 1900 George (later Sir George) Donaldson (1845-1925), ‘an accepted authority in all matters pertaining to furniture modern and old’, had been elected Vice-President of the Jury of Awards for Furniture at the Exposition Universelle in Paris. Hearing that the V&A was proposing to spend £500 on ‘Modern Art Objects’, he wrote to the President of the Board of Education offering to help select ‘the best of “Art Nouveau” furniture’ and to supplement the grant with a personal donation ‘to the extent of several Thousand Pounds’. Suffice it to say the Board was delighted.

During his ‘daily round of jury work’, Donaldson passed through Siegfried Bing’s  L’Art Nouveau Pavilion, where he selected a table and chairs by Eugène Galliard. 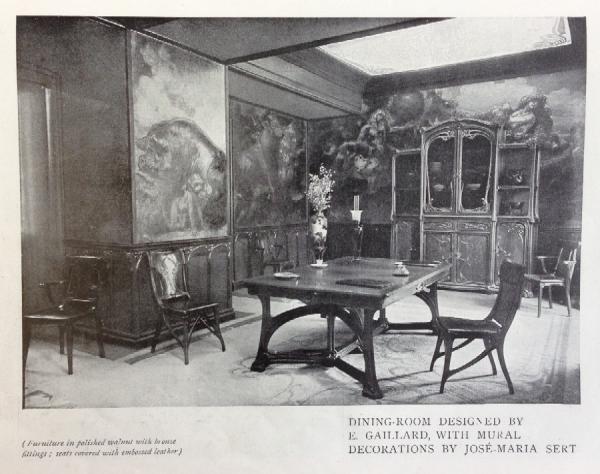 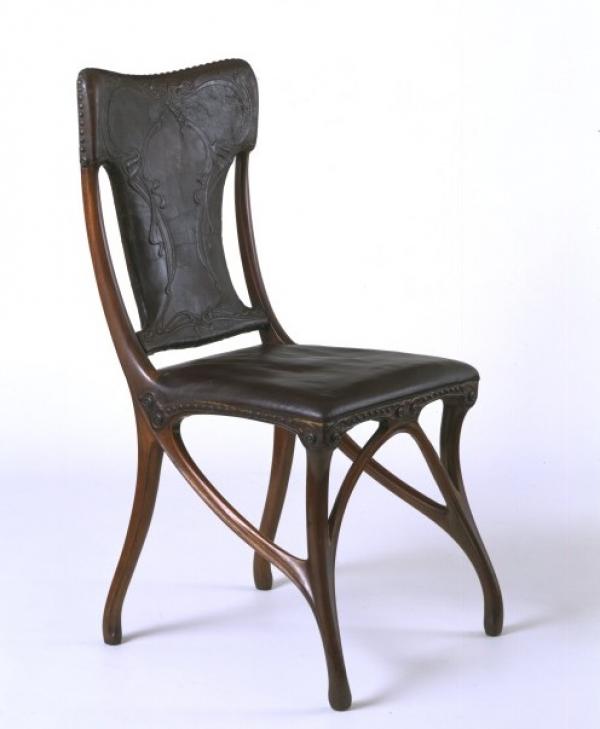 Among the other designers that caught Donaldson’s discerning eye in the course of ‘three weeks daily study of furniture’ were Louis Majorelle, Emile Gallé and Carl Spindler.

Donaldson’s letter to the Board of Education has an almost manifesto-like quality: it reveals that he had an intuitive sense of the Art Nouveau movement’s significance to the future of design and at the same time anticipates the battle lines along which the critical reception of his gift would be fought (ahem, debated):

“However much this New Art may conflict with our classical standards or ideas of architectural basis, I am forced to the conclusion that we are in presence of a distinct development. Where it will lead to none I think can foretell. But, in these competitive days, and in view of the fact that millions of people will be unable to visit this end of the Century Exhibition, it occurs to me that it is of great importance to our people that the best models of the style called “New Art” should be purchased and placed before them.” 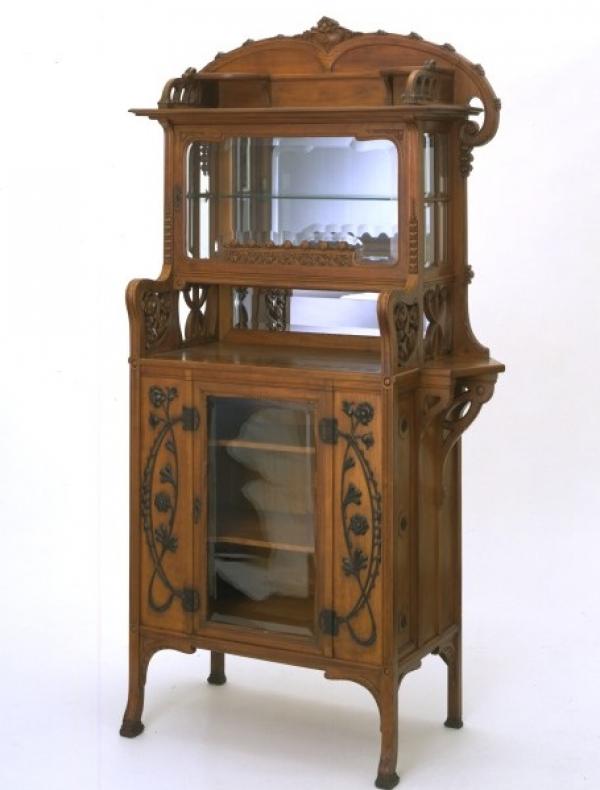 The Donaldson gift was swiftly displayed in the V&A’s Tapestry Court and a press release circulated which both praised Donaldson’s generosity and dilated on the striking novelty of the objects he had selected. 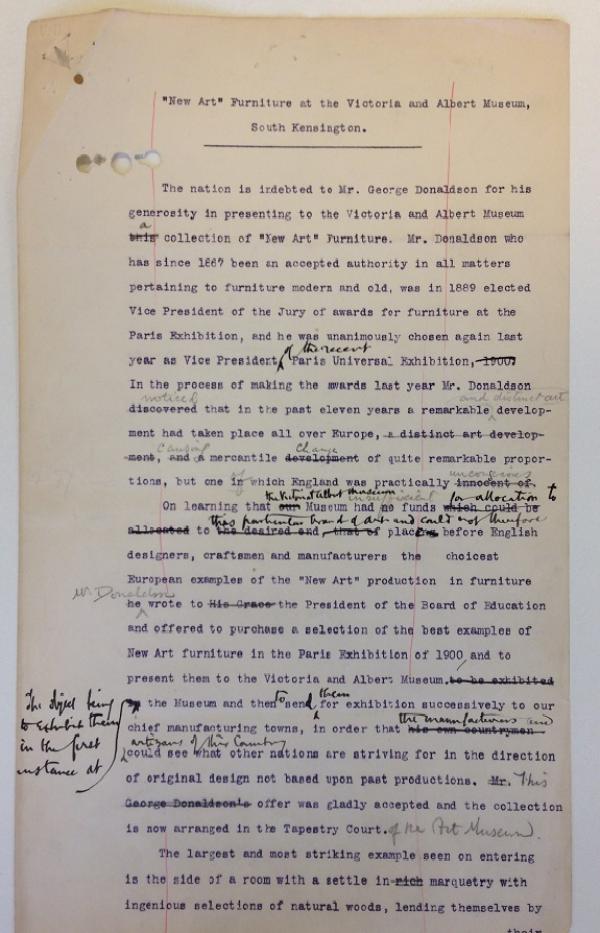 Unfortunately the display was greeted not with coos of gratitude but howls of protest. The V&A’s Committee of Advice for Art led the charge, writing to the President of the Board of Education of its regret that ‘the beautiful tapestries and furniture … have been concealed or removed to make way for a so-called ‘New Art’ collection’. 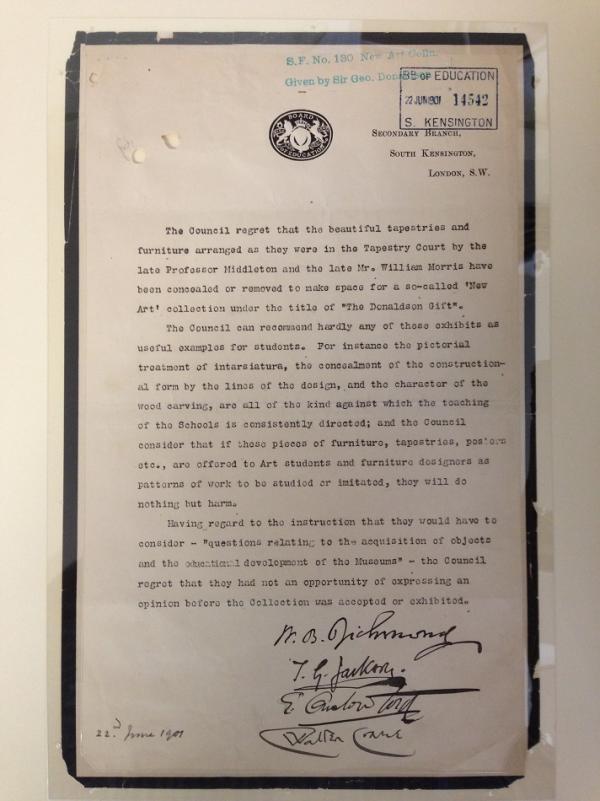 This was an internal document; it was not long, however, before these rumblings of discontent found a more public vent in The Times and Manchester Guardian. Art and Design cognoscenti quickly leapt on the band wagon and penned vituperative epistles ‘To the Editor’ deploring art nouveau’s ‘debased forms’, wild extravagances and corrupting influences on young British cabinet makers. A lone voice of support came from the editor of the Magazine of Art who argued valiantly that the art nouveau’s ‘first impulse’ was in fact British (William Morris), not Continental. He was quickly slapped down for this affront to Morris’ shade.

In a panicky internal memo, Alan Cole wondered if it would be possible ‘to have the Collection removed say to the space which was used for the Exhibition of Modern Illustration’. In fact the objects were banished to the V&A’s outstation at Bethnal Green; with delicious irony Bethnal Green Museum was the very place that Donaldson had hoped the collection, under the auspices of the Circulation Department, would be exhibited at first! 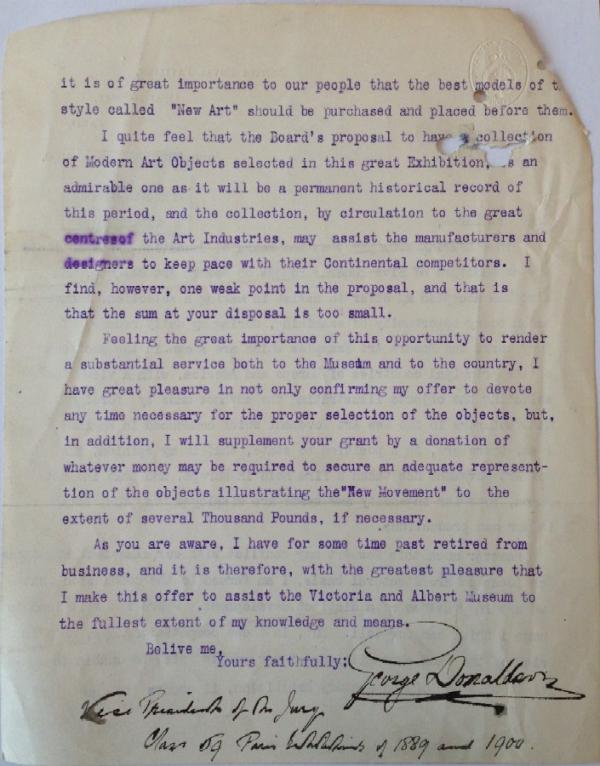 In spite of, or perhaps because of, this notoriety, museums, polytechnics and art schools in Birmingham, Edinburgh and Dublin raced to borrow the collection (Donaldson had envisioned the collection being sent ‘to the great centres of the Art Industries’). The V&A’s officers, presumably relieved to be rid of the stuff, insisted nonetheless that a disclaimer was displayed which warned visitors that ‘Much of the modern Continental furniture exhibits a style which is not consistent with the teaching at Art Schools in the United Kingdom’ and accordingly that ‘students inspecting the examples in this collection should be guided, in forming an opinion as to their merits and obvious faults, by instructors who have given attention to such subjects as Historic Ornament, Principles of Ornament, and Architecture’. 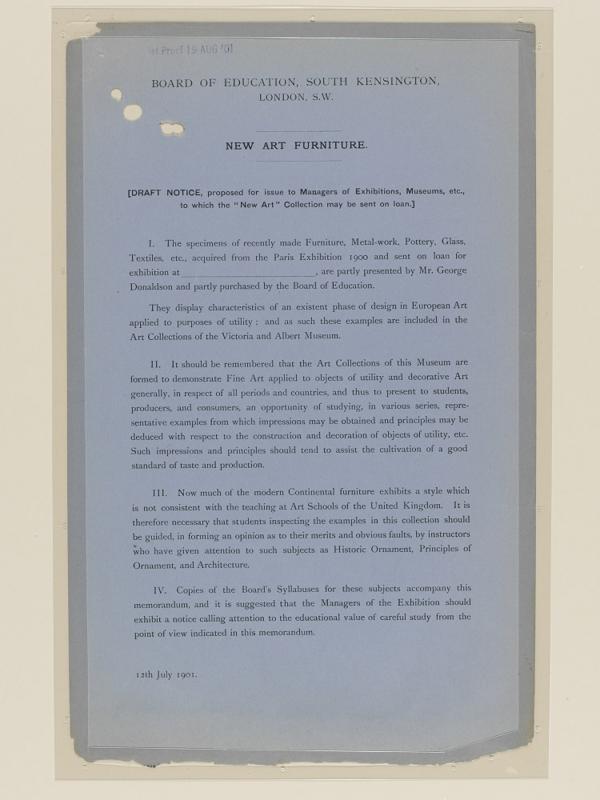 Sadly this capitulation in the face of hostile criticism undercut the force of Donaldson’s altruistic (patriotic, even) gesture that ‘the collection … may assist the manufacturers and designers to keep pace with their Continental competitors’.

Different companies organize the exhibitions to exhibit their antique furniture and other atoms.

Interesting blog. In my own research of 2006-7, I found it was the director of the V&A Sir Caspar Purdon Clarke, who initiated proceedings when he wrote to the Secretary Sir William Abney requesting a budget of around £500 to purchase a collection of ‘New Art’. He also mentioned in a couple of correspondences that he would be accompanied by Sir George Donaldson and sculptor Onslow Ford of the Advisory Council of the Royal College of Art. Ford was taken ill on the trip however, so it was left to Clarke and Donaldson to make the selection. On perceiving the budget of £500 too small to make a worthy sample, Donaldson then offered to supplement it with a gift of his own.

A question which looms large is why Clarke chose to acquire a collection of ‘modern’ art at a time when the Museum had from 1880 already relocated a large quantity of its modern collections to the Bethnal Green Museum, specially designating it for the Museum’s modern collections? Given that the V&A was undergoing a major rearrangement 1899-1909, where it was separated from the Science Museum to become a museum solely dedicated to art (in fact an early twentieth century art museum) it is likely I feel that Clarke anticipated or hoped the Museum in the future would continue to exhibit modern and contemporary art.

Unfortunately, the Museum after rearrangement almost completely excluded objects made after 1825, which continued until the Circulation Department was closed under Roy Strong’s Directorship around 1978. Nikolaus Pevsner also wrote about the New Art Display of 1901, in his book ‘Pioneers of Modern Design’, in which he argued the furore that followed was instrumental to Britain’s departure from modern and contemporary art and design in the early twentieth century.