As part of my research project for a MA in History of Art with Photography at Birkbeck, University of London, I visited the V&A Archive to see the photographic guardbooks, 854 Imperial folio-size volumes that contain within their pages a unique visual record of objects that the V&A has both acquired and been lent between 1856 and 1995.

In many respects the guardbooks embody the V&A’s founding emphasis on the instruction of students and the general public of the merits of good design (1). Despite their sombre hard covers, their unwieldy size, and the embossed lettering on their spines, the pages inside have a sense of the hand-made and scrapbook about them; photographic prints are pasted straight on to the large and (sometimes) fragile leaves of these beautiful books.

While turning the pages a pattern emerges; all the images are composed as direct, head-on shots. Each chair or sculpture or enamel fills the picture plane as if a specimen pinned to a board. But among these specimens you glimpse suddenly a camera on a tripod: it is in a mirror, its reflection caught in the process of taking the photograph. 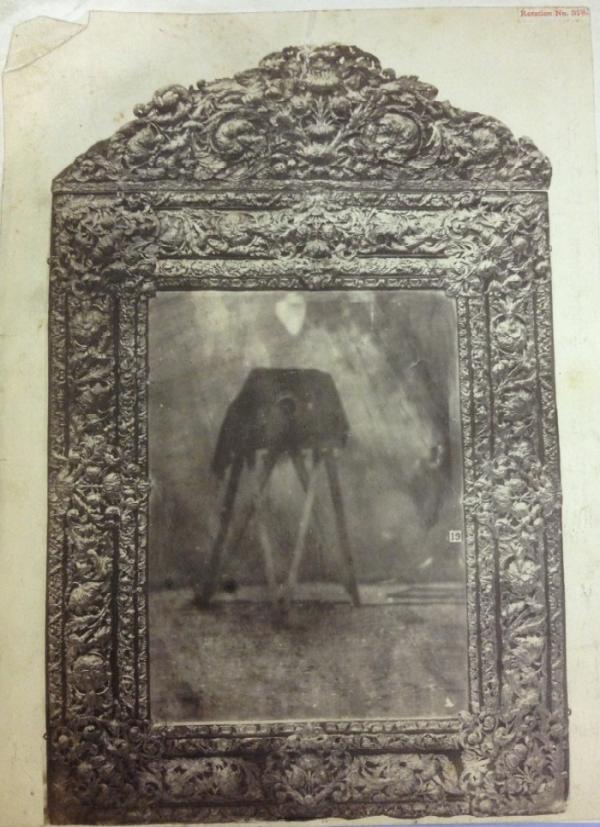 And then another mirror: this time, a lone box beneath a vast sky peers out above the edge of the frame. 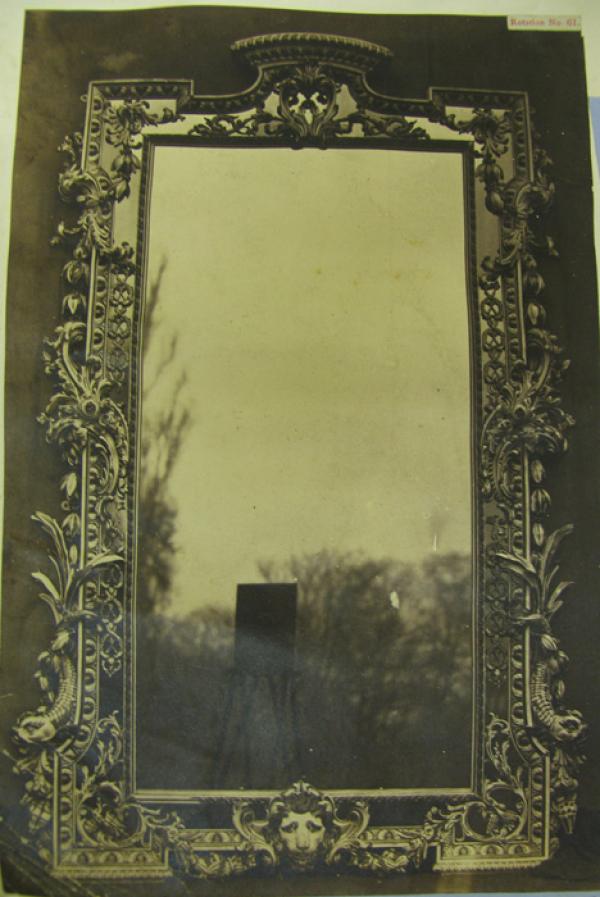 Then, more intriguingly, a man appears: he stands, left arm bent as he holds up a pocket watch, his head bowed with intent. He is timing the exposure for his wet collodion negative and is entirely oblivious to us looking at him. 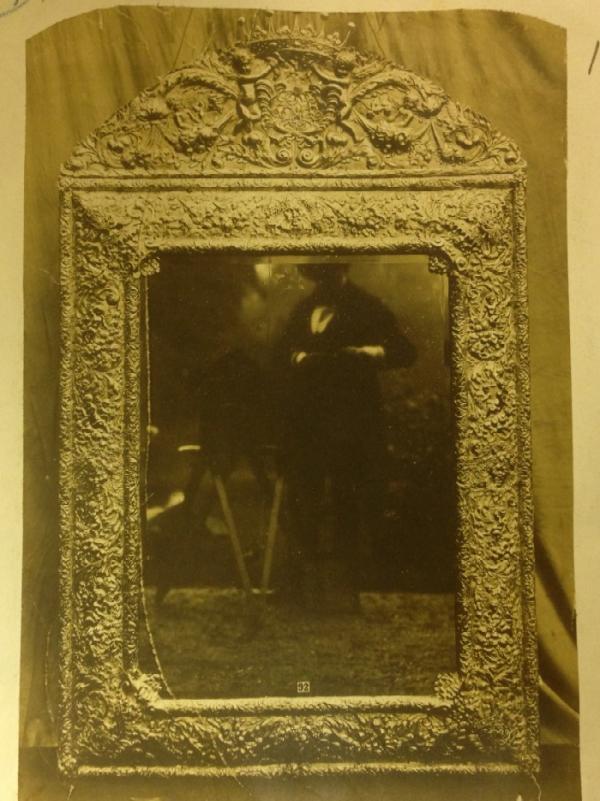 In 1856 Henry Cole (1808-1882) appointed Charles Thurston Thompson (1816-1868) as the first ‘Official Photographer’ at the South Kensington Museum where he was responsible for making photographic records of the museum’s growing collection of art. While Thurston Thompson enjoys a textual legacy among the records of the V&A Archive, has he also inserted himself pictorially into the archive?

In the next photograph (negative 55) we see clearly a Victorian gentleman, cropped at the legs, leaning nonchalantly against his camera. He is caught forever in the act of taking a photograph. Is this Thurston Thompson? 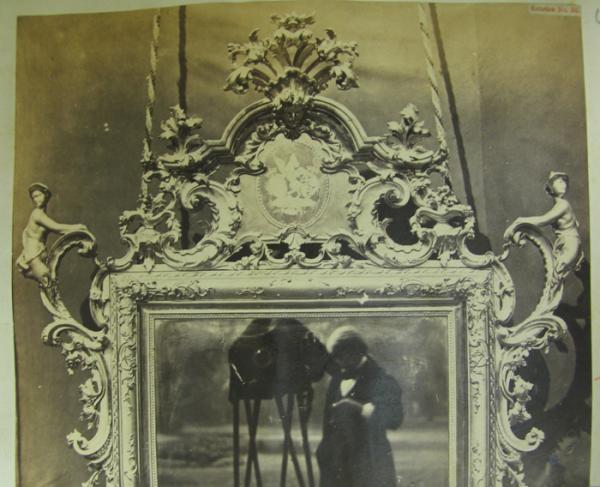 There is a pendant to this cropped image in the collection of the V&A’s Photography Section. 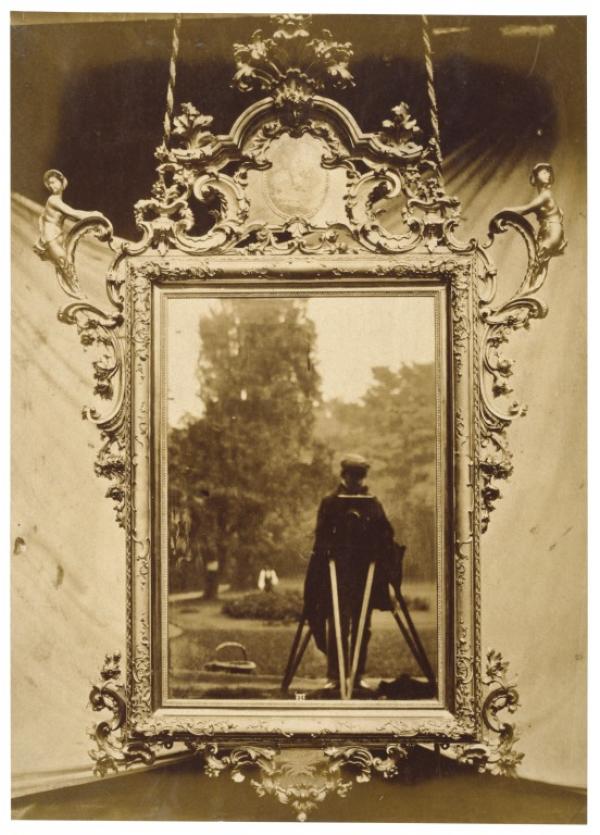 It is the same mirror; however, this time we see the moustachioed Victorian photographer full length. Is this the same person who is in the cropped image? The sun reflects of fthe leather uppers of his shoes and his head is bowed as he concentrates on his exposure time. Yet brilliantly in this photograph, an expansive and luminous view of the garden in which the picture was taken is reflected back at us. We can even see a white-sleeved figure (a gardener?) in the mid distance.

Mirrors and photographs have been associated with one another since the early days of photography. Writing in 1859, Oliver Wendell Holmes called the daguerreotype ‘the mirror with a memory’ (2). The camera, like the mirror, but in contrast to a painting or drawing, offers an immediate image, which is one of the reasons why photography became the medium of choice for documenting the world, its people and artefacts. 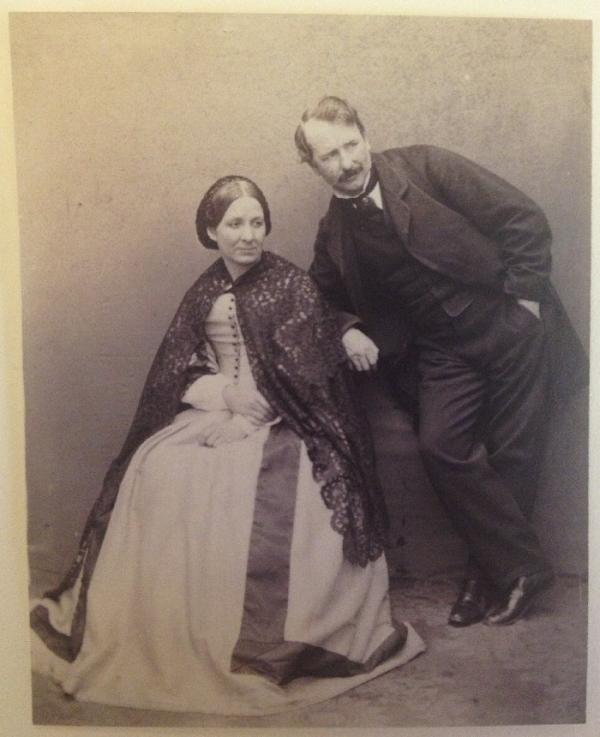 Photograph of Charles Thurston Thompson and his wife. Museum no. PH.835:13-1987. © Victoria and Albert Museum, London

However, there is a paradox at work in these photographs of mirrors. Thurston Thompson and his team of Sappers had a job to do – namely, to ‘document’ these objects – and clearly strenuous efforts were made to present them legibly and with as much detail as possible; in 1856 J. C. Robinson, the V&A’s first curator of art, wrote admiringly of the ‘perfect accuracy with which objects of art can be copied’ by ‘this extraordinary process’ (3).

The photographs were composed carefully: a backdrop of plain drapery serves to draw attention away from any background diversions and onto the object itself; all the objects are photographed directly, face-on and fill the picture plane. But perversely, the mirrors refuse to play this game and talk back to us. In spite of the photographer’s attempt to focus our attention onto the beautiful Venetian mirror, our gaze is transferred onto the photographer himself. He leaves us wondering who is this we are looking at?

P.S. Since visiting the Archive and writing this blog, the V&A has located the above photograph of Thurston Thompson with his wife. It is hard to claim with absolute certainty that the man in each of the mirrors is Thurston Thompson himself – but the moustache is there, as is the jaunty pose as he leans on camera/wife. And his shoes shine! So perhaps it is him? What do you think?