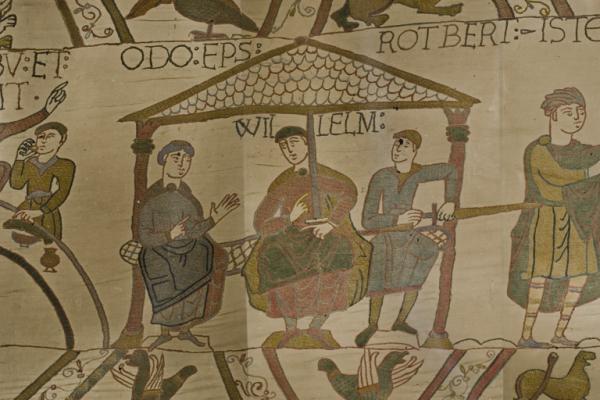 It seems extraordinary but the V&A once owned a piece of the Bayeux tapestry!

Measuring 3¼ in x 2½ in, it was one of two fragments removed surreptitiously (?) by Charles Stothard (1786-1821) sometime between 1816 and 1818 when he was engaged in producing a full scale drawing of the tapestry for the Society of Antiquaries, London. Charles Dawson described the fragment as ‘clean cut out of the upper border with a semi-lunar cut, as if hurriedly done with a pair of scissors’ (1).

Defending her husband’s actions in later life, Eliza Stothard (1790-1883) claimed that the two pieces had been removed from ‘a mass of rags at the end of the tapestry … which were quite incapable of restoration’ (2). The fate of the second piece, purchased after Stothard’s death (he fell off a ladder while tracing a stained-glass window) in 1821 by Sir Gregory Page-Turner, is not known (3). 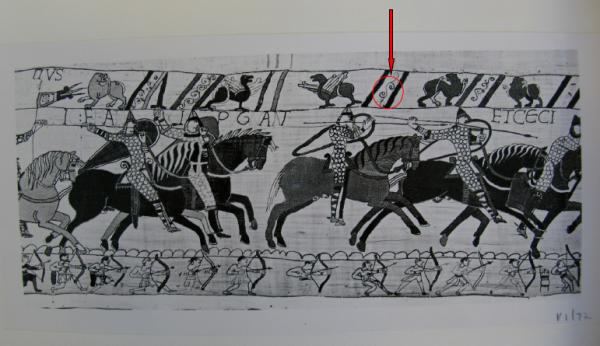 A guardbook in the V&A Archive contains a complete photographic record of the Bayeux Tapestry. One of the fragments (the V&A’s?) was removed from the upper ornamental border of the fifth scene depicting the Battle of Hastings. V&A Archive, MA/32/854. © Victoria and Albert Museum, London

In 2012 the Guardian newspaper published a photograph of a curator holding a replica the notorious fragment.

In 1864 J. C. Robinson, the V&A’s art referee, spotted the fragment at the last minute among the effects of the late John Bower Nichols (1779–1863), a printer and antiquary, which had just been consigned for auction. In a hastily scribbled memo to Henry Cole, the V&A’s director, Robinson requested permission to instruct the dealer William Chaffers to offer up to £10 for ‘some fragments of the Bayeux tapestry at Mr Bower Nichols’ sale now in progress’ (4). 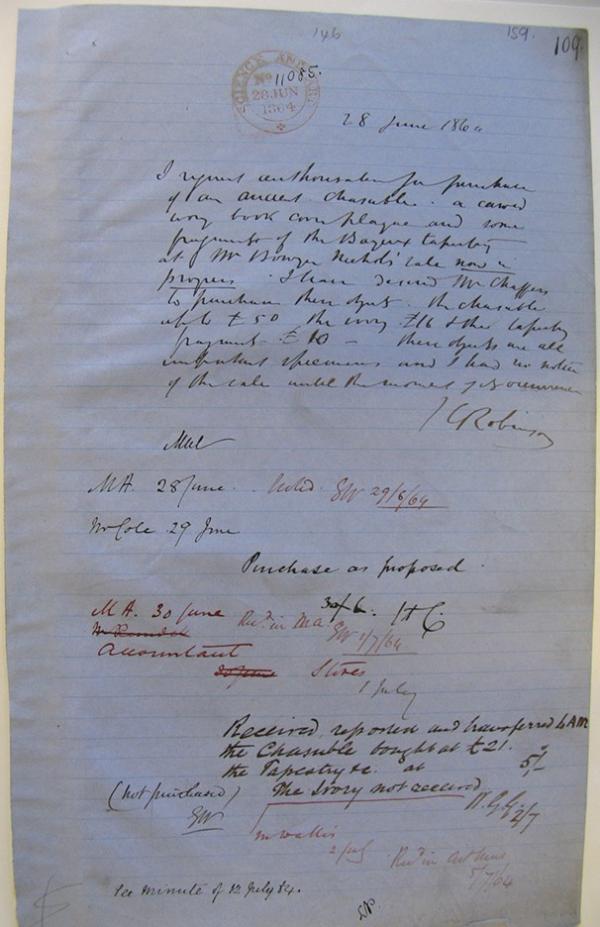 The fragment was acquired along with two coloured plaster casts of details of the Bayeux tapestry (Kings Harold and William), which Stothard had also made. 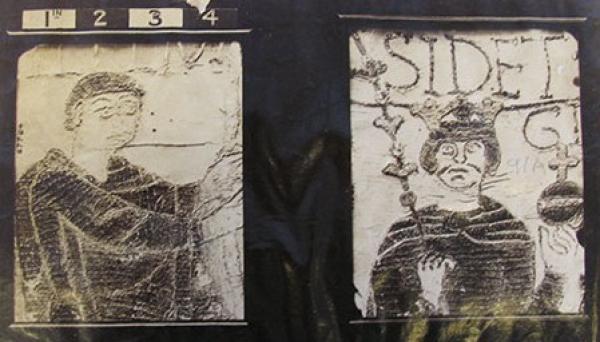 These souvenirs had previously been in the possession of the antiquary Francis Douce (1757-1834), who subsequently bequeathed his ‘miscellaneous curiosities of every description’ to Sir Samuel Rush Meyrick (5). They were displayed in Meyrick’s neo-Gothic castle, Goodrich Court in Herefordshire, until John Bowyer Nichols acquired them sometime after 1843. 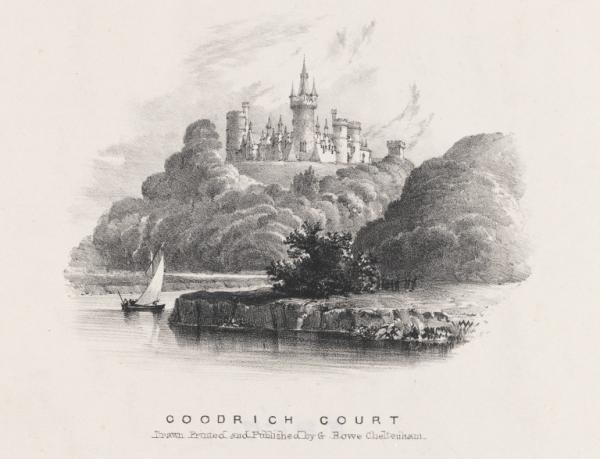 According Meyrick’s catalogue of the ‘Doucean Museum’, the piece of tapestry had been ‘cut off the end, [and] brought by him [Charles Stothard] to England in December 1816’ (6).

In his 1870 catalogue of the V&A’s textiles collection, Dr Daniel Rock described the fragment as follows:

Piece of the Bayeux Tapestry; ground, white linen; design, two narrow bands in green edged with crimson (now much faded) with a very thin undulating scroll in faded crimson, and green between them.

Rock claimed that plate 17 of Charles Stothard’s ‘Vetusta Monumenta’ (1885) ‘shows, in large, a portion of this embroidery where the piece before us is figured; and, from the writing under it, we learn that it was brought away from Bayeux by Mrs. Stothard, when her husband was occupied in making drawings of that interesting record’ (7).

As the V&A authorities would later discover, however, Rock’s claim was incorrect on both counts, and Eliza Stothard was for many years ‘gibbeted in reputation’ for the theft of the tapestry fragment (8).

7. Dr Rock, ‘Textile fabrics: a descriptive catalogue of the collection of church-vestments, dresses, silk stuffs, needlework and tapestries, forming that section of the Museum’ (1870), 6-7