The current sequence of this digitisation project involves the pages of the Guard Books 1930 – 1949, and it has enabled us to look some of the differences, or indeed, the similarities of the process of photographing an object, during this period as compared to the present day.

The Guard Book pages are of a bespoke size of 22 1/8 in x 14 ½ in, being between the Imperial paper sizes of Crown & Demy, all the prints seen on each page are the actual size of the negative concerned, and vary from 15” x 12” images of textiles, to ¼ plate size (3 1/8th” x 4 1/8th”), with the latter being mainly portrait miniatures, which are usually photographed same size, they were also used for details of objects, as seen below, showing maker’s marks of ceramics.

Each of these prints were hand-developed, from hand-developed glass negatives, photographed with a plate camera that supported the various sizes. They were glass plate backed for viewing (upside down), had a simple lens without a shutter, with focusing, rising front & back, and vertical plane all done by bellows extension.

These were still being used in the 1980s, I should know, when part of the Photo Studio, I was using a camera very like the one below, a Burke & James 10×8 Plate Camera, probably from the 1920s, as it has red bellows, which were phased out during this time.

In some areas of photography of objects, the style & technique has barely changed. The example below of is of a tea caddy with cut glass bottles, the colour image was taken in 2008.

Compare it to the image taken 70 years earlier, the format & style is virtually identical, the photography of an object “as it is” requires the same care & attention. Lighting, setting the subject and choice of background, all have to be taken into careful consideration, but the techniques for doing so haven’t changed that much over the years between these examples. 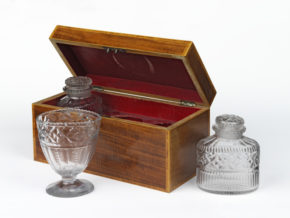 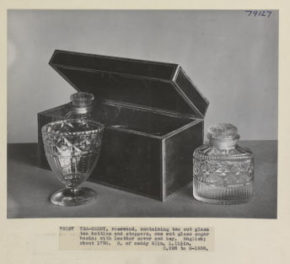 Going back to the early in the 1850s, when photographs of objects started at South Kensington Museum, there was a trend, however, as the museum was beginning to collect Photography as Art, for objects photographed be given a creative style, in groups of objects, or sometimes with draped backdrops as seen below.

As the years passed objects were increasingly photographed to show them as they actually are, lit properly to show details and with a plain background.

What we do see slowly appearing just after the after World War II, however, are some items being photographed to show how they may be seen, once more, using a creative setting.

The example right is of a terracotta sculpture in three differing styles, all taken at the same time, with varying degrees of creativity;  with moody lighting and modern artistic backgrounds. Some more successful than others…

…as It might have been taken a little too far with the sculpture of a River God, having a background of a fishing net!.

On a final note…,

…there was a small trend during this time, in models actually wearing the collection, including in 1934 a young lady wearing a George I costume… something that might cause the Textiles Collections and Conservation Department today, to definitely have nightmares, and not sleep very well at all.