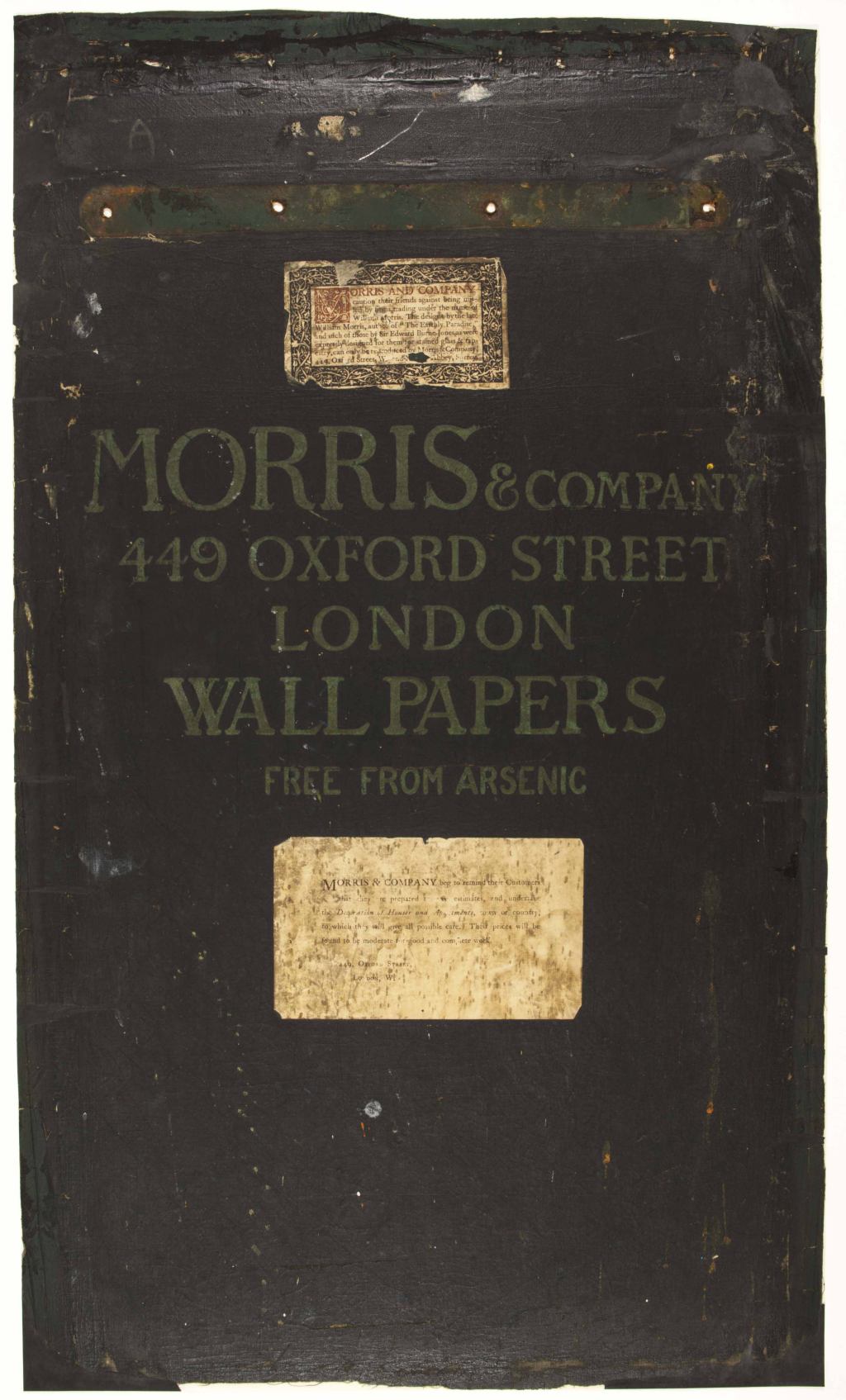 It seems that V&A Conservation are in favour at the BBC at the moment. This week, V&A Senior Paper Conservator Susan Catcher is featured on the BBC Four documentary, Fabric of Britain: The Story of Wallpaper, talking about the difficulties (and dangers) of treating wallpaper containing arsenic.

Prior to the late 18th century, there were few pigments that produced a bright vivid green, so the discovery of the vibrant Scheele’s Green in 1778 (and its replacement, the more durable, Emerald Green in 1814) were met with great popularity. Aside from wallpaper, Scheele’s green and Emerald green were used in household paints, wax stoppers for wine bottles, as a paper and textile dye, and even in sweets and children’s’ toys. All of which is rather surprising since both pigments contained arsenic.

Arsenic was used widely in the 19th century for a number of applications, and the dangers of arsenic greens were widely known at the time. Even Mrs. Beeton’s household manual warned against using ‘Brilliant (emerald) green which as she put it, had a ‘pernicious influence on the health’. Indeed, James C. Whorton in his book “The Arsenic Century”, notes that by the late-19th century, numerous poisonings and several deaths were attributed to exposure to arsenic greens found in clothes and fashion accessories. He notes that the dangers were considered to be so great that a simple test was formulated specifically for women who might find themselves shopping for clothes and coming across a suspicious green fabric. The test, which was published in the Times, positively identified arsenic green dyes in any suspected green garment. Arsenic greens contained copper, and since ammonia solution turned a blue colour in the presence of copper, it was therefore suggested that if ladies were to carry about a phial of ammonia “instead of the usual scent bottle”, a drop of the substance on the fabric “would betray the arsenical poisoning and settle the business immediately.”

The arsenic greens became popular for wallpaper printing and house paints by the mid-19th century. However, the dangers of using it for these applications were certainly known. Particularly frightening perhaps was the combination of arsenic greens on wallpapers and paints, and the damp walls on which they existed, which together could in theory produce a dangerous and toxic arsenic vapour, blamed for many maladies and deaths at the time. 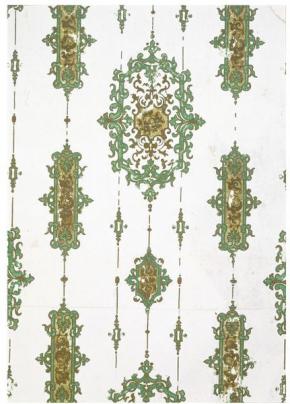 Possibly the most famous, though sadly apocryphal, tale about the lethal consequences of arsenic-containing wallpaper is that it was responsible for the death of Napoleon, who was supposedly finished off by the arsenic vapour in his damp rooms at Longwood House on the island of St. Helena. A little too good to be true (he most likely died of stomach cancer), this was finally disproved in 2007 (although it is true that there was an arsenic-containing wallpaper in the Drawing Room at Longwood, so the wallpaper was unlikely to have done much to improve Napoleon’s health).

Recent research published in the journal Nature has shown that some early William Morris wallpapers were printed with arsenical pigments (perhaps not surprising given that Morris’s father owned the largest copper and arsenic mine in the country). However, due to public concern, Morris & Co. was forced to find alternatives, and made this clear to their customers by printing a disclaimer on the cover of their stand book (now in the V&A) below. 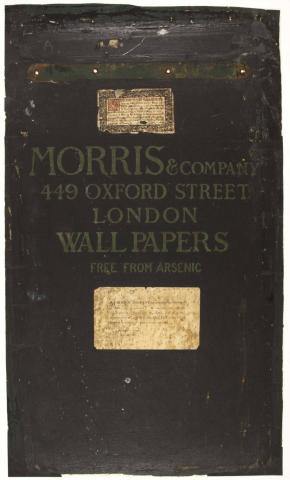 Even more than a hundred years later, there are still issues for V&A Conservators working on arsenic-containing wallpapers. The Morris & Co. stand book was conserved by Book Conservator Anne Greig in 2011. Health and Safety being paramount, before any conservation work was begun, instrumental analysis of the green pigments on the wallpaper samples was carried out by the V&A’s Conservation Science department in order to make absolutely certain that arsenical pigments were not present. On this occasion, fortunately Morris & Co.’s disclaimer was correct, but as Susan demonstrates in the BBC Four documentary, sometimes (and always using strict safety measures) carrying out treatment of degraded arsenic green pigments on wallpaper is a necessity. 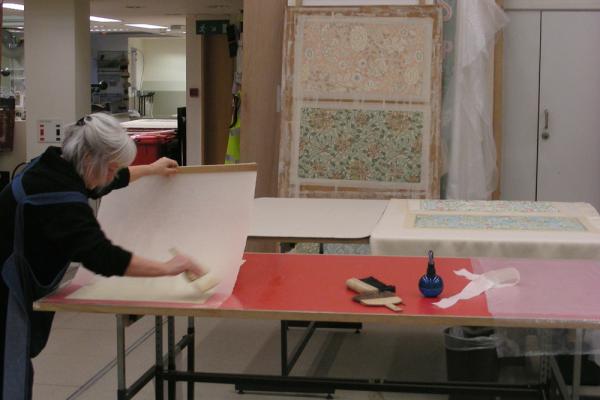 Sorry to see the V&A repeating the untruth that Morris’s wallpapers ever harmed anyone. See: William Morris and arsenic – guilty, or not proven?’, William Morris Society Newsletter, Spring 2011, pp 10-17. Online at http://www.williammorrissociety.org/newsletter_arsenic.shtml;

Hi Patrick, Thanks for your comment. Perhaps I didn’t stress this point as clearly as I could have in the post, but I don’t state anywhere that Morris’s wallpapers harmed anyone. I merely drew attention to the fact that arsenic greens are frequently found in 19thc wallpapers, and that there was a public concern then as there is today. The fact that Morris & co. stated on their pattern book that their wallpapers were free of arsenic shows that they were aware of this concern at the time. As I point out, the V&A have carried out extensive analysis on our Morris wallpapers, and categorically found that arsenic was not present (in the pattern book at least). However, it should be pointed out that ‘Free from Arsenic” and statements like it have, in the past been proved wrong by scientific analysis. For conservators, who are working in close contact with these materials, there is a risk, albeit small, and therefore we are required to prove categorically that such material is not present.