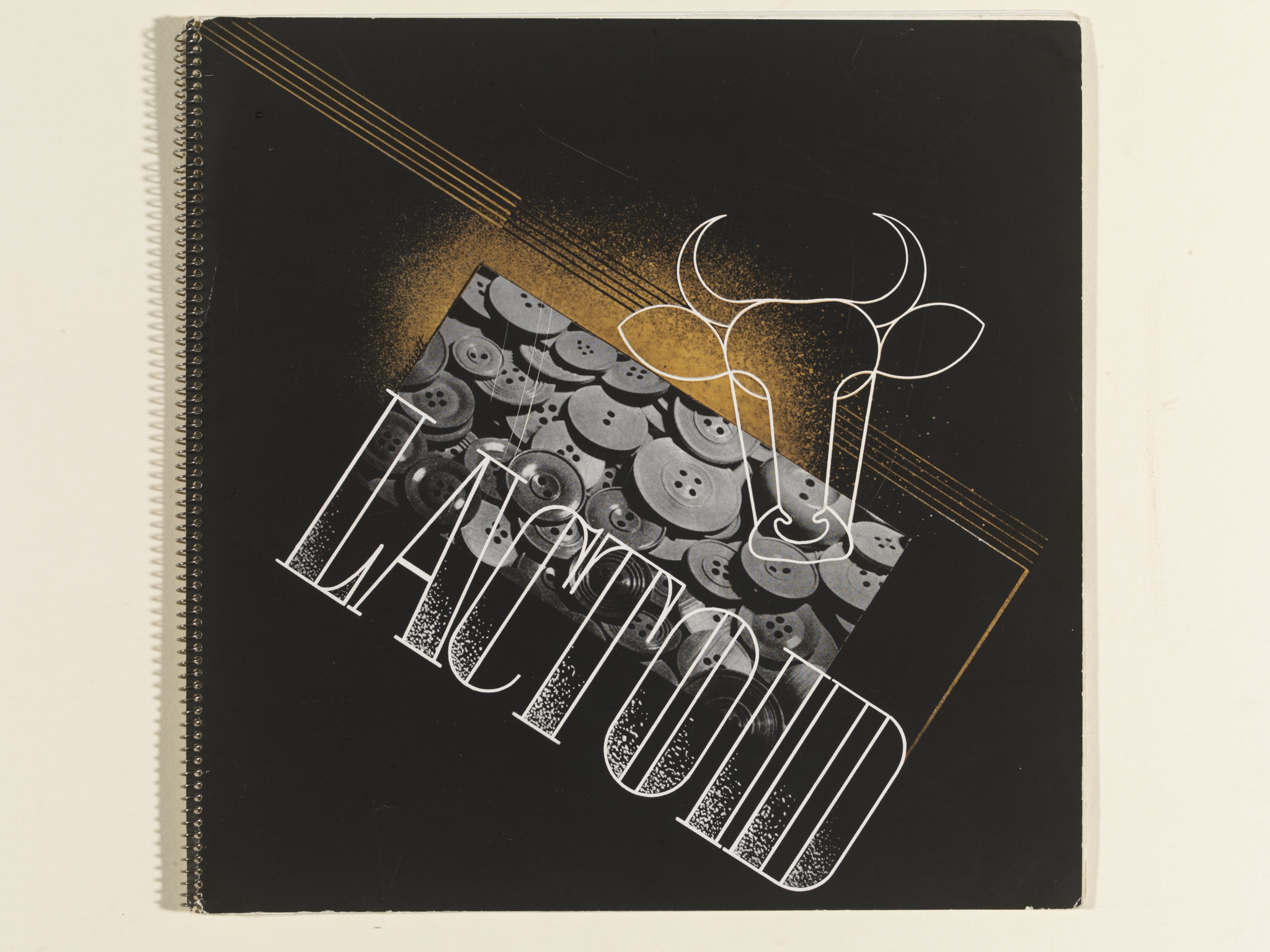 When, and why, was plastic made out of milk? And did a cat invent it? This strikingly designed booklet from the National Art Library’s Jobbing Printing collection of commercial art ephemera reveals all about the peculiar material that is casein, also known as Lactoid.

The name Lactoid hints at the milky origins of the material, as does the image of a cow. The photograph of buttons shows a common end product. Lactoid was a brand name for casein, a plastic produced from milk that was a popular in the 1930s, the decade in which plastic exploded on to the consumer market.

Plastic may seem like a very modern material, but it is over 150 years old. Alexander Parkes patented ‘Parkesene’, recognised as the first plastic, in the 1860s. The search for more new materials led to the invention of casein a few decades later.

The origins of Casein

A widely reported story about the origins of casein tells of a chemist leaving a bowl of milk for his cat on the floor of the lab. The milk went sour so the cat did not drink it and (perhaps as a protest at this poor quality cuisine) the cat managed to knock a nearby bottle of formaldehyde into the milk. In an ‘elves and shoemaker’ ending, the chemist discovers the milk-formaldehyde mixture has formed into a solid block and this new material makes him rich and famous.

Of course, this is not the real origin of casein. It was invented by Adolph Spitteler, a Bavarian chemist (who was not a cat) , in 1897. He aimed to make a white material that could be used as an alternative to blackboards. His new product was made of milk curds, rennet and formaldehyde. It did not replace blackboards but in time it was found to be very versatile: it could be moulded into shape and easily dyed.

Although plastic was invented in the 19th century, it was decades later, in the 1920s and 1930s, that the ‘new age of plastic’ flourished. British manufacturers such as the British Xylonite company in east London were the market leaders in the early 20th century. This page from the booklet describes the manufacturing process for Lactoid, and also features a photograph of their factory in Hale End, East London, where it was made.

The British Xylonite company were at the forefront of manufacturing new plastic products for consumers eager for the latest desirable goods. Lactoid was used as an alternative to natural material such as ivory, horn, tortoiseshell or amber. These natural materials were expensive, and hard to source. Casein was a welcome replacement for making buttons, combs and boxes. It meant that these luxury goods could be available to a wider section of society, not just the wealthy. This page from the Lactoid booklet has an A–Z of its uses and includes knife handles, piano keys as well as more practical electrical gear such as lamp plugs.

Lactoid fell out of fashion and was replaced by newer forms of synthetic plastic (Perspex, Nylon, PVC, polystyrene, polyethylene, Teflon among others) but casein is now being revisited as a potentially more sustainable source for producing packaging.

The booklet for Lactoid was produced by progressive printers Lund Humphries, and designer Maurice V Bennett,  for the British Xylonite Company.  It is intentionally modern in its design throughout. The cover photocollage of buttons and cow; the simple but strong asymmetric typographic title; the photographs of factories; the spiral binding and the bright colours used in the composite A–Z image are all cutting-edge modern elements of commercial design in this period.

If you want to know more about early plastic, and the role of the British Xylonite Company in this industry, then visit the Bow Arts at the Nunnery Gallery in east London where this booklet and other objects from the V&A will be on display until the 25 August 2019.