If there was one thing that that William Kent was good at, it was gold. Actually he was good at many things, but he approached gilding with a taste or ‘gusto’ that, quite literally, dazzled his contemporaries. Kent’s love of gold can be traced back to the years he spent in Italy as a young man. Along with his friend the antiquary John Talman, and his future patrons Lord Burlington and Thomas Coke, Kent was at the centre of an eighteenth century bling ring, a group of young Englishmen abroad who wanted to reproduce the aesthetic excess of Italian decoration in the English domestic interior. Kent spent five years in Rome studying painting, and during this time presumably visited the Domus Area, the Golden House of Emperor Nero that had been re-discovered during the Renaissance and inspired generations of artists afterwards.

Kent’s work in England always shows the opulent influence of these Italian years, and the exhibition will include some shining examples of his gilded furniture. This console table, originally created for Burlington’s villa at Chiswick, is made from giltwood and topped with Sienna marble in the Italian style: 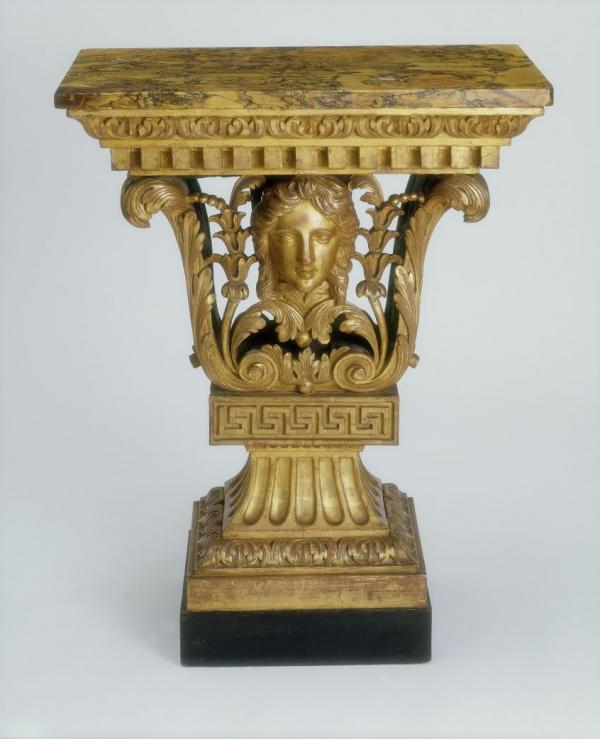 Other successful gilded commissions include this mirror for Frederick, Prince of Wales, probably designed by Kent and carved by John Boson, who also executed Kent’s designs at Chiswick House:

A giltwood mirror designed for Frederick, Prince of Wales. The mirror is typical of the symmetrical Baroque style favoured by adherents of Palladianism such as Kent, but also includes hints of a Rococo influence. Museum no. W.86-1911 © Victoria and Albert Musuem, London

This is not to say that gold decoration was to everyone’s taste. For example, Kent’s redecoration of Raynham Hall, Norfolk (1725-32) inspired Lord Oxford to write: “The rooms are fitted up by Mr Kent and consequently there is a great deal of gilding…” Unfortunately this was not meant as a compliment. More savage were the comments of George Vertue, the antiquary, engraver and general gossip whose notebooks provide a very good source of information about the art and design of the period. Vertue described Kent’s work on the Cupola Room at Kensington Palace as containing “Niches of Marble and pedestals with statues, guilt [sic] with burnish’d gold which makes a terrible glaring show…” Again, the description only goes downhill from here. 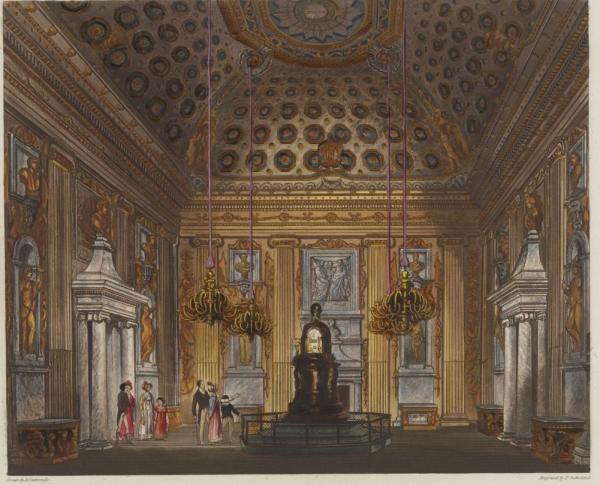 Bling for a King: The Cupola Room, Kensington Palace, after a watercolour by Richard Cattermole, 1816. The offending gold busts that Kent designed almost a hundred years previously can still be seen all around the edge of the room. Musuem no. E.91-2013© Victoria and Albert Musuem, London

However despite Vertue’s vitriol, Kent’s work at Kensington Palace was his big break. Starting in 1722 he designed and painted several rooms for George I’s newly-renovated palace, and it was this Royal Commission that thrust him permanently into the public eye, even if at times he caused it to squint.