I probably shouldn’t admit to this, but the curators of William Kent have a lot of extra help when it comes to getting the exhibition up and running. These helpers are industrious, elusive, and a little bit shy (you won’t see their names in the exhibition’s credits) and have such a lightness of touch that once everything’s finished it almost seems like they were never there at all. But as I’m writing this, even though I can’t see them, I know they’re flitting around making sure everything is going to plan. I can’t talk too much about what they do in case I scare them away, but treading softly around the exhibition I managed to catch a glimpse. Behold, the Exhibition Fairies: 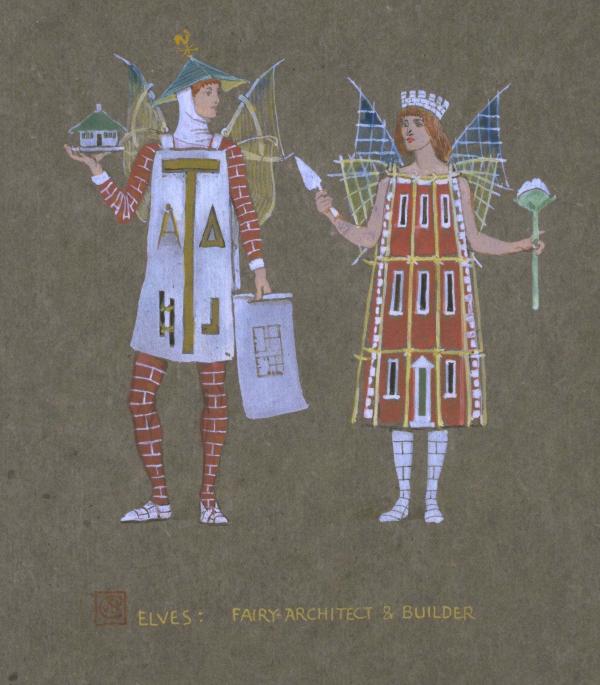 The Exhibition Fairies use their special powers to give the objects wings, magicing them across the Ocean to South Kensington. Their precious cargo is flown in carefully organised batches to ensure that the right objects arrive in the order in which they’re going to be installed, preventing a great freight traffic jam. They then use their special powers of intuition to work out which objects are where, even though to the naked eye it just looks like a mass of sealed crates: 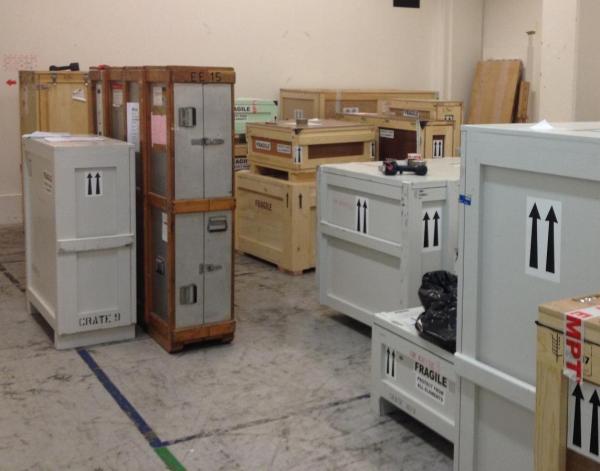 Late into the evening, the Exhibition Fairies work on their Scroll of Events  (you may not know this, but fairies are whizzes with Excel) so that each day the installation team of curators, technicians, security guards, conservators, designers and couriers know exactly where they’re supposed to be and when, what objects they should expect, and how and when they will be installed. The Exhibition Fairies know the secrets of all the objects– dimensions, weights, loan conditions, environmental controls, hanging mechanisms, label placements, packing requirements and courier details– just some of the information that is essential for the technicians, contractors, lighting engineers and security guards to do their jobs.

Every day the Scroll of Events (otherwise known as the Exhibition Schedule) is updated, and today I was especially interested to note the arrival of the show’s shiniest object, a magnificent silver chandelier. The chandelier (one of a set of five) was originally designed by William Kent for King George II’s court at Hanover in 1736-37. Today one chandelier is in the collection of the MFA in Boston, and another in the care of the National Trust at Anglesey Abbey. The latter arrived this morning, accompanied by a courier from the National Trust and a metalwork conservator, who meticulously checked the chandelier to ensure it hadn’t sustained any damage on its journey from Cambridgeshire: 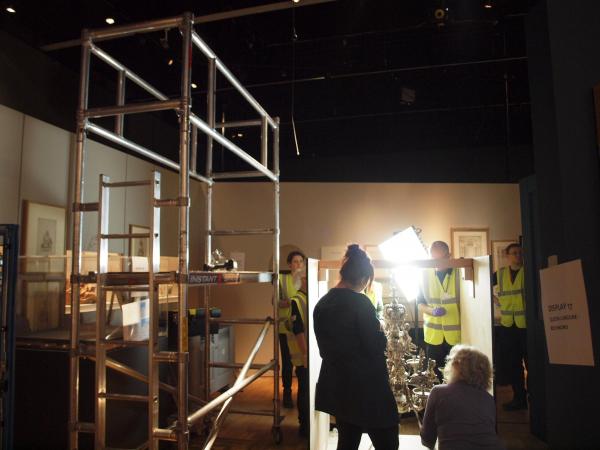 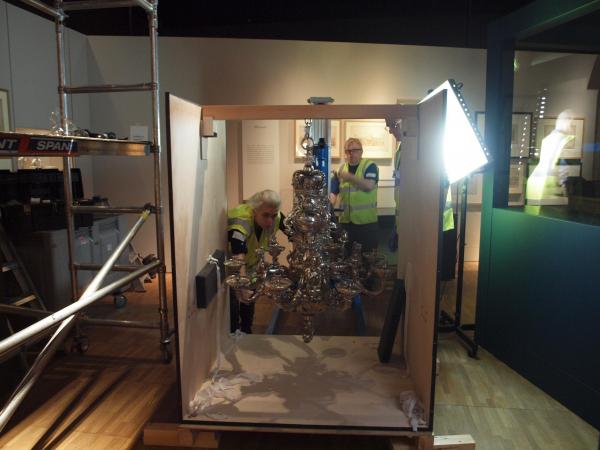 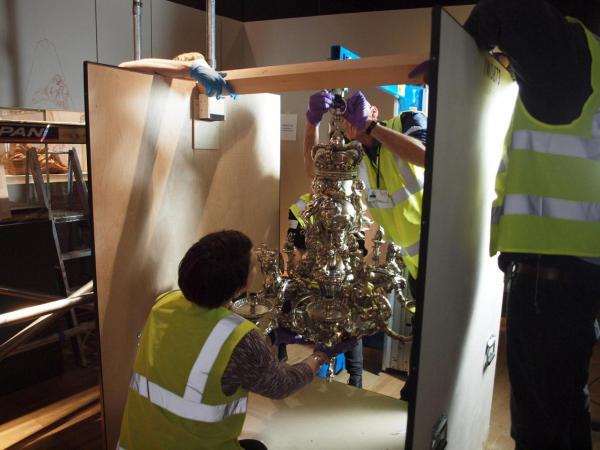 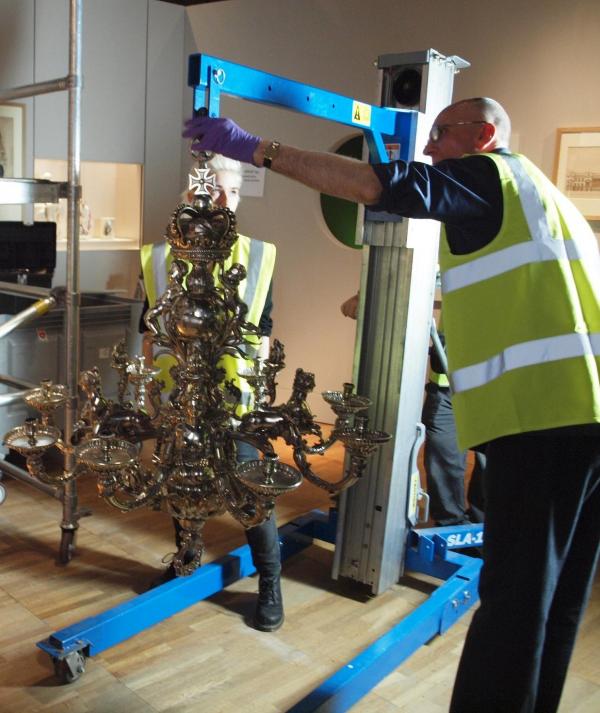 At this point the exhibition designer gets involved, since it’s up to him to decide at exactly what height the chandelier should hang. This is ideally low enough for everyone to see the ornate metalwork and regal iconography, and high enough to prevent tall visitors from accidentally knocking themselves out while rushing to get a good look at the nearby model for a royal palace. 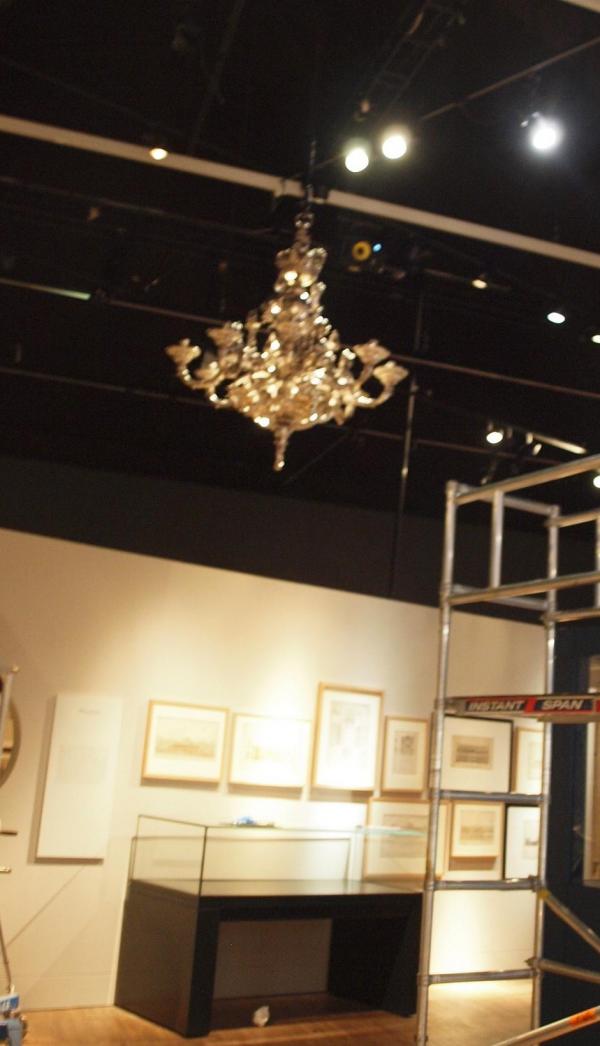 The chandelier safely installed, the Exhibition Fairies get to work on the next hundred or so objects. And then, as quickly as they arrived, they’ve vanished. Or have they…? 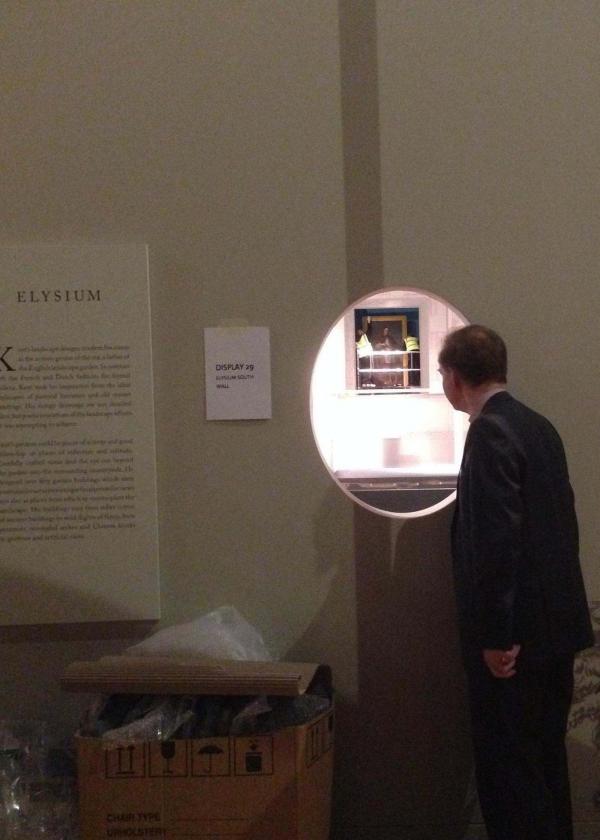 Jumping on the Bandwagon

If any proof were needed about the evocative power of music then I’d be hard pressed to think of a better example than Handel’s Zadok the Priest. Is it possible to...