Last weekend I took something of a busman’s holiday and trundled along the District line to Chiswick House. Chiswick brings together two important figures in William Kent’s life: Lord Burlington, Kent’s long-time patron and friend; and Andrea Palladio, the sixteenth-century Venetian architect. As I mentioned last time, Burlington and Kent met in Italy, where they had seen examples of Palladio’s buildings first-hand, and where Burlington had brought several volumes of Palladio’s work. Upon his return to England, Burlington set about building his very own Palladian villa, which was attached to his ancestral home in Chiswick. Kent tagged along too, writing in 1719 “I got safe here with my Ld. Burlington and am log’d in his house…” He was clearly one of those guests who just won’t leave– he was a frequent visitor to Chiswick on-and-off until his death in 1748, and was buried in the Burlington family vault in Chiswick Church. Yet Kent earned his keep in spectacular style, decorating and furnishing the interiors and designing the gardens that can still be enjoyed today. 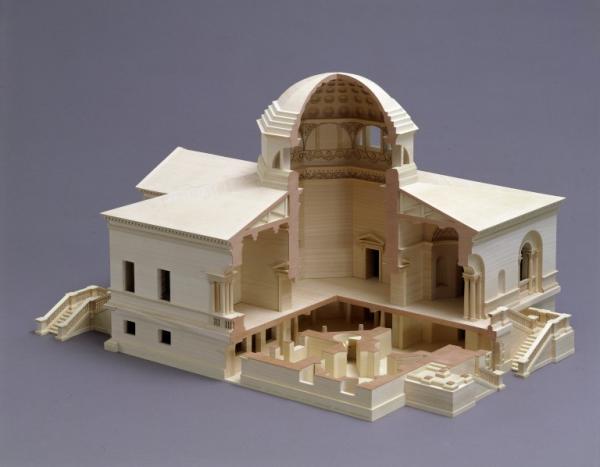 There are two things that one notices straight away upon entering Chiswick House. Firstly, it’s cold. Even with the English weather on best behaviour the house seemed very chilly when coming inside from the sunshine. Secondly, it initially feels very small in comparison with many other important houses from this period, and as the model above shows, the downstairs has low ceilings and labyrinth corridors rather than the usual grand reception areas.

These facts were not lost on Kent’s contemporaries, as this satirical doggerel (which is, incidentally, by no means the only abusive poem about Kent’s projects!) makes clear:

Possess’d of one great Hall for state

Without one room to sleep or eat

And all mankind how ill you dwell

The reason for Chiswick’s structure was that it was never intended as a house in the complete sense of the word, but a villa in the Palladian tradition. The downstairs areas acted as Burlington’s study and would have been filled with books. The upstairs rooms were intended to showcase  his art collection and provide a view across the spectacular gardens. 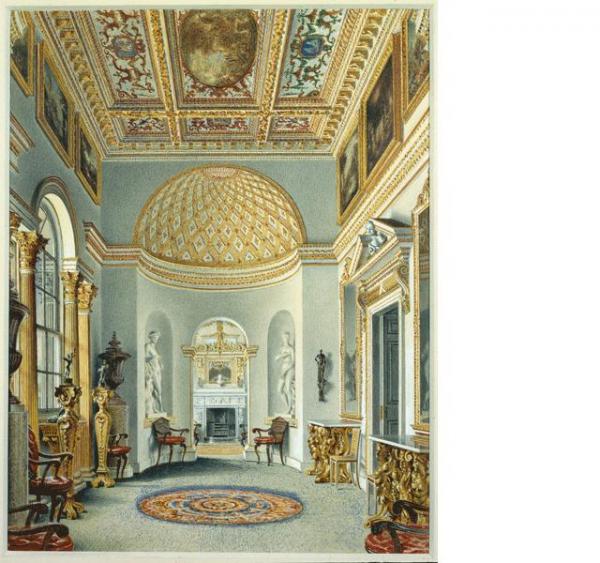 Some objects were pieces Burlington had acquired in Italy, such as the two console tables you can see in the right of this image. The marble slabs (which were often the most valuable parts of furniture) were imported from Italy, and Burlington commissioned an Italian carver to make the frames. The same tables are still on display in Chiswick House, and we’re borrowing one for the exhibition at the V&A.

As you can see, Burlington and Kent intended the villa at Chiswick to replicate a  little piece of Italian glamour in west London, a fun contrast to the old Jacobean house next door that was the Burlington ancestral home. The upper rooms, used for entertaining, created the impression of walking into a particularly lavish jewellery casket, with velvet walls and ornate ceilings, and the idea of Chiswick as something of a treasure box can still be felt today. This “Palladian” jewel box is by the ceramicist Sona Kalindjian and is made from earthenware with a mother-of-pearl lustre glaze. 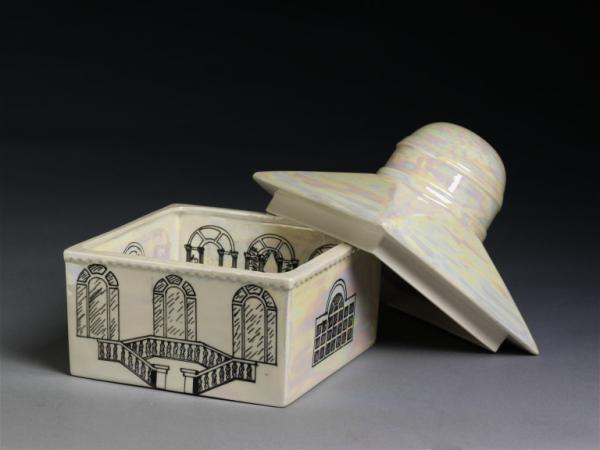