For the month of May, the community research project Brickfield Newham set up a brickworks on a construction site in the Royal Docks as part of Newham Heritage Month. Communities from across the borough came together to make bricks from local industrial waste materials and make performances from local histories of housing and brickmaking.

This photo essay shares some moments from the exciting month of activities.

Brickfields were everywhere in nineteenth-century East London as the demand for homes to house its rapidly growing population created a demand for construction materials. Often whole families worked the brickfields, living in wooden shacks on the site. The Victorian bricks we walk past every day are pieces of their labour.

The first step in setting up our itinerant brickfield was to find a source of clay. Our yellow clay came from excavation works for the foundations of a new housing project and community hub in Plaistow. Our black clay came from a housing project in the Royal Docks. Dug straight from the ground, the clay took many stages to process until it was ready for brickmaking. Here ceramics students from CityLit helped to break down the clay.

Rosanna Martin, founder of Cornwall’s Brickfield, brought her expertise in brickmaking to East London. Here Rosanna is showing a series of test tiles to workshop participants, demonstrating how the addition of calcium carbonate – a waste by-product from Tate & Lyle’s sugar whitening process – changes the colour and strength of clay.

The distinctive look of our bricks was shaped by the frog which fitted inside the brickmould and was based on the iconic shape of the London Brick, which you can see depicted on Jonathan Ellery’s poster in V&A’s collection.

Many volunteers came to help us make bricks. Here a volunteer from Cody Dock’s brick restoration team is shaping a ‘clat’ of clay.

The clat is then thrown into a brick mould. Which takes a lot of force and accuracy.

Some brickmakers then decorated their bricks.

Workshop participants also watched a new theatre performance crafted by BA Drama, Applied Theatre and Performance students from the University of East London about housing in the borough, telling the story of a squatted house backwards to its creation out of clay. The audience watched the performance through binoculars and heard housing testimonies through headphones.

Royal Docks Activity and Learning Centre’s afterschool club joined us for a special brickmaking workshop, led by Brickfield support artists Zenna Tagney and Bobi MacFadzean. Eleven out of the fifteen participants left saying they wanted to be brickmakers when they grew up!

We took delivery of clay from W H Colliers famous Essex clay pit and sand from the Thames Estuary brought to us on the Thames Barge Blue Mermaid: re-enacting the transport of materials along the River Thames and showing us how building materials can be moved around pre- and post-fossil fuels.

We also hosted a very special week for a group of individuals passionate about brick, ceramics and housing activism in collaboration with Newham Council’s Youth Empowerment Team. The Brickfield Makers exchanged their knowledge and lived experiences. As part of the busy week we decorated briquettes in the John Madejski Gardens inspired by architectural terracotta at the V&A.

The Brickfield Makers had an architectural tour of Stratford led by local historian Mark Gorman and former housing officer Peter Williams, where we took clay impressions of buildings as we explored.

The brick kiln was constructed by The Brickfield Makers. Menisha, pictured here, scoved the kiln to insulate it with black clay dug from the Royal Docks.

Once the kiln was finished, Joel from The Brickfield Makers lit it.

Volunteers fired the kiln with wood continuously for 27 hours, restoking around every 7 minutes to ensure we reached at least 1000 degrees.

As the kiln fired bricks made by the local community, UEL MA Performing Arts students shared their newly devised performances about histories of brick and housing in Newham. Charlotte Marsden, pictured here, explains the eviction process.

The bricks fired to a beautiful range of colours, some bearing ‘kiss-marks’ from the kiln and others the markings of where the drying bricks were rained on.

Mayor of Newham Rokhsana Fiaz has been presented with a Brickfield Newham brick at the construction site of Populo Living’s Plaistow Community Hub, which is the site where the yellow clay that made our bricks was excavated from by building contractor Vistry Partnerships.

We are now working with the communities we worked with to figure out what to do with the fired bricks!

Brickfield Newham is one project conceived by Public Engagement Fellow Georgia Haseldine, in close collaboration with Rosanna Martin (Brickfield) and Lynne McCarthy (UEL), as part of the V&A’s The Question of Clay research project, co-led with renowned Chicago-based artist and VARI Emeritus Fellow, Theaster Gates. The Question of Clay explores the history, significance and meaning of clay and ceramics, and innovative ways of opening up the V&A’s collections to new audiences.

I, m entranced with the fun, play and complexity of a substance that is generally ignored that you have managed to convey in this project.
Well done to all involved. I will be interested to see what becomes of the bricks.
The history of brick making seems to be under appreciated. I was in awe of seeing the Colloseum in Rome and realising it was built from bricks, faced with stone.
The quantities of wood needed to fire them all doesn’t bear thinking about.

It was an honour to be a part of this project.

Piecing together the old and new 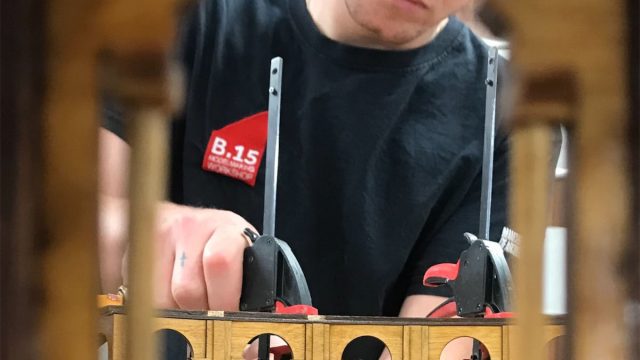