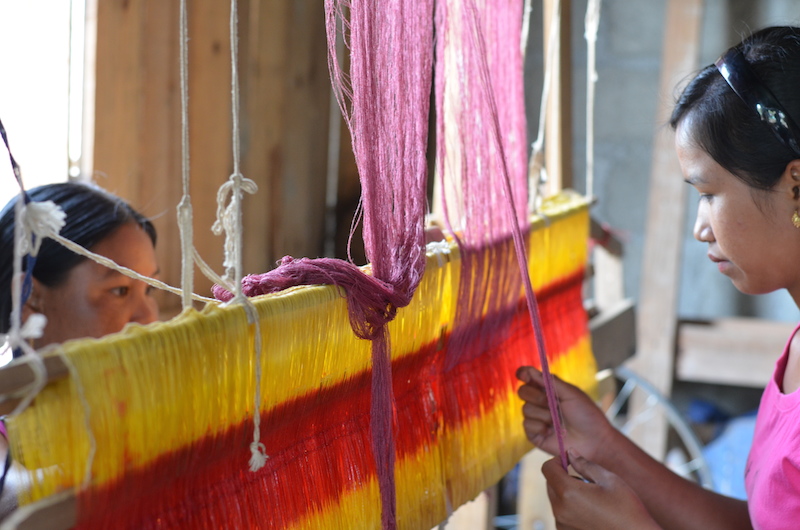 This week we welcome Amrita Ravimohan, a representative of the of Indigenous Terra Madre 2015 event. She brings us fascinating details about eri silk weaving and kheng embroidery in Meghalaya, accompanied by some sumptuous images!

North East Slow Food & Agrobiodiversity Society (NESFAS) Shillong has been working closely with weavers with the support of Craft Preservation consultants to produce high quality silk products that will be showcased during the Indigenous Terra Madre 2015 (or as it locally known as – the International Mei-Ramew). This event, held in Meghalaya, India between 3rd & 7th November 2015, will celebrate the wonderful cultural and biological diversity of indigenous communities as primarily expressed through food, but also their songs, dance and dress that have evolved through generations of close interaction with nature. NESFAS, one of the organizers of the ITM 2015, in collaboration with the Department of Sericulture and Weaving, Meghalaya and GIZ will host at the event, a vibrant multi-faceted exhibition of unique fibres and fabrics of eri silk from Meghalaya.

Meghalaya has a rich variety of hand-woven textiles, with unique characteristics that reflect the state and its skilled artisans. The state produces three varieties of silk – Eri (locally known as ryndia from the castor plants the silkworms feed on), Muga and Mulberry. The Ri-Bhoi District is one of the main regions of Meghalaya where eri-culture and handloom weaving is still practiced. All the materials involved in the process are sourced from the district itself.

The creative process is completely organic, and ryndia is also called as “ahimsa” (non-violent) silk: extracted from cocoons without killing the larvae inside. Eri-culture and weaving are also important activities for generating supplementary income and providing a much needed opportunity for women to contribute further to the family, especially for the elderly and the young mothers who are not able to go out to the fields. Unlike other parts of India, where much of the spinning and weaving is in the hands of men, in Meghalaya it is the exclusivity of women and their families. This traditional knowledge is passed down through generations. Kong Kwickstar Tmung, from Diwon says “My mother is a natural dyer and weaver. I learned everything from her and through my hard work and dedication I have become better and better every day. I also teach others who want to learn the skills so that they can also earn a living.”

The eri silk artisans are also involved in agriculture & use their spare time for eri related activities. However, they are  understand that keeping these fading traditions alive is an important investment for the future – an activity which through continuous practice they can keep doing long after they have lost their strength to contribute on the fields. For instance, Kong Loin Nongpoh, from Umtnang says: “I am a very old lady living a simple life. I rear, I spin, and I weave eri silk, but now because I am old I only rear and spin to provide for my two disabled sons and my four grandchildren. I am poor, but I have enough food for a day. Eri silk is a blessing from our heavenly fathers.”

Silk weaving in the North East region is traditionally done on floor looms although now frame looms are also used due to the possibility of increased production. The traditional floor loom is completely made of bamboo, including the reed used to beat the cloth during weaving.

The loom and its components are hand-made by the village women themselves. The heddles are made from string, tied on manually every time a new warp is put on the loom. The floor loom produces one scarf per warp, whereas the frame loom offers possibilities of increased production.

Intrinsically linked to eri is Khneng embroidery, practiced uniquely in Mustoh & the Shella region of Meghalaya. The embroidery is traditionally done on a handspun and handwoven eri silk shawl, creating the pattern by counting the warp threads. The traditional clothing of Shella is the shawl (jainkup) and wrap round (jainpein), a red and yellow square check fabric, embellished with geometric patterns in black acrylic wool. The embroiderers are nowadays being encouraged to experiment with different natural threads such as cotton and eri silk. Up until early 2015, there were only three women practicing the craft of Khneng embroidery. Recently, through training programmes, nine women have begun to learn the technique.

This embroidery technique is an expression of local cultural identity, and an important physical illustration of historic trading routes in the state of Meghalaya. The eri base cloth has traditionally been woven in Ri-Bhoi and sold to embroiderers in Mustoh through traders moving between the two districts. Interestingly, there are a number of woven eri shawl designs that are also typical of the traditional dress of Shella, though woven in the Ri-Bhoi district. The most characteristic facet of the embroidery is the graphic (almost contemporary) nature of the design, which is very different from the usual flora and fauna based motifs of Indian embroidery.

Though Khneng embroidery requires urgent support to prevent the knowledge of the craft from being lost, eri silk is slowly coming into the mainstream thanks to the efforts of some local fashion designers from the North East, who have taken it upon themselves to contemporize the use of the fabric for a broader market.

The author is part of the Communications Team for Indigenous Terra Madre 2015 and can be reached at amritar0208@gmail.com.

And the first fabric of this wonderful silk is now available at the online shop of SEIDENTRAUM. We offer a wide range of Organic Silk, Peace Silk and in future more and more textiles from Meghalaya Peace Silk.

Have a look at http://www.seidentraum.eu – thank you!

Thank you for this interesting article. We just finished an exhibition with Google Arts and Culture and on the same topic. https://www.google.com/culturalinstitute/beta/exhibit/CQJCTbBRTrDzLA we would love to discuss it further.

such really greatfull work. keep up this work n more grow with earn money help there is local people.abt me i am doing work in natural dyes.and dyeing
thanks
Deepak kumar agarwal