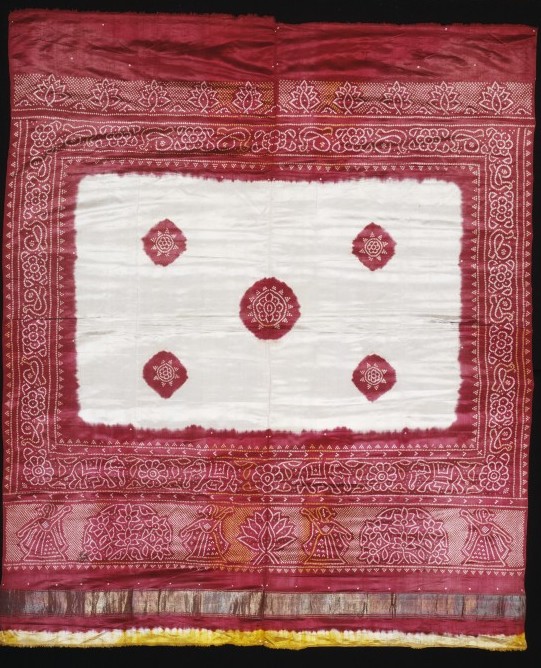 When the idea for an exhibition on Indian textiles was first given the go-ahead, I had some sleepless nights wondering how we could possibly fill even one of the V&A’s massive exhibition halls. I needn’t have worried. Now I have sleepless nights about how much we can reasonably  fit in… From an initial selection of nearly 300 objects, we have now managed to reduce the list to a more reasonable 200, which we have now plotted into the display spaces.

The severe pruning of the initial list was a painful but necessary process, determined by several different factors. Most under threat from the outset were pieces that told the same story as others, so instead of illustrating Rabari embroidery from Gujarat, for example, with three different (all beautiful) pieces, two had to go.

The last one (IS 7-2008) was the one that made the cut, partly because we like to include garments as well as flat textiles and partly because the embroidery is really strong.

Some pieces turned out to be simply too big to fit in to the scheme of the exhibition. The magnificent Central Indian ‘Paithani’ shawl (below) was not just huge in its own right, but the weight of its gold borders compared to its fragile cotton centre meant that it couldn’t be hung but would have to be supported on a large triangular frame. As well as removing any sense of the elegantly draped textile it would have been in use, the mount would have taken up a whole display case on its own, so, reluctantly, we had to take it off the list.

All the initially selected pieces were assessed by our conservators to find out how much time would be needed to make them all fit for display. Things that I had blithely thought had ‘just a few holes’ turned out to require hundreds of hours of work, so unless the piece was really crucial, a significant number dropped out at this stage. Fortunately we could replace many of these with alternatives in better condition.

This lovely silk bandhani head-cover or orhni had splits in the silk that would have taken a long time to repair, so an equally beautiful piece in the same technique will take its place.

But for some things there was just no substitute. I had been hoping that this would be the moment when an extraordinary silk hanging from Manipur, in the far North-East of India, would make its debut on the world stage. Acquired in 1905, it has not, as far as I could find out, ever been shown (and I have to admit it’s not in the best condition), nor have I been able to find another comparable piece in any collection. Even colleagues in Manipur and Assam said they had never seen another one, and yet its distinctive silk tapestry-weave technique and design confirms that it is from that area.

The assessment for this one piece alone was for more than three solid months’ work – and with 199 other objects all competing for conservation attention, it wasn’t possible to devote so much time to one piece. So it has sadly been carefully rolled up  and gone back into storage, still waiting for its day in the sun…

Will there be a symposium associated with the exhibition?

Yes Michele, we are planning a conference but don’t yet have confirmed dates or speakers… so watch this space…

Please add a “subscribe by email” function to this wonderful blog. Thank you.

Hi MD Smith. Thanks for reading the blog. We’re really glad you enjoy it. I’m afraid that we don’t have a subscribe by email function, however, we are compatible with blog readers such as Feedly or Flipbook.
Lizzy, V&A Digital Media team.

M. Hardy asked on Nov 5, 2014 if there would be a symposium associated with the Indian Textile exhibition. It is now the end of January, so is there any further information about such a program. Dates, speakers and topics?? For anyone coming from the States, this information is helpful 3 to 6 months in advance, for planning and scheduling textile and costume events into one’s personal and family calendar.