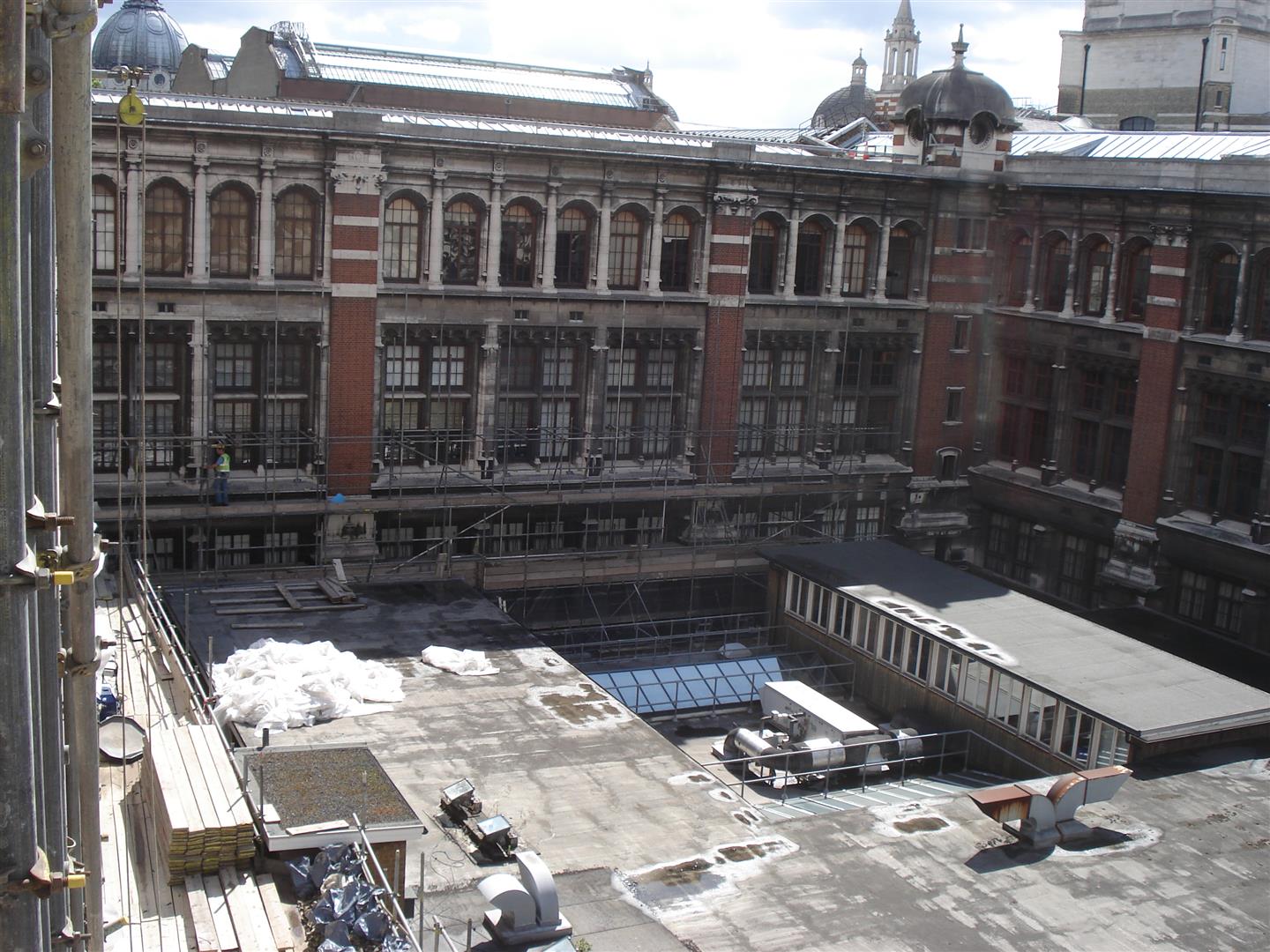 Turning the Exhibition Road Building Project designs into reality is an enormous and constant challenge for the design team – in particular the engineers and contractors.

Working closely with architects AL_A, a team of Arup structural, building services, and geotechnical engineers, and other specialist consultants has collectively spent more than 25000 hours (so far) on the design of the V&A Exhibition Road Building. They are now monitoring how that is turned into reality.

Alice Blair, a Senior Engineer at ARUP tells us more about her experience working on the Exhibition Road Building Project, and the current progress on site.

I’ve been in the Arup team for more than four years. One of my first tasks as a structural engineer on the project was a visit up the scaffolding which had been put up around the façade of the Henry Cole Wing, one of the four existing Grade 1 listed buildings which form the perimeter of the site. At the time, the façade was being cleaned of the soot and grime that had built up over decades.

From high up on this scaffold, looking outwards (and downwards) we had a great view of the whole of the Boilerhouse Yard, the site of the new building. But right next to us was the delicate Sgraffito plasterwork, an impressive but very fragile decorative finish on the outside of the Henry Cole Wing.

In that moment, the key challenge put to the structural and geotechnical engineers became clear: how do you create as much new gallery space as you can, underground, in a site right next to beautiful and historic buildings, without causing unacceptable damage? In addition the Museum needs the gallery to be column-free; the architectural aspiration is to bring as much daylight as feasible into the gallery, and there is a five metre difference in ground level from one side of the site to another.

This is a basement project, but it’s quite unlike any other.

On site, the construction is currently in an exciting phase, as the activities that are happening mean that the site’s appearance is changing rapidly. We can start to see the items we designed: the secant piles (interlocking columns of concrete that form the basement wall) are being exposed as the soil next to them is excavated and removed from site.

Much work was done in the early design phases to work out how close the basement wall could be built next to the existing buildings, taking into account the shape of the building’s facades and their foundations, the possible types of basement wall construction and the space required by the equipment needed to build it. Pleasingly, the wall was built as planned in design with no adjustments needed – meaning we could achieve the full gallery floor area of over 1,000 square metres. 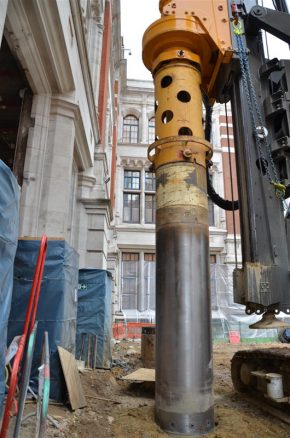 Excavation within the perimeter basement walls is now happening apace. Thousands of cubic meters of soil have already been removed from the site. We’re now so deep down below ground level that the London clay currently being excavated was deposited 50 million years ago, at a time when South Kensington would have looked like a mangrove swamp.

Below the Western Range building, construction has already reached its deepest level. There is an impressive temporary frame supporting three storeys of heavy façade and floors, crisscrossed by props to the basement walls. Soon, two sets of steel columns will be inserted and pick up the transfer beams overhead, a structure that visitors will see for themselves as they walk down the stairs to the gallery.

The gallery floor slab is now being constructed, eight metres below ground. This will be built with two ‘moling holes’ so that small excavators can work underneath the slab to dig out another six metres and create another whole storey below, which will eventually provide space for art handling and preparation for the V&A’s headline exhibitions.

Meanwhile, whilst all of this is happening onsite, some complex steel trusses are being fabricated a few hundred miles away, for the next exciting phase of the project….