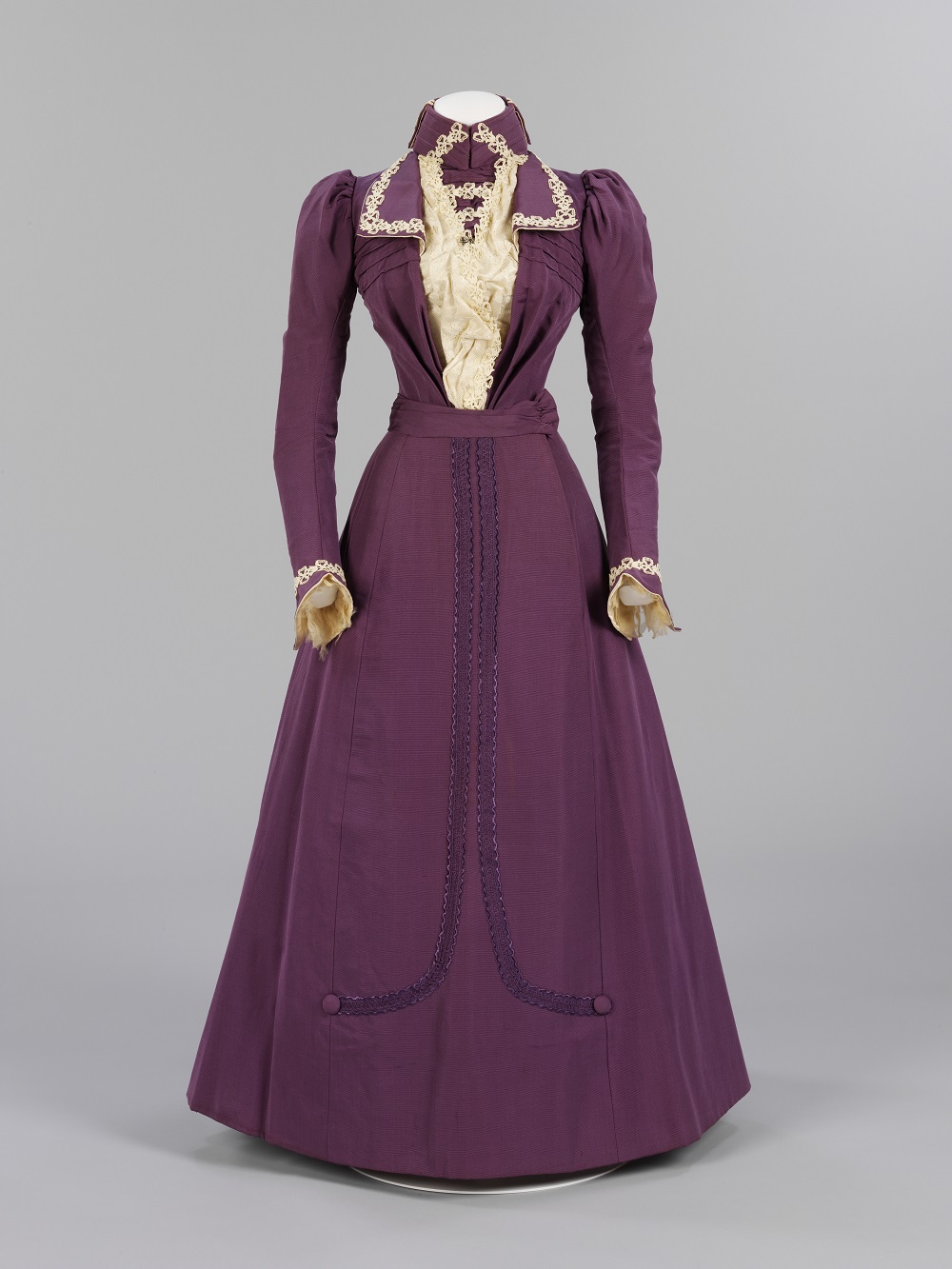 This blog post focuses on your questions about breaks from tradition in the exhibition and my own personal response to them:

Susanna: Through history, and so throughout our exhibition, examples exist of women wearing what are now seen as dresses which go against the, as you say, homogenised view of wedding dresses. Rather than women always wearing a wide skirted white dress with a veil, our displays showed how much styles changed, and how individualised styles often were.

I think we are now seeing a return to that variety and individualistic approach. In terms of modern examples, I think that rather than appearing their richest or purest as the cultural coding of wedding dresses used to imply, contemporary brides aspire to be the best version of themselves on their wedding day. So, in some cases that might be a fairy tale vision, or it might be an ethereal, other worldly invention – or it might even just be a dress you already have that you know you feel fantastic in (…if you’re Keira Knightley). I think that Lady Oxmantown and Katie Shillingford both stand out as examples of brides in our exhibition who created dresses idiosyncratically suited to their own style and personalities.

J Newsom: Over your time getting to know the ins and outs of the exhibition, what have been the most enlightening facts you’ve learnt about the history of wedding fashion, and how do you feel it relates directly to the matrimonial process?

Susanna: I think I have been most interested to learn are the practical inclusions and innovations in bridal design. As well as being beautiful, these dresses are built to suit the traditions, activities and even venues of a wedding day. In particular, the dresses seem often to have been designed with making a grand entrance in mind.

For instance, Margaret Whigham’s Norman Hartnell dress for her 1933 wedding to Charles Sweeney, the 18 foot train of the dress was designed specifically for the long and wide aisle of Brompton Oratory (T.836-1974).
Sarah Boddicott, a rich merchant’s daughter, married her second cousin Samuel Tyssen at St John’s Church in Hackney on 28 September 1779. Her dress, made of a silk woven in Spitalfields, was trimmed in silver fringe and sequins, which would have glittered as she moved (T.80-1948).

Comparatively, Katie Shillingford’s veil by Stephen Jones for her wedding in 2011 had a detachable section at the front. Charmingly, this meant that she could lift it away and reveal her lips when the time came for ‘you may now kiss the bride’.
I have also loved discovering the secret lucky tokens so many of the brides have included in the designs of or sewn into their dresses. I’ve explored these in a previous blog post, so I won’t go into much detail, but there is something very evocative about lifting a hem and finding a horse shoe hidden there.

Claudia Santile: Have any of the stories you’ve discovered during your experience with the exhibition influenced how you’d like your ‘perfect day’ to pan out, and if not, then what have you learnt about what is expected from the woman in the 21st century?

Susanna: Honestly, I’ve never been one to picture a wedding day or even to prioritise getting married. However, it has been a real privilege to have the chance to study the history of these customs and to talk to so many people about the sartorial and personal choices they made. Throughout history, but particularly in the cases of the modern brides we have worked with who have a lot more social freedom, I think the most successful wedding days – and dresses to match – seem to be based on a couple simply doing it their way, and only playing to an audience if they want to. I am going to cheat slightly and quote my lovely boss Edwina Ehrman, from an interview she gave on Women’s Hour recently: ‘I would say that today we are very lucky. In western society it is entirely up to us whether we choose to marry or not. And if you choose to marry, do what you want to do. If you want to go down the traditional line and marry in a white dress and a veil, enjoy it. If you want to wear a red dress – fine. A trouser suit – lovely! Just be happy, relaxed and enjoy your wedding day’.