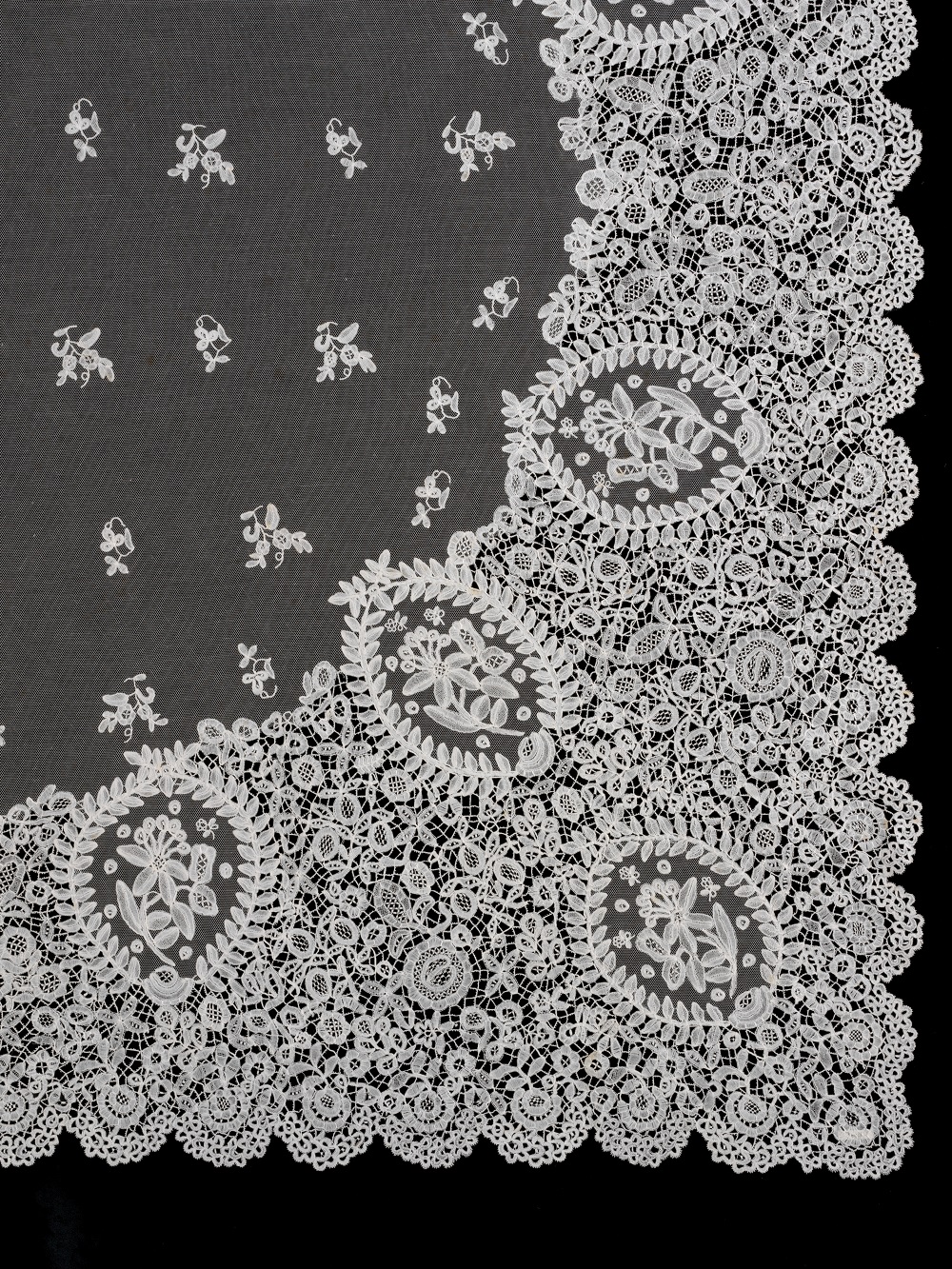 As well as placing the bride in a slight state of mystery for her groom as the ceremony commences, a wedding veil flatters and frames the woman’s face. As in all aspects of wedding wear tradition, a veil must balance style with symbolism.

As the ideal of a well to do young bride in white began to solidify in the mid nineteenth century, the veil and orange blossom wreath were the essential accessories to complete this image. A veil, by delicately covering the face in a demure manner, was a key addition to this growing image of the blushing, pure bride. Before the 19th century, and still often during it, as a veil was a luxury item, a bride would wear a bonnet for her wedding. Once again, this choice would be made with continued wear in mind. A bonnet made a more practical addition to a wardrobe, as well as being a piece which could be altered more easily or customised to suit certain trends.

In its early incarnations, the wedding veil was not worn by the bride alone. In the 1830s, bridesmaids and wedding guests also often wore veils. This trend continued a tradition of bridesmaids wearing matching clothing to the bride which is said to date back to the Roman period. The reasoning for this tradition varies through history but it is repeatedly associated with female partnership and protection. This protection – provided by masking the bride among a strong group of women in matching clothing – was against either evil spirits, or, on the journey from one village to the next the night before a wedding, against possible threat from strangers. The nineteenth century interpretation of the tradition also symbolises the change in worlds a young woman made by marrying. Accompanied to the ceremony by the women who she would have spent the majority of her life alone with, their bond sartorially demonstrated, she would then leave this female sphere to enter a new, marital partnership and community.

Bridal headwear was not confined to the wedding ceremony alone. When Elizabeth Farren married the recently widowed Lord Derby in 1797, she brought with her a rather excessive, and exceedingly expensive, trousseau. As well as thirty muslin dresses, this trousseau included her wedding night cap, it alone costing eighty guineas, equating to £84 at the time. Putting the height of that figure into context, in household budgets in 1796, the annual total wages for a housekeeper, a cook, a housemaid and a lady’s maid would come to around £58.

Leaping forward to the twentieth century, as the influence of Hollywood grew, so too did the veils worn by brides. In the early 1920s, veils combined with wreaths to create a capped section on the head. This style was inspired by the veil worn by Lady Elizabeth Bowes-Lyon at her wedding to Albert, Duke of York – the couple who went on to be the parents of our present Queen. Lady Elizabeth wore a Flanders lace veil, lent to her by Queen Mary, which was framed with a circlet of myrtle decorated in white roses and heather, which reflected her Scottish ancestry. Glittering, almost Egyptian-inspired headdress sections at the front of a veil were considered another fashionable frame for the face. In the late 1920s, long veils were in vogue. During the service, the bride would wear this veil over her face, to then throw it back behind her dramatically as she left in the bridal procession.

The veil remains a stalwart of modern bridal wear. Two of the most notable veils for our contemporary brides are those which were worn by Gwen Stefani and Katie Shillingford. In both cases, the veils are long and have been designed to almost merge and entangle with the skirt and train of the wedding dresses they accompany. These designs imply an extension of the veil’s purpose – no longer just a neat and modest covering for the head and face, a veil is now a key contender in the dramatic imagery of a bride’s big day.

Gwen Stefani brings shades of red into the picture. I once read that originally, in the “mediaeval ages”, wedding dresses for brides were always (ruby) red!

I am getting married in May, this year. I am staying in New South Wales and looking for a one of its kind wedding gown. I would prefer to buy a ready made one as I would not have to put in a lot of efforts then. I am also looking for wonderful dresses for three of my bridesmaids. I am really worried as the time is running out. Do you recommend http://wedding101.com.au/ to find suitable outlet.

We all need a little glitter come the festive season, and brides are no exception to this rule. As previously explored, winter weddings – preferably made white with snow –...