During March Design Society (DS) and V&A learning teams hosted the first maker in residence in Shenzhen as part of DS pre-opening activities and the British Council’s Hello Shenzhen project. We set UK based designer and engineer Ross Atkin a brief to engage students and young people with problem solving through making using objects that will feature in the opening exhibitions of DS and the V&A Gallery as inspiration. This ambitious learning project forms part of DS’s pre-opening public programme which aims to engage with the community in Shenzhen and test out approaches and pedagogies for the learning and events programme which will be launched once DS opens later this year. Here Ross shares his experience during the residency.

Arriving in Shenzhen I was overwhelmed by two qualities that seemed to permeate the city – speed and openness. In my first week, thanks to introductions from the brilliant people at Design Society and V&A, The British Council and my TV buddy Ryan White, it felt like the doors to a world of magic were thrown open to me and the people inside said “Come in. Look around. How can we help? Add me on WeChat!”.

Most spectacular was the Huaqiangbei electronics market which I first experienced following Ryan as expertly navigated the vast complex, picking up bluetooth chips, books of tiny surface mount components, and specialist tools from tiny tweezers to a huge microscope. (Ryan was in Shenzhen for a week building a set of prototypes for a brand new piece of assistive technology – within the week!). In tow, Ryan’s fellow Reading Hackspace founder Richard Ibbotson, explained what we were seeing: “that milling machine is for cutting the tiny RAM chips off iPad motherboards so upgraded ones can be surface mounted”; “they love analogue voltmeters here, they know exactly how the needle moves during a smartphone’s startup process so they can tell what’s wrong with the phone by watching it”; “those jigs are for pressing the various layers of all the different smartphones together”.

In a huge office above the market I met Noel Joyce, head of design at HAX “the world’s first and largest hardware accelerator”. We toured the desks and workshops looking at late-stage prototypes of products that had raised millions of dollars on Kickstarter and met the inventors who hoped their products would be the next to. On the other side of town I attended the opening of X Factory, a vast purpose built development facility in the middle of a colossal new property development.

I also met people who were making stuff without big-ticket venture funding or government grants. At Troublemaker where Henk and his colleagues teach young children proper engineering and help people launch hardware products on a shoestring, all from two tiny pods in a co-working space. Eating dim sum with Jesse Vincent who is making an “heirloom grade” wooden keyboard and artists-come-electronics-entrepreneurs Matt Mets and Honghong Lu from Blinkinlabs. At Litchee Lab, the makerspace that was kindly hosting me in collaboration with Design Society, where, by day, the founder Li Liting and her team introduce kids to both art and technology and by night, talented engineers like Janek Mann and Abed Bukhari mix client projects with work on their own inventions.

For the actual project, working with the Design Society and V&A learning team, we picked an ambitious challenge. We would work with design students from two Shenzhen further education institutions to create interactive toys in partnership with a school for children with autism.

It was tough and not everything worked as well as I would have liked but I’m really pleased with what everyone came away with at the end.

We used objects that will feature in the V&A Gallery when DS opens to introduce the students to user-centred design and how both form and technology can affect people’s responses to products. I was really impressed by the level of discussion this provoked amongst the students.

To get the students to actually do user centred design of interactive toys we needed to do research at the school, learn how to build and program the interactive toys, test them out with the children and teachers, and digest the design insights from that testing – and we only had five sessions in just over a week. 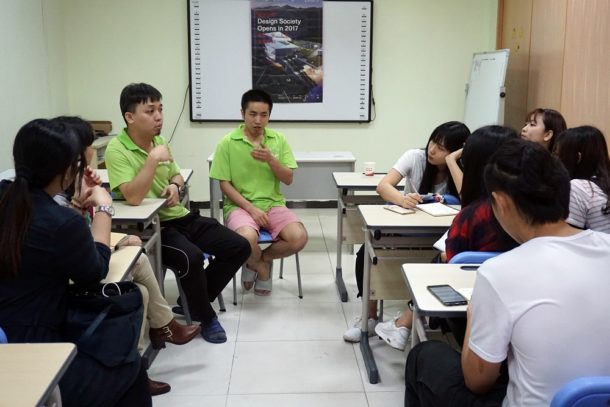 Students interviewing teachers at the school

The design students worked incredibly hard and came to the project with really open minds. It was great to see how they connected with the children with autism when they first visited the school and built moving toy Crafty Robots together in an immersive co-creation activity. They learned about how to engage the different children, and about their sensory preferences. They came away with strong insights and clever ideas.

Getting them building interactive toys (comprising apps and connected physical objects) themselves was always going to be tough but I am happy to have exposed them to powerful digital prototyping tools like Arduino and MIT App Inventor which I hope will become part of their practice in the future.

Closing the iterative loop and testing the interactive toy prototypes back at the school the students identified insights that could feed directly into design decisions for future iterations of the toys we were working on. Despite, or maybe because of, the sketchy nature of some of our prototypes, I think they could see the benefits of testing ideas early with end users and iterating based on what they learned.

I think the children with autism got a lot out of their interaction with the students and some of them also really seemed to connect with some of the prototypes. It was fantastic to see how Design Society could function as a facilitator of these kinds of connections – between educational institutions like Shenzhen and Xin’an Polytechnic, design practitioners like myself and community groups like the autism centre.

The huge public robot making workshop we held in a community centre to celebrate the end of the project and showcase and share the student’s work with a broader audience was a lovely illustration of this idea.

I’m really looking forward to seeing what connections Design Society will make next and what magic will come from it!