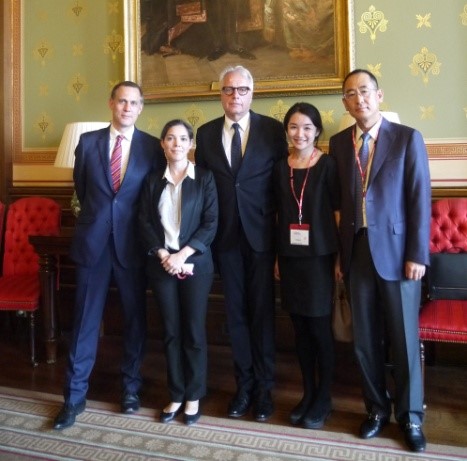 Midnight on Monday 16 June 2014, the final instructions for the signing ceremony at the Foreign and Commonwealth Office (FCO) came through. Mr Sun, Vice-President of China Merchants Group (CMG) and Chairman of China Merchants Property Development (CMPD), had arrived just a few hours earlier. The next day, China Merchants Group and the V&A officially entered into a five year collaboration agreement during a ceremony held at the FCO and opened by David Cameron and Premier Li.

After many months of hard work to define the best way to approach the project and to understand our Chinese partners and their ambitious plan for the new design museum, the signature on 17 June 2014 marked the beginning of an exciting new phase for V&A’s international initiatives.

Engaging internationally is part of the V&A’s ‘DNA’. However, during time of austerity, museums like the V&A ought to be increasingly innovative with their international initiatives to ensure they can develop sustainable and meaningful new international partnerships based, at the same time, on sound financial and cultural principles.

With this new collaboration, the V&A is entering for the first time in a multi-year partnership with important Chinese business players, China Merchants Group and China Merchants Property Development, the real estate flagship of CMG, to support the development of China’s first major design museum in Shenzhen.

In many ways, the genesis of this new institution offers parallels with the genesis of the V&A. The Shekou Design Museum is conceived at a time when creative industries are considered as a pillar of future Chinese’s economic growth characterised by a move from ‘made in’ to ‘create in China’. In her book, China’s Design Revolution, Lorraine Justice talks aboutthe move ‘from the often cost-competitive manufacturing business model to value-added design, branding’. In this context, the new museum aims at promoting Chinese design to an international audience, as well as to present the best international design in China. As a world leading museum of art and design with the ambition to offer a meaningful platform to explore and contribute to today’s global debates about art, design and creative industries, the V&A wants to engage locally with fast growing and emerging new design scenes around the globe. Through this collaboration, we want to develop deeper and more inclusive ways to engage with creative communities in China at this pivotal moment.

Shenzhen also offers an extremely interesting and stimulating environment for such a project. With more than 10 million inhabitants, Shenzhen is one of the major Chinese cities located in Guangdong Province immediately north of Hong Kong. It was set up as a Special Economic Zone in the 1980s and is still one of the most successful ones. Shenzhen is also a major manufacturing centre in China and was awarded in 2008 by UNESCO the status of City of Design. That same year, the city of Shenzhen was also one of the three Chinese cities chosen as the focus of the successful V&A exhibition ‘China Design Now’.

The building of the Shekou Design Museum has been designed by Fumihiko Maki, the renowned Japanese architect. It will open at the end of 2016.  The V&A will have a dedicated gallery within the museum complex to show curated displays from its collections as well as space to present major V&A exhibitions. We will also play an advisory role in helping the Shekou Design Museum develop its own collections and provide training for the museum’s senior management team. A curator from the V&A will take part in a three-year secondment in Shenzhen to work as Head of the Shekou V&A Partnership in China.

One of the main challenges ahead of us is to ensure that while we bring our expertise and collection we fully recognise and engage with the local reality. Indeed, the point is not to create a ‘satellite’ but rather to bring V&A’s set of expertise and experience to support this new museum and our Chinese partner to develop and grow the Shekou Design Museum as a new internationally credible and inspiring player in the evolving Chinese museum’s landscape.

As in all our international initiatives, we are looking at developing two-way relationships where the institutions as well as the individuals involved are transformed in a positive way by this cultural exchange. During the past months, we have worked closely with our Chinese partner to reach this first milestone. The team involved in the negotiation on both side has been enriched by the process. We have learnt to know each other better and we are now looking with excitement at the next steps. We will try to come back to you regularly both from Shenzhen and London to keep you updated on the progress of this unprecedented international collaboration.