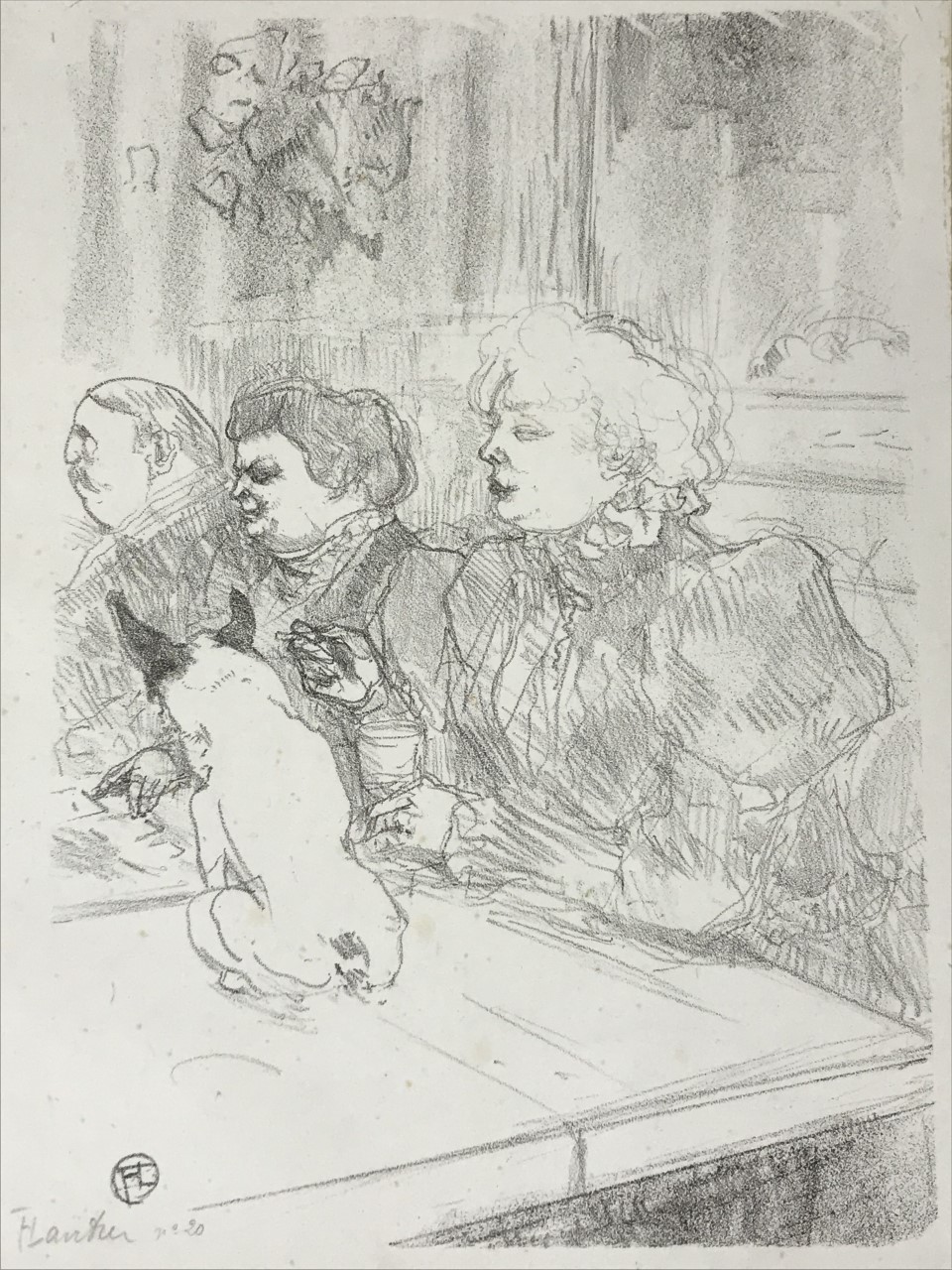 This lithograph print shows the interior of a lesbian bar called La Souris (The Mouse) in the 9th arrondissement of Paris. It was one of several bars in Pigalle popular with bisexual and lesbian women at the end of the 19th century. Other notable nightspots were La Brasserie du Hanneton and the Le Café de Rat-Mort, simply named because people complained the bar smelled like a dead rat!

Toulouse-Lautrec was a regular drinker in all three establishments, sketching and painting the clientele of the 1890s. This print depicts the bar owner, Madame Palmyre, about whom relatively little is known. One of the most detailed descriptions I found is in the 1962 Perruchot biography of Toulouse-Lautrec:

‘Madame Palmyre, sat enthroned behind her counter. She was a large woman, with a generous heart and a harsh exterior, who had certain characteristics in common with her little bulldog, Bouboule. Cheri-Bouboule was a remarkable dog. He hated the whole tribe of women and, hideously jealous of his mistress’s favours, frequently bit the calves of the customers.’

The archive of Bernard Vassor in France contains menus and a business card from La Souris, as well as the tantalising information (alas without a source given) that Madame Palmyre liked to surround herself with an entourage of androgynous men. If they were in the bar that night, Toulouse-Lautrec sadly omitted them from this scene!

Paris was a thriving epicentre of emerging lesbian culture. So much so, that in a dictionary of erotica by Alfred Delvau in 1864, a lesbian was described as a ‘Parisienne qui semble née à Lesbos, terre des nuits chaudes et langoureuses’ (A Parisian woman who seems to have been born in Lesbos, land of warm and languid nights).
Many novels and articles in the popular press cemented this reputation. They were mainly cautionary tales warning of the dangers of sexual immorality or bawdy fantasies written by men. In the brilliantly researched ‘Lesbian Decadence’ by Nicole G. Albert (Harrington Park Press, 2016), Albert identifies a single novel by Jehan de Kellec as being ‘virtually alone in presenting a positive view of sapphism’, entitled ‘À Lesbos’ (In Lesbos), 1891. Nothing is known of de Kellec (which is presumed to be a pseudonym), but the novel has been digitised with free access on the Bibliothèque nationale de France website here:

If you cannot read French, the superb cover design alone is worth a click!