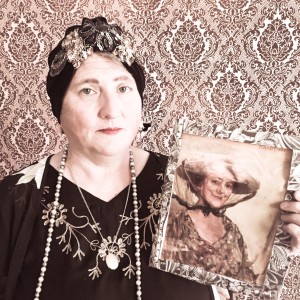 Clemence Dane is the ‘invisible woman’ of British 20th century culture: a prolific and popular writer and artist, described by her great friend Noel Coward as ‘a wonderful unique mixture of artist, writer, games mistress, poet and egomaniac.’

Yet her name and achievements are almost forgotten today: she was the first British woman screenwriter ever to win an Oscar, the inspiration for eccentric medium ‘Madame Arcati’ in Coward’s Blithe Spirit and a highly-regarded scriptwriter in Hollywood.

We invite you to join acclaimed writer and performer Rose Collis as she talks about the life and work of this extraordinary woman, the subject of her new Arts Council-funded one-woman play, ‘Wanting the Moon’.

Join us on Wednesday 1st February, 13:00-13:45, in the Museum’s Lydia & Manfred Gorvy Lecture Theatre. This lecture is part of the Museum’s Lunchtime Lecture series. Lectures are free and no booking is required.

Stories from the Archives

Rose speaking at the Museum is particularly apt as the V&A Archives hold a vast selection of material relating to Clemence Dane, that Rose made use of when researching and developing her play.

The archive material (reference code THM/120) came to the Museum in 1999 as a gift of the estate of actor Marius Goring. It includes: playscripts, screenplays, poems, radio scripts, correspondence, photographs, press cuttings including reviews and publications, programmes, novels, articles, lectures, speeches and broadcasts.

There are also a number of museum objects held in the Theatre & Performance collections (see here), including photographic portraits by Paul Tanqueray and a bronze-cast bust she made of Ivor Novello as Lord George Hell in The Happy Hypocrite.

Born Winifred Ashton (her pseudonym Clemence Dane taken from the church, St Clement Danes on the Strand, London), Clemence Dane had a fascinating, if chequered career, including Hollywood adventures with Greta Garbo and Marlene Dietrich and penning the controversial lesbian novel Regiment of Women (1917).  The Museum’s archive enables researchers to gain an insight into both the work and character of this novelist, playwright, lyricist, sculptor, painter, actress and French teacher.

And she certainly was a character – being noted as the inspiration for Madame Arcati speaks for itself! Among her large circle of theatrical acquaintances she was considered an eccentric. Despite having a mastery of words when writing, she had a particular innocence that resulted in unintentionally entertaining malapropisms. In his memoir, Life’s Rich Pageant, broadcaster and columnist Arthur Marshall recalls:

…To use correctly, in a literary sense, the words ‘erection’, ‘tool’ and ‘spunk’ was second nature to her. When wishing to describe herself as being full of life and creative energy, she chose, not really very wisely, the word ‘randy’. To hear a large and imposing women of fifty announcing to a roomful of actors that she felt randy was really something.

Thank you for this, Dawn Hoskins!

I have heard about Clemence Dane. She is the ‘invisible woman’ of British . We all waiting for the news about her. In 2017 we all will wake up with her extra ordinary tallents.

I have just bought a book signed by and given to “Winifred” by Eddie Marsh so I particularly enjoyed your piece, knowing that this volume passed through her randy hands!