The V&A’s major exhibition of one of Britain’s most iconic musicians, ‘David Bowie is’ opens on 23 March and runs until 11 August 2013. As the learning representative for the exhibition, one idea for a schools’ project was to work with students from his Secondary school on ideas inspired by the show. Was the school still actually there?  Would they be interested in working on something? Luckily, the answer to both questions was ‘Yes’ and ‘Yes.’ 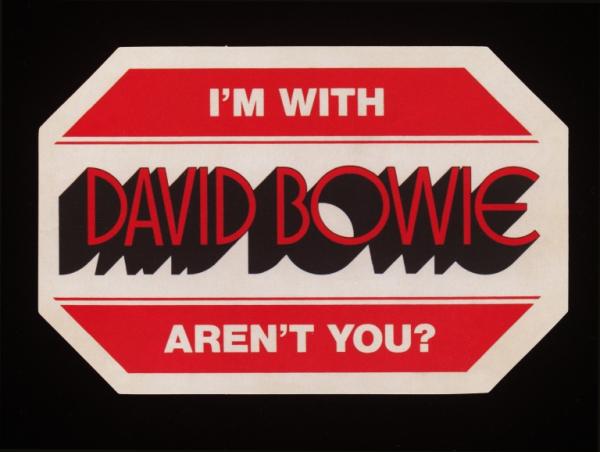 Ravens Wood School in South Bromley is now an 11 – 16 boys’ school with a mixed sixth-form. In the early 1960s it was Bromley Technical High School and educated one David Robert Jones (as Bowie then was.) It was here that the inspirational art teacher Owen Frampton, father of Peter, taught the teenager who has so often cited him as a major influence on his life.

Today, of course, much of the school building is new but there is enough left of the old school that Bowie would recognise – the view over the playing fields to the large white houses beyond, the house opposite the schools’ entrance, proudly stating ‘Built in 1875’ on the front door, the reception area to the school itself with the dark, wood- clad pillars. Squint and you can almost see ‘The Kon-rads’ tuning up in the hall…

Annabel Davies, Head of Music at Ravens Wood, Laura Yandell, Head of Dance and Drama, and myself first met in July 2012 to talk about the exhibition and what we might work on together. As the exhibition hadn’t been officially launched to the press, they had to swear themselves to secrecy about the project until September; not even the students could know what the focus was to be…

Various meeting were then held over the next few months whilst we tried to find a focus for the work. As Bowie’s career encompasses so much from music to video to fashion and beyond, it was initially difficult to pin down one area. An early idea, for which I’m happy to take the blame, centred on the students launching a new ‘Artist’ on an unsuspecting public, a visionary who went by the name of ‘Major Tom’. Eventually, Annabel and Laura came up with a workable scenario for a film involving an ‘Everyman’ slowly moving through a hum-drum life and metamorphosing into a Bowie-inspired character. The creation of a film response to Bowie’s work and career became the agreed way of capturing all potential ideas.

It was around this time that Jackie McManus, Caroline Stevenson, Joceline Howe and Luke Craggs, colleagues from University of the Arts London, Widening Participation (UAL) became involved in the work and bought in other ideas and their expertise too.

The 30 or so students are part of the academies at the school: Ravens Academy of Performing Arts and Ravens Wood Music Academy. They have 5 timetabled sessions a week in their chosen art. They were shown presentations around ‘ Growing up in the 70s’  which I wanted to use to intrigue the group by contrasting it to today – what style of bike might you ride? What would you eat? What music might you listen to? How would you listen to it?

This, of course, was a great excuse to trawl the internet (and V&A website) for images of ‘Chopper’ bikes, kipper ties and platform shoes, Findus Crispy Pancakes, boxy TV sets with 3 channel buttons and filmed music performances by the likes of Gilbert O’ Sullivan, The New Seekers and the Royal Scots Dragoon Guards…(Their version of ‘Amazing Grace’ was number one in the UK record charts in April 1972 and spent an incredible 24 weeks in the charts!) 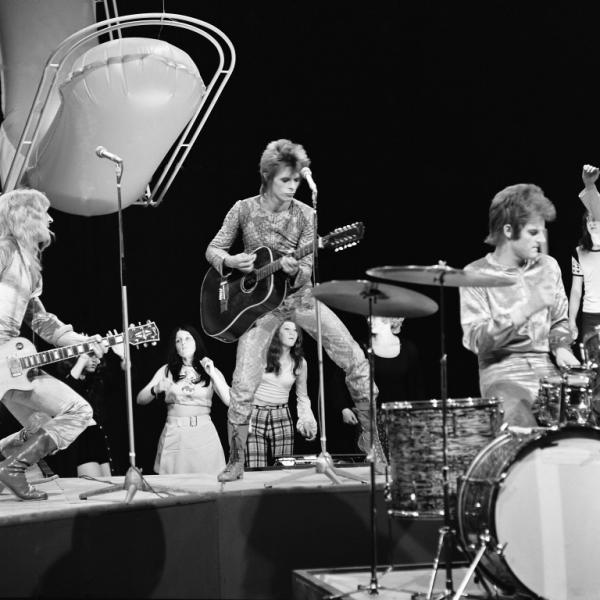 This culminated in showing the group the now famous TV clip from ‘Top of the Pops’ broadcast on 6 July 1972 of a shock of red-haired David Bowie singing ‘Starman,’ his arm slung nonchalantly around the shoulders of Mick Ronson, to a TV audience of tea-spluttering appalled mums and dads and a fairly large number of curiously engaged teenagers. It does still have quite an impact, especially after watching Donny Osmond’s ‘Puppy Love’…Truly, ‘The past is a foreign country; they do things differently there’…

This was followed by a presentation by Kathryn Johnson, Research Assistant on the exhibition, about the overall themes of the exhibition and a look at the video to ‘Where Are We Now?’ which Bowie had released a few weeks earlier. I was interested in how the students would react to this song, it being quite slow and reflective, and I was surprised how positively the group responded to it. 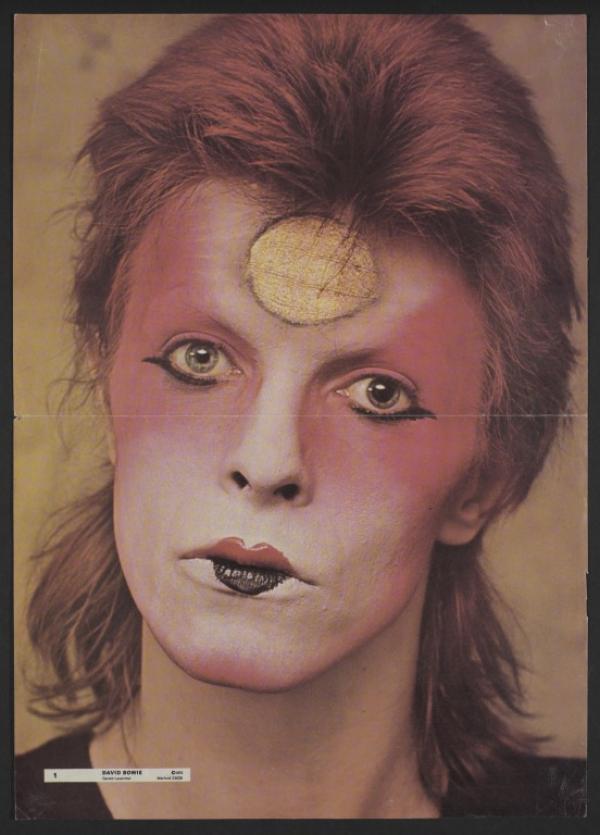 They were given time to research, come back and present their findings to us and begin thinking of some potential ideas for content, helped by Caroline, Joceline and Luke. It was very clear from the start that, having the personal connection to the place that Bowie was himself taught in, gave the group a real desire to find out more. They were, of course, already aware of the connection (a large photo of a ‘Ziggy’ –era Bowie hangs in the entrance to the music spaces and a few uses of ‘Heroes’ throughout the Olympics may have helped raise his profile even more recently!) but this project seems to be a timely opportunity to explore what it might mean to them on a deeper level, to be ‘where he started’…

A month then passed, during which the group did further research to feed into the film. One student has photographed street signs around the area that Bowie would have known, for example. They seemed particularly keen to explore notions of masculinity and femininity and how Bowie was able to play with these ideas of what was / is ‘acceptable’ and ‘unacceptable’ and why.

In the February session, the group presented further findings and outlined an interesting twist on the childhood game, ‘Exquisite Corpse’, in which characters are developed step-by-step on a piece of paper and folded over so that the person drawing hasn’t seen the previous one and unexpected combinations are produced: the head being drawn first, then the body, the legs etc. They had done this for themselves, mixing ‘male’ and ‘female’ clothing and accessories. Each student has named one of these characters and will hopefully develop them during the work.

It was a great coincidence that during the day and visiting the art department  was Brian Eacersall, a former art teacher at the school who had taught Bowie along with Owen Frampton. He spoke to the students, answered their questions and remembered a, ‘quiet boy…who knew exactly what he wanted to do!’ although little did he think that nearly 50 years later, he’d still be talking about him.

The session ended with the group showing a movement piece which was inspired by Michael Clark and the influences he himself has drawn from Bowie’s work, all performed to a live rendition of ‘The Man Who Sold the World’. It was a great dramatic end to the day and left the group buzzing with future ideas for their film.

I’m really interested to see how this work will develop and what it will reveal about the influence of David Bowie on these students and look forward to welcoming them to a visit to the exhibition on 25 March and a day of tours and activities to inspire them further. I’ll update you then and, hopefully, include comments and thoughts from the students, colleagues and teachers themselves.

To find out more about the exhibition ‘David Bowie is’ visit: http://www.vam.ac.uk/content/exhibitions/david-bowie-is/

Great to see Mr Eacersall getting mentioned here- he was our Graphic design teacher at Wildernesse Sevenoaks whose lessons are very well remembered- i still cant draw for toffee but i remember Mr E’s dedication, encouragement and humour and remind my 13 year old music obsessed daughter that I had the same art teacher as David Bowie at every opportunity.

Hello Adam, I have just read your very kind words. My Art Department was
modelled on that of Owen Frampton who not only inspired his pupils but also his colleagues. I do remember your name, if you were in the design group you must have been fairly good at drawing or else very keen on design as a subject. I still meet up with ex-pupils and we have been meeting at the V & A to visit a suitable exhibition and have a chat.Send me your email if you would like to join us this year.

There is no such place as “South Bromley”, the school is in the village of Keston.

One for Brian Eacersall, do you remember music teacher Norman Brown? In 1973, at the very height of Bowie’s Glam Rock popularity, Norman asked the kids in our music class if they wanted to hear anything in particular. One kid told Norman that he had an LP with him, Bowie’s work “Hunky Dory”, to which Norman replied “I don’t think that we will ruin our stylus on that”. I remember thinking at the time of the biblical lines “A prophet is honoured everywhere except in his home town”.