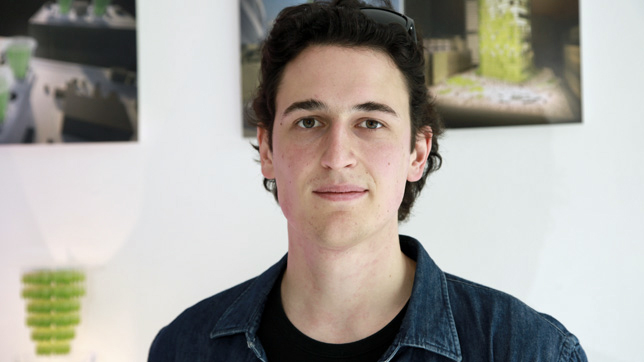 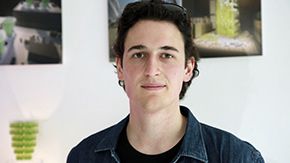 Julian Melchiorri is a design engineer, biotechnologist and entrepreneur based in London. Internationally known for his visionary ‘’synthetic leaf’’ projects, Melchiorri proposes radical environmental solutions for urban and industrial settings through an innovative exploitation of biological microorganisms and materials to convert waste and pollution into valuable resources.

Earlier in his career, Melchiorri designed and engineered both products and manufactoring processes for the Italian lighting company ‘’Catellani & Smith’’ and for the London high-tech collective ‘’Random International’’, exploring the connections between the digital and physical world through interactive experiments and massive scale installations, utilising a multitude of technologies such as digital, sensing, robotic and hydraulic technologies.

Melchiorri subsequently enrolled in the Innovation Design Engineering programme, a double Masters in Science and Art jointly run by Imperial College and the Royal College of Art in London. Over this period, Melchiorri cultivated his interest and skills in synthetic biology, biomimicry and biomaterials through intensive laboratory experimentation aiming to harness nature’s efficient technologies to solve major environmental and social issues deriving from global warming, pollution and population growth.

After working on photosynthesising biological devices for several years and following his latest bio-based inventions, Julian founded a company called ARBOREA to develop and deliver products based on novel synthetic leaf technologies to efficiently convert carbon dioxide (the major reason of global warming), into oxygen and valuable resources such as energy and bioproducts. 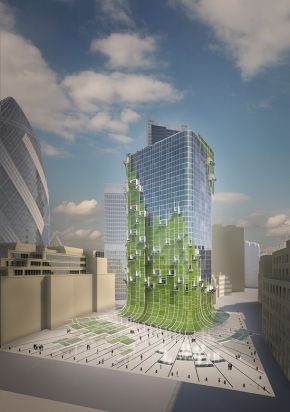 My career-long fascination with natural phenomena and biotechnologies inform my design and engineering practice through the implementation of biochemical reactions, bio-inspired structural optimisation and the mimicking of biological mechanisms and technologies to efficiently solve problems and increase the quality of our lives.

From the early stages of my career, I was able to explore and experiment with light, a natural phenomenon which is a fundamental part of all life on earth. Indeed, light enables all life on earth mostly through photosynthesis, the chemical reaction which involves microorganisms and plant cells to convert carbon dioxide into oxygen and sugars only using water and light.

Over the last century, our constantly growing population is burning fossil fuels and destroying plant life, basically forcing a change in the atmosphere and climate, reverse-terraforming our planet. Having this constant issue in mind, I experiment with ways of making materials that can efficacily photosynthesise and I explore how this can revolutionise the world around us.

I embraced this natural process in my latest “synthetic leaf” technologies and I am now the CEO of ARBOREA, a biotechnology start-up based at Imperial Incubator, where scientists and engineers develop synthetic leaf technologies and deliver products and solutions to fight global warming and resource scarcity on a massive scale.

I also believe that these technologies can revolutionise our urban environment both at a product and architectural scale by purifying the air we breathe, sequestrating carbon dioxide and producing valuable bio products, only using water and light.

Research interests at the V&A

Given the V&A’s pioneering vision to showcase manufacturing and engineering innovations, and in conjunction with the 2016 Engineering Season at the V&A, my plan for this residency is to explore how the latest advancements in biotechnology and engineering can be applied to everyday objects and architecture in order to increase the quality of our lives.

If we look at every natural complex habitat, from rainforests to coral reefs, we can see how these places are constantly evolving, changing and adapting to environmental changes, dynamically reacting to them. Paradoxically, our cities tend to remain static and resistant to change.

I believe in a new renaissance where biomaterials, living objects and architectures will shape our future for good by dynamically reacting and harmoniously adapting to the environment. For this to happen, we need to bring these technologies from industrial applications to the human scale, and to rethink interactions and aesthetics in response to biologically driven functions and chemical conversions.

The V&A’s collection will be a fundamental starting point to re-imagine these technologies at a human scale. By exploring the Museum’s collections, I aim to create functional everyday living objects which dynamically react with the environment and wish to inspire the public to reimagine our future and question how biotechnology can positively change our everyday lives.

I visited your studio today with my class, History of Design…and I was completely fascinated by your project. I would very much like to bring my flatmates to one of your open studio sessions. When are your Open Studio Sessions again? Thank you so much!