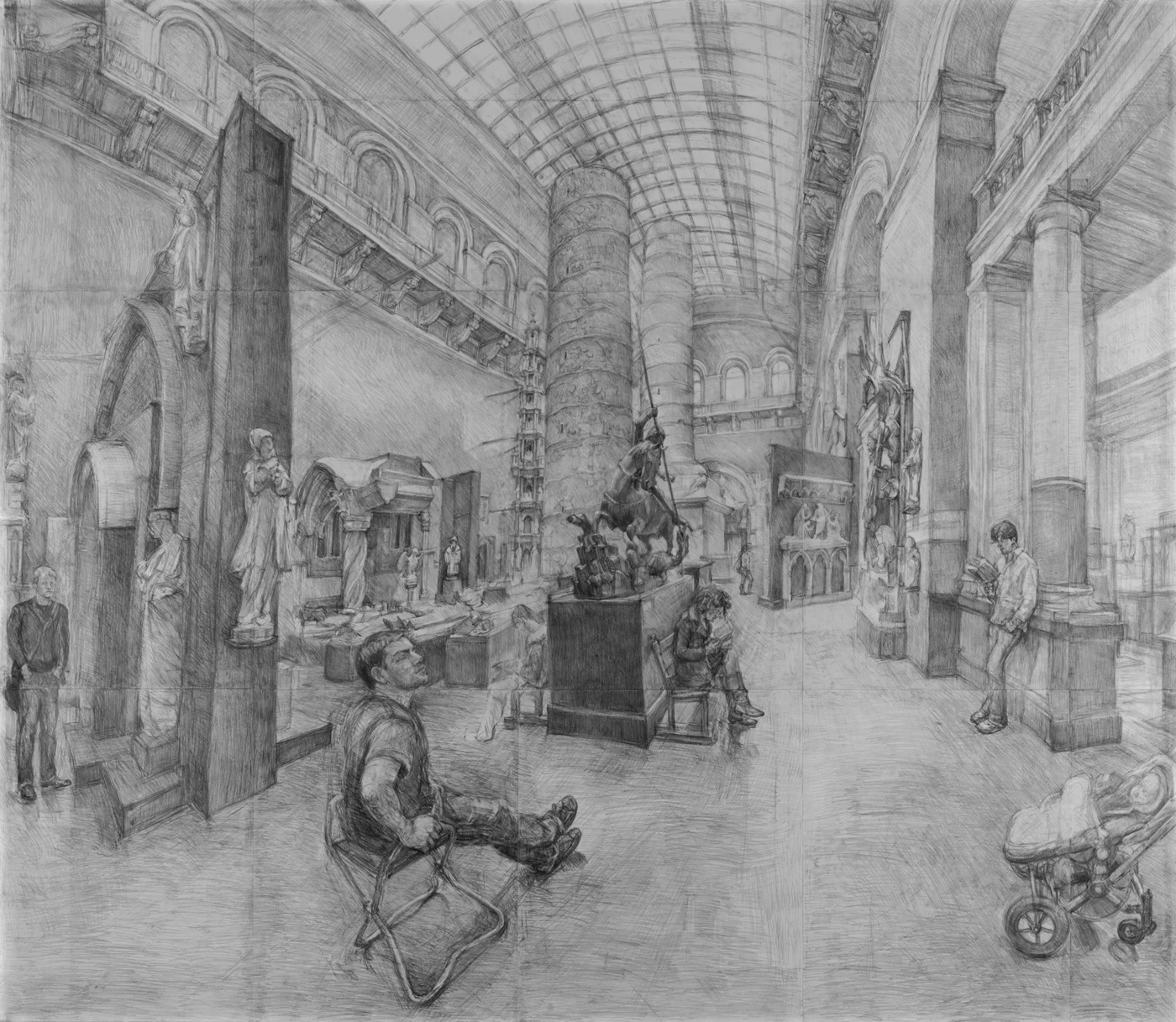 I have always loved the V&A. It’s a vibrant, busy place which counteracts the stereotype of museums as stuffy, quiet and empty. I wanted to portray contemporary life by creating a narrative with the space itself and the diverse mixture of people that use it. The courts themselves are incredibly impressive to walk into and I wanted to convey the sense of awe one feels. Prince Albert built the Cast Courts specifically for artists, so that they could copy and learn from the casts. It’s so important that artists have the opportunity to follow in this tradition of learning from past masters.

The original drawing of Trajan in the Cast Court is 6ft x 7ft; the V&A New Court drawing is about 10 ft x 4ft. I naturally work on a large scale. The size of a drawing effects the way one enters it; I wanted to give the viewer the sensation of being present, as though they were walking into the gallery themselves.

Many visitors asked me why I didn’t just work from a photograph. I explained that working from a 2 dimensional surface with a fixed perspective does not allow for the movement of one’s head in 3 dimensional space and could not convey the experience of walking into the Cast court. Also, the conditions in which one draws in effect the atmosphere of the drawing, it’s liveliness and feel. For example, I was occasionally permitted to draw during the beginning of the V&A Friday Lates when the music was so loud you could feel it vibrating through the courts. I wouldn’t have felt that atmosphere working at home from a photograph. The figures in the drawings help to indicate the vast scale of the Court. It is the ultimate challenge to convey a convincing space in perspective whilst also depicting a living being and their unique presence.

I drew in the Courts on and off for over a year. My drawings got larger and larger and I had to rely on passers by or the security guards to help me unravel my drawing and fix it on to my drawing board and easel. Artists are thankfully allowed to use easels in the V&A. The security guards often mistook my easel for a tripod, which photographers need special permission for. I am eternally grateful to Hilton Whitehall, former security supervisor, who was a great help and made the experience of working there easy and enjoyable. It was often difficult on the days that he wasn’t there. Another security guard, Colin Benjamin was also especially helpful, placing barriers around me and my work to prevent the public from tripping over me.

I had many conversations with the public during the months that I was there: it’s inevitable when you’re drawing that you attract attention. I had trouble concentrating and was approached every five minutes. People often took photographs of me and even videos without asking my permission. I was often asked whether I had done the drawing that I’d been working on for months that morning, and it was only 11am!

I met the figure in the second drawing, George Higgins, on the tube. He was dressed in his Chelsea Pensioner attire and I asked if he would come and sit for me. He was one of the most reliable models I have ever had. He was always on time and stayed still when he was sitting. He even let me choose which hat he should wear. I chose his special royal hat, which resonated compositionally with the hat worn by the Marchese Spinetta Malaspina, the figure on the horse in the monument across the room from him. George was in his eighties and being a Chelsea Pensioner reflected on death a great deal. The tombs in the Court and George’s great age and status were in thematic harmony. It also seemed fitting that George was a local to the museum, though he hadn’t been in it much before he sat for me. In fact that’s true of most of the models for the figures in the drawings.

A solar photo etching of Natasha’s drawing ‘Trajan in the Cast Court’ has recently been acquired by the V&A.

Plaster casts and the value of knowledge