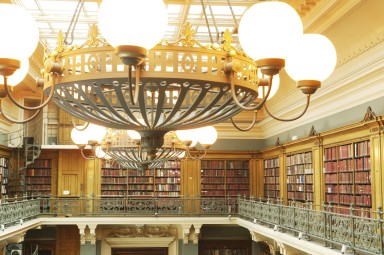 Those of you who have used the National Art Library’s reading rooms, or who may even be sitting in them as you read this, will not have failed to notice how beautiful they are.  Built between 1876 and 1884, the reading rooms were one of the show cases of the South Kensington Museum (now V&A), boasting innovation such as electric lighting.  Apart from the introduction of various pieces of technological equipment, the library service counter in 1966 and the new chandeliers in 1986, the interiors have remained largely unchanged since their inception. As a result, the Library is in demand as a location when a ‘period’ library feel is required for a film, television or magazine piece and over the years we have taken part in a wide range of projects.

As you would expect, filming often takes place because items in the Library’s collection are the subject of the piece, with an expert talking about the item with the Library setting the context.  Collection items such as Leonardo Da Vinci’s notebooks, Matisse’s Jazz and the recently digitised Entartete Kunst have all recently been highlighted in this way.

Sometimes it is the rooms themselves that are the focus of the item, with a presenter talking about the V&A’s history or its collections: the BBC’s Flog It!, Bargain Hunt and Fake or Fortune, amongst others, have all featured the Library’s interior.  At others times, we’re used as a location when a producer just wants to convey a ‘scholarly’ setting, even when the piece may be nothing to do with the Library or the Museum: authors are given extra gravitas when filmed against our bookish backdrop, talking about their latest literary work.  Fashion and interiors magazines also use us to create a similar atmosphere, draping models, displaying clothes or placing objects in amongst the Library’s collections.

When we are used as a film set, we are usually filmed as a generic, ‘period’ library rather than as the National Art Library per se. A recent example was the filming of Mortdecai, where the Library was the scene of an important discovery by the main character (no spoilers!).  Suffice it to say that the presence of Johnny Depp and Ewan McGregor in the Library for the day was quite a treat for all staff involved!

However, sometimes we have masqueraded as a specific ‘other’ library, where filming in that particular library has not been possible.  In the film The Oxford Murders, the NAL became the Bodleian Library, with Elijah Wood and John Hurt acting out one of their scenes here.  For the BBC’s New Tricks, with the introduction of some fake lamps and signage, we became The London Library for an episode.

We agree to the filming requests on the proviso that the fabric of the building won’t be affected, that collections will not be at risk and that filming will take place out of normal opening hours and won’t impact on our users.  We are glad, and feel very privileged, to have such an inspiring space to offer for filming. In addition to it being a useful source of revenue for the Museum, we hope that taking part in filming projects gives our services and collections extra exposure and will be of interest to audiences who may not otherwise have become aware of us.  So, the next time a library appears on screen, take a second look and it may just be the National Art Library you are watching.

For further information about using the National Art Library, or the V&A as a location, please see Filming and photoshoots.

For more information about the history of the Library’s interior, please see History of the V&A and the Schools of Design study guide