Catch the final week of ‘The History of Photography: The Body’ display in Gallery 100 of the Museum, which has been extended until March 9th.  If you have been on any of our recent LGBT guided tours run by our marvellous group of volunteers (meeting at 4pm on the last Saturday of every month at the Grand Entrance Meeting Point), you may have been taken through Gallery 100 as the display contains a glorious selection of LGBT material from a wide range of artists who I wanted to take the opportunity to highlight briefly before the display ends.

First off and in no particular order, Ruth Bernhard.  Born in Berlin in 1905, she moved to New York City in 1927 and quickly became involved in the burgeoning gay and lesbian subculture of the city.  New York had queer drag balls even then, with raucous masquerade parties at the now historic Webster Hall.  Bernhard was part of a creative set of bisexual and gay women including noted photographer Berenice Abbott and her lover, the art critic and historian, Elizabeth McCausland.  Bernhard moved cross-country to San Francisco, living to be 101 years old and working until very late in life.  She is best known for her photographs of nude women which are a masterclass in light, form, and precision.

Her aesthetic has some overlap with the more classical, monochromatic nudes by Robert Mapplethorpe. He is not represented in this display but one of his mentors is here.  George Dureau was a larger-than-life character and a well-known figure in New Orleans as a figurative painter and photographer.  We have a series in the collection with one included here depicting Emmett Johnson, one of Dureau’s key muses. 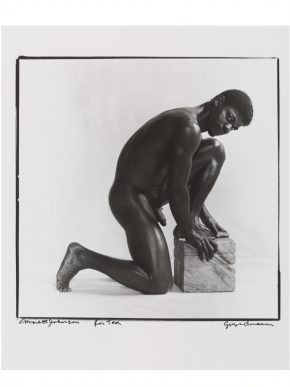 Another artist who repeatedly explored the black male nude was Nigerian photographer, Rotimi Fani-Kayode.  Considered one of the first African artists to place his own gay identity proudly at the forefront of his work, he wrote a touching and revealing essay on his life and art entitled ‘Traces of Ecstacy’, published by Autograph (an organisation he co-founded): “Photography is the tool by which I feel most confident in expressing myself. It is photography therefore — Black, African, homosexual photography — which I must use not just as an instrument, but as a weapon if I am to resist attacks on my integrity and, indeed, my existence on my own terms”.

Pierre Molinier also made a life’s work exploring personal identity politics, albeit in an extraordinarily different way.  Pierre identified as both a gay man and as a trans person in some ways.  They came to the art party late, entering the public domain aged 50+ by opening a door onto a highly fetishized world of kink aestheticism which they’d been cultivating privately in their Bordeaux home studio for years.  Befriending André Breton in the late 1950s, Pierre got into the Surrealist scene but claimed to make art purely as a luxury for their own sexual stimulation.  The photographs and paintings have a uniquely curious appearance and were thoroughly intended to shock, using mainly the artist’s own body alongside mannequins, dolls, S&M garments, and props.  Two auto-portraits feature in the display.

Another member of the Surrealists seen here is Claude Cahun, the trail-blazing French artist whose work challenged accepted norms of gender in the early to mid-20th century.  Cahun boldly stated ‘“Shuffle the cards. Masculine? Feminine? It depends on the situation. Neuter is the only gender that always suits me.”

Cahun had a narrow escape with their lover, the designer and photographer, Marcel Moore, when they were both arrested and imprisoned in occupied Jersey. They had moved there in 1937 and were sentenced to death by the Nazis in 1944 for taking part in the Resistance movement.  Escaping with their lives when Jersey was liberated by Allied troops, they remained residents of the island until their respective deaths in 1954 and 1972.  Buried beside each other in the small churchyard of St. Brelade’s, the Jersey Heritage Trust have a large body of work and archival papers relating to both artists.

Finally, some idealised Italians, immortalised by the Baron Wilhelm von Gloeden. The Baron was one of the earliest gay photographers of the male nude.  Most of his photographs were made in Sicily between 1890 and the start of the First World War, and once totalled around 3000 negatives.  The bulk of these were seized and/or destroyed by Mussolini’s Fascist army in the 1930s for tending towards ‘deviant sexuality’.

Many artists in this niche were creating photographs in exactly the same style so they are sometimes confused with one another.  Another on display here was thought to be by the Baron but is now considered to be by Vincenzo Galdi, who was a model and lover of Guglielmo Plüschow, who in turn was a cousin of the Baron.  Plüschow is also recognised as an key homoerotic photographer of the late 19th century, who’s work fed into the aesthetics popular in homosexual circles at the time, typified by groups such as the Uranian poets and their idealisation of the Ancient Greeks.

Look out also for Leigh Bowery in a trio of ‘behind the scenes’ style photographs by Bernard Bruce during Bowery’s time posing as a life model for Lucien Freud, plus two lovely little daguerreotypes depicting gents lounging in Turkish baths,

and a platinum print ca. 1900 by Baldry & Day depicting a pair of ‘sirens’ who seem to me to be more interested in each other than they would be in bothering with any passing sailors!

This is the final display in these galleries before they are transformed into a breath-taking new photography centre opening in 2018.  Look out for more details on the website over the coming months.