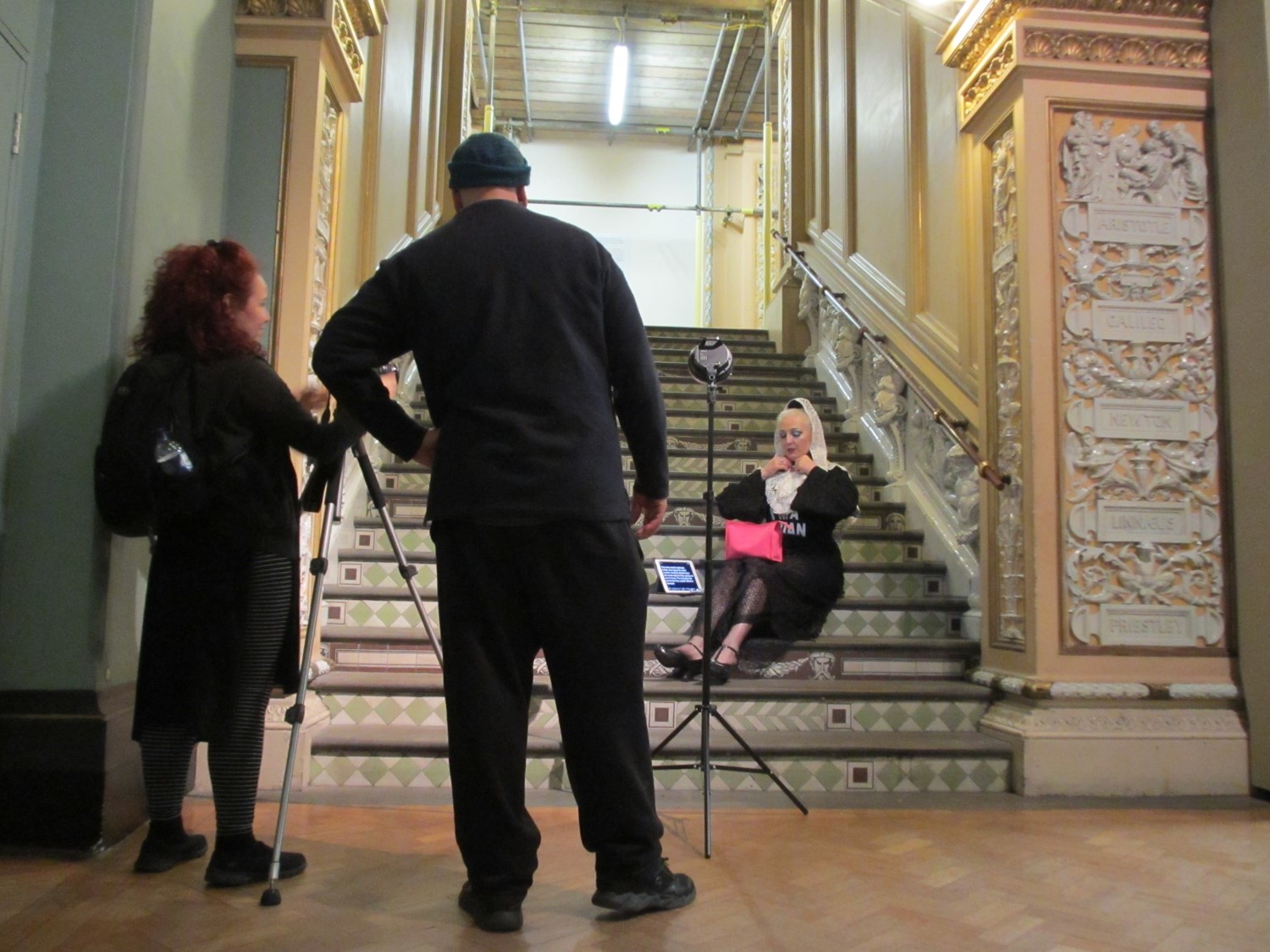 Earlier this month, Zorian (my co-chair in the V&A’s LGBTQ Group) and I spent two long nights working in the Museum out-of-hours. This in itself isn’t something particularly unusual but it was definitely the first time that it has involved: carrying camera tripods and lights through the galleries; in-depth discussions about the intersections between colonialism and homophobia; accompanying someone sporting her ‘Victorian Values Victoriana Lesbian Visibility Look‘; Brechtian poetry; crouching on the ground with an iPad autocue; and a director occasionally hopping around in a rabbit suit!

These unusual nights of activity were undertaken to record film footage for Bird la Bird’s upcoming Armchair Tour of the ‘Queer People’s Knick Knack Emporium‘ which is part of the Being Human festival.

Creating the film footage for the armchair tour involved a lot of walking: back-and-forth across the galleries, the garden and the cafe, plus returns to our meeting room-cum-dressing room for refreshment and costume-changes.

There were plenty of raised eyebrows as we filmed outside the entrance to the Museum – a combination of Bird’s wonderful outfit plus the sight of Divine and John Waters bobbing around on sticks!

The filming has also prompted a number of questions from curious colleagues, not least due to the film props that are temporarily in residence on my desk. With my day-to-day job being focused on Europe 1600-1800 they have good reason to be a bit confused.

Although lots of planning had gone into the film schedules, we also managed to include some more spur-of-the-moment creative ideas, including Bird cheekily slipping into the chair behind the Information Desk.

After all, she does have a lot of information that she’d like to impart … then question, pick-apart, turn-on-its-head and reconsider!

Of course I don’t want to give away too much about the content before the event, so I will simply encourage you to join us on 22nd November to find out more. Key information can be found here. The event is free and booking is not necessary, however, we would greatly appreciate it if you could register your intention to attend here.

The Lecture Theatre is wheelchair accessible and also features an induction loop. Bird’s ‘Armchair Tour’ will be BSL interpreted and audio described.

The films featuring in the ‘Armchair Tour’ will be made available to view via the V&A’s website following the event – I’ll update you as soon as they are up online!

Hello,
I attended the ‘Armchair Tour’ a few weeks ago – it was great! Thank you so much.
I was wondering if and when the performance will be uploaded online?

Dear Michal,
I’m very glad to hear you enjoyed the event – thank you for coming.
Films used as part of Bird’s tour/performance/take-over will be made available online in the new year. I’m afraid I can’t give an exact date for this yet but we will be announcing it on the blog as soon as they are up!
Best wishes,
Dawn