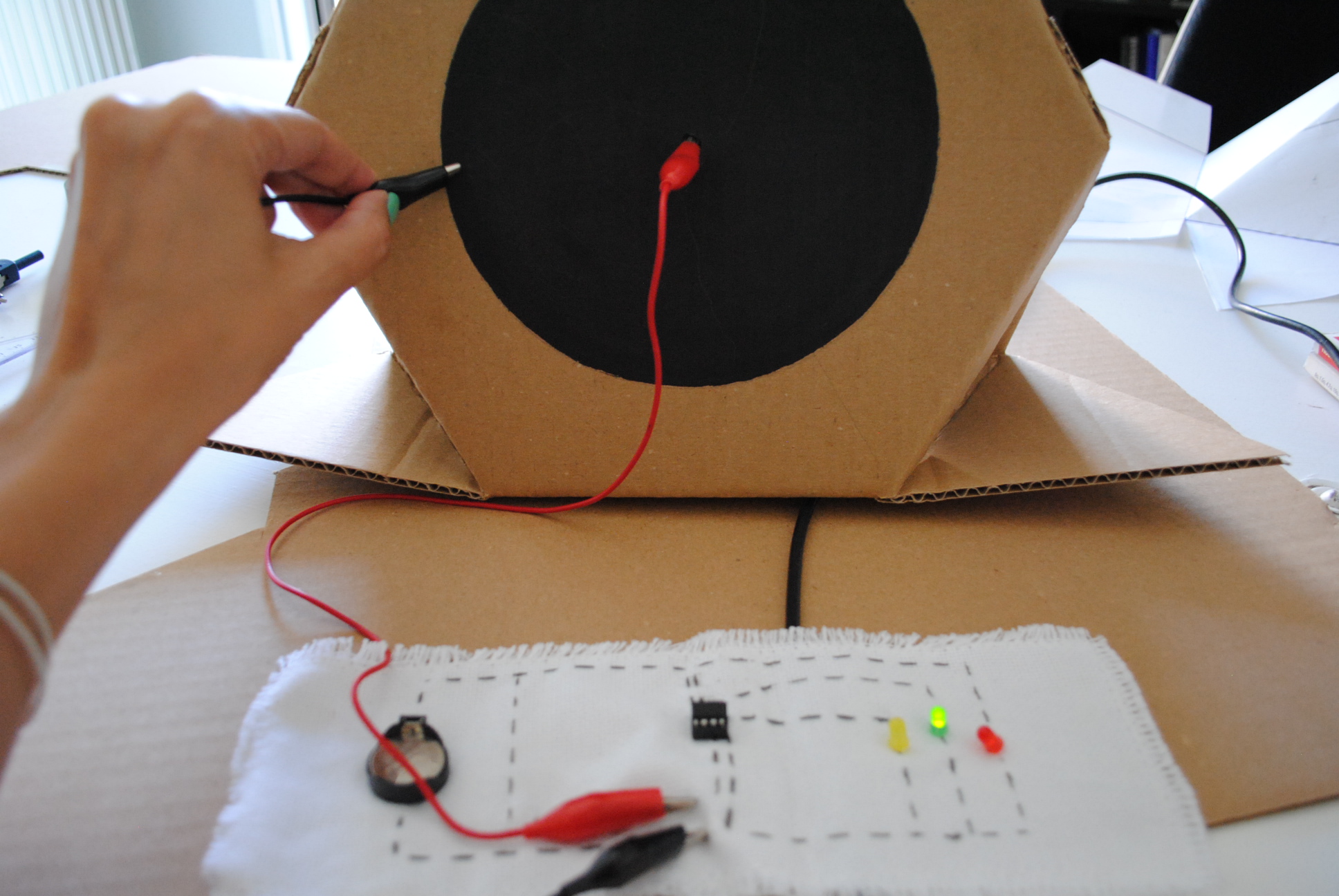 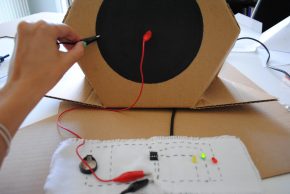 The Elephant & Castle Mini Maker Faire  is fast approaching and we are very excited to be presenting Paper Playscapes, the winning project from our open call commission.

Paper Playscapes is an open-ended installation representing a landscape in movement, one made and played collaboratively by the designers and the visitors. Its vocabulary is based on the truncated tetrahedron. By embedding paper electronics and a simple interaction the designers create a cell that, by the end of the installation, propagates in space to shape, a spontaneous, responsive structure. The installation will consist of six ‘pillars’, fixed modules also serving as play elements of a game designed for the installation. Visitors will be invited to join in assembling and creating the structure and then play! The final outcome is a landscape in the making, a participatory space for dwelling together for a few moments, in order to learn, make and play.

Artemis Papageorgiou and Gabriella Mastrangelo, the two artists behind the project, have been busy working across two countries on this exciting installation as well as preparing the workshop and game!

Artemis, based in Athens, has been responsible for the electronics part, developing a capacitive sensor made with conductive ink and programmed on an ATtiny microprocessor chip. She has also designed the installation game, based on the traditional Music Chairs. In Paper Playscapes, or LumiChairs game, each seat has embedded electronics controlling a set of LED lights on the module surface. A black circle on the surface triggers a distinct game mode, creating a new game sequence in each session. Artemis together with Christos Koutsouradis, the team’s developer, have been working on different prototypes, testing game mechanics, par can colours, tactics and speeds; so they have been having fun!

At the same time, in Italy, Gabriella has been leading the design, prototyping and production of the installation modules and wooden stools.

Paper Playscapes has gone through several stages of prototyping and iterative design to arrive to its final form. The design of the installation and paper modules had to reflect the educational aspect of the work – learning about architectural structure -, the public interaction, making and play, but also its’ ability to host circuitry and the need to be assembled and disassembled easily in various locations.

At the moment, the team is in Athens, where they have been developing the project during a Digital Artists Residency at The Cube, and of course playing and testing the LumiChairs game! The installation parts will soon be shipped to London ready to be assembled for the Maker Faire and soon after that the Crafts Council Make:Shift:Do events.

The artists have been keeping a blog with updates about the project development and production. You can follow their progress here http://paperplayscapes.wordpress.com/ and please come along to make and play Paper Playscapes at the Elephant and Castle Mini Maker Faire on 15th November 2014 at London College of Communication!

Paper Playscapes will be also displayed at the V&A Learning Centre on Saturday 22nd November 2014 as part of Make:Shift:Do.

Making of the modules