In my first blog I looked at what a contemporaneous audience would understand in the medieval poem Pearl. Despite its beauty and intricacy the poem did not enjoy the fame of those written by contemporaries such as Chaucer. The poem was not published or widely available until in 1864 when it was the first work published by the Early English Text Society, a group set up to make medieval literature accessible. This reflected a wider interest in medieval culture that became fashionable in the 19th century. 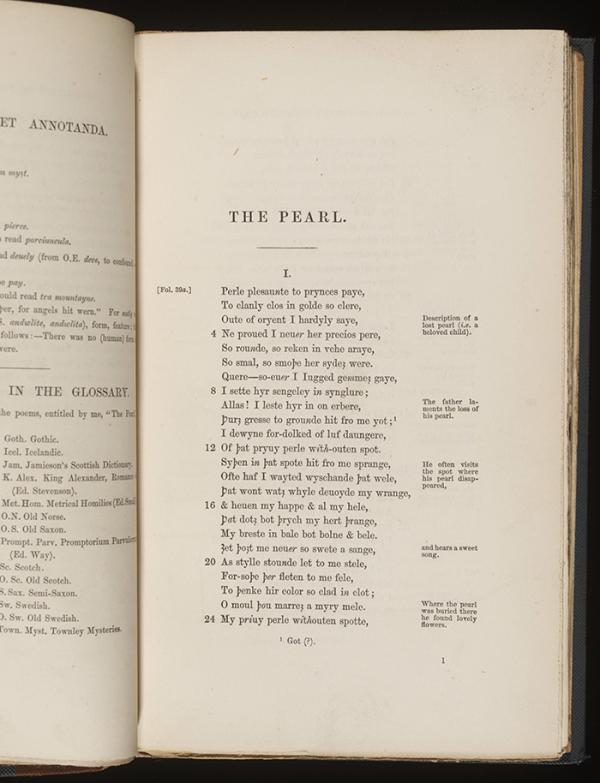 The poem was soon published againin 1891 in a limited edition with a frontispiece illustration by William Holman Hunt, the pre-Raphaelite artist. 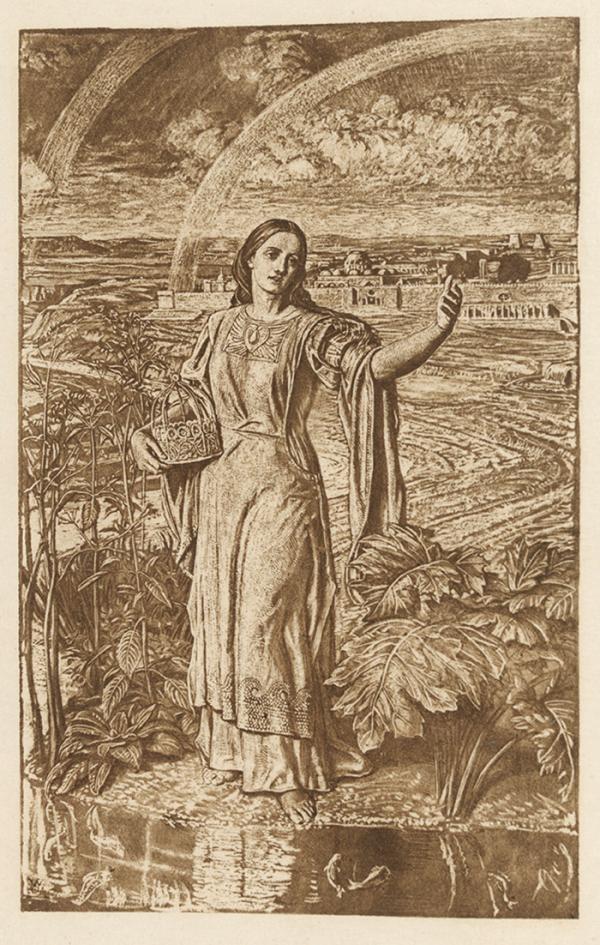 The modern rendering of the poem ‘aims at gaining readers outside the limited circle of specialism’ and meant that it could be read by someone with no knowledge of medieval literature.

The circumstances behind the publishing of the 1891 book and the collaboration with Hunt are not known, but the theme of needing spiritual consolation for the loss of a child would be as familiar to Victorian audiences as it would for those of the 14th century: infant mortality rates were very high, up to 50% in some sections of society. Pearls were still a symbol of tears and loss, often used in mourning jewellery. 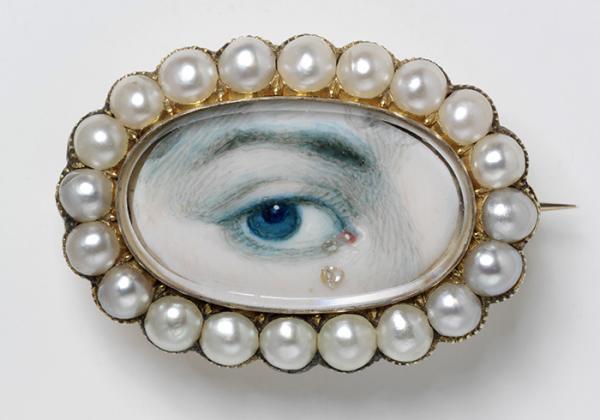 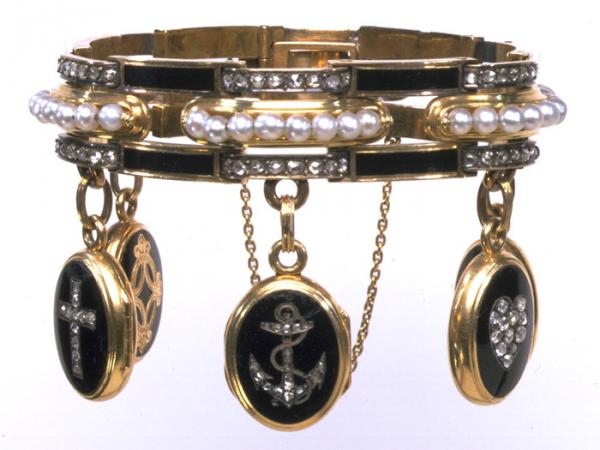 In many ways, Hunt was an obvious choice for illustrator for the poem. As a founder of the pre-Raphaelite brotherhood he was interested in the art and culture of the Middle Ages. In1857 he illustrated Tennyson’s retelling of the medieval Arthurian story The Lady of Shallot. 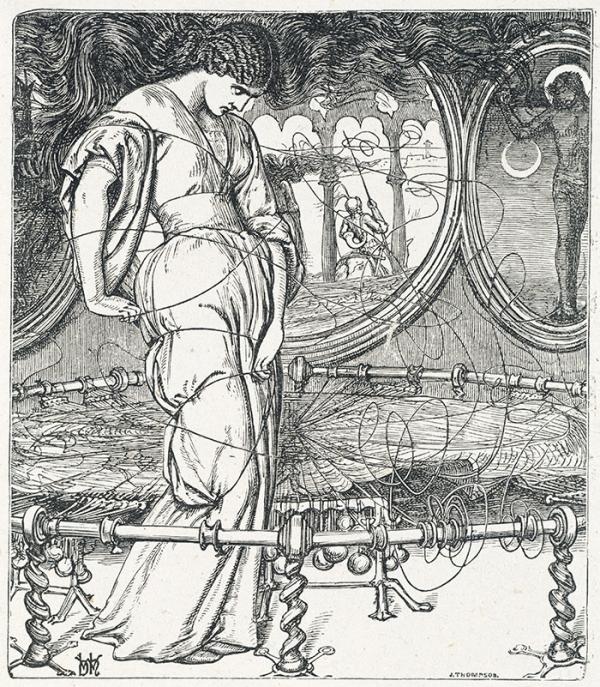 Hunt himself had a visionary experience that brought about his conversion to Christianity in the 1850s. He used his art to teach a wider public about spiritual truths and to celebrate Christianity.  He was well known for his religious works such as The Light of the World, which he said represented his conversion experience. 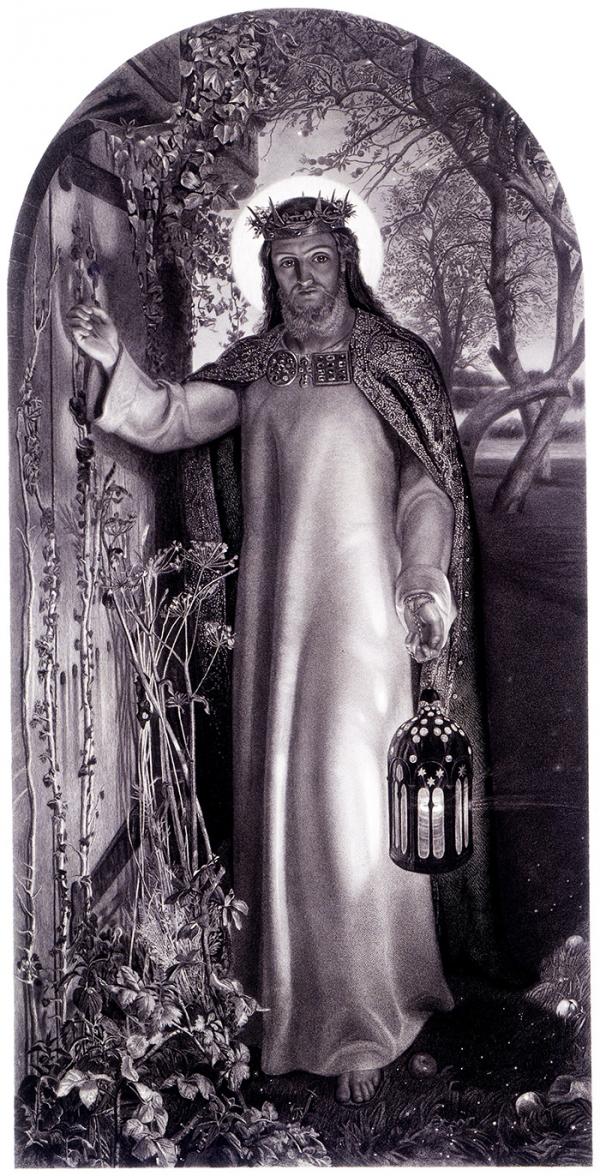 Hunt’s illustration shows the pearl-maiden in a medieval-style dress and follows the poem’s description of the girl’s clothing closely, with double rows of pearls on the hems and the high pinnacled crown. As an artist, Hunt was keen to show realistic representations of people and places as he felt that this aided the viewer’s connection to the work and its message. His attention to detail can also be seen in the celestial city of Jerusalem behind the girl, complete with the Dome of the Rock. Hunt knew the Middle East well and often portrayed it realistically in his paintings.

Hunt was also very interested in symbolism but as a fervent follower of the Church of England and hostile towards Catholicism, he would perhaps not have been so enamoured of the pearl symbolism of the Eucharist and Virgin Mary so dear to the medieval mind (see my first post). His message was more about personal visionary experience and the salvation offered by Christ. His illustration has other symbols: a double rainbow that does not appear in the poem but is another symbol of God’s direct communion with man; fish, the symbol of Christ, play in the river at the girl’s feet.

Hunt’s illustration brings his own pre-Raphaelite artistic approach and personal interest in spiritual visions to the poem. In my next blog we find the pearl poem touching people again, this time during the tumult of the First World War.