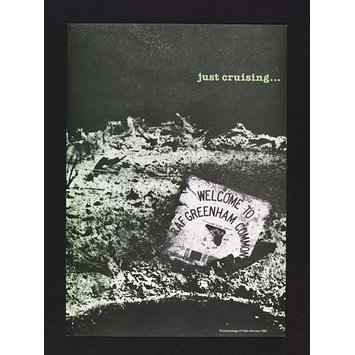 ‘Disobedient Objects’ is a ground-breaking exhibition bringing objects of art and design produced by grassroots social movements and international activists into the V&A.  The show is free and runs until 1st February 2015.  There are some extensive blogs by the curators, exhibitions and technical services staff involved in producing the show, exploring various aspects of the exhibition and the creativity surrounding direct action and protest.  This blog aims to highlight the large amount of objects in the show relating to LGBTQ rights and organisations, some instantly recognisable and legendary, alongside others tantalisingly new!  I will also be linking to objects from the V&A stores which relate to the themes, history, and issues tackled in the show.

One of the first objects you come to when entering the Porter Galleries is a Russian placard from 2012 depicting an anti-Putin slogan over the rainbow flag.  It is the first time the LGBT flag appeared in a demonstration in Russia. See this blog post by curator Catherine Flood explaining its significance, along with images from the protest itself.

As you move through the space, you pass an image of a banner made by Thalia Campbell for the Greenham Common anti-nuclear protests of the early 1980s.  Greenham galvanised the feminist movement and the women-only peace camp has become a by-word for radical protest in the UK.  The press coverage of the event at the time was widely homophobic, writing the protesters off as a lot of ‘leftie loony lesbians’.  The outdoor protest propelled gender analysis and women’s rights into the mainstream media and as the camp grew and grew, a lot of lesbian communities joined the fight and ended up forging links between sexuality and liberation alongside those of gender politics and the patriarchy.  The mass of coverage, whilst undeniably misogynistic and regularly homophobic, successfully put strong women, lesbianism, the politics of nuclear defence, and the harsh realities of the Cold War onto the front page time and again. The museum holds several posters and photographic works documenting Greenham Common and its legacy, including this anti-cruise missile photomontage by Peter Kennard entitled ‘just cruising’- a suitable title for the ‘Out in the Museum’ blog!

Next up is a wall of padded placard shields known as a book bloc.  Originating in Rome in 2010, students cleverly conceived of a shield in the form of a book cover which could be used in self protection against the batons of the police.  Realising the visual potential for police to be photographed beating the covers of landmark literary and philosophical texts as they corralled the student protest over Berlusconi’s proposed education reforms, the first book bloc employed authors such as Petronius, Asimov and Boccaccio, and gay and bisexual writers including Herman Melville and Oscar Wilde.  Below is an example of Wilde’s ‘The Happy Prince and other stories’ on display in ‘Disobedient Objects’, used in a demonstration by the Manchester book bloc on the day of the 2011 Royal Wedding. 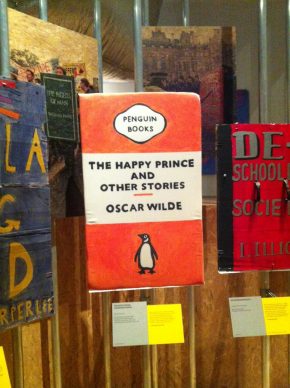 The museum holds a great deal of material relating to Oscar Wilde, including a court sketch of the writer in profile at the Parnell Commission of 1889, and a fantastically camp caricature from an 1884 edition of Vanity Fair.

There are also engravings by Abram Krol for a 1962 publication of ‘The Ballad of Reading Gaol’; new acquisitions in the Theatre & Performance department of costume designs by Cecil Beaton for characters in a ca. 1946 production of Lady Windermere’s Fan; and an extensive collection of Aubrey Beardsley’s exceptional drawings and ephemera surrounding his much mythologised life, including his original pen and ink drawings for the 1894 publication of Wilde’s ‘Salome’.

Moving through ‘Disobedient Objects’, the arresting graphics of the ‘Silence = Death’ project are instantly recognisable.  Formed in 1987 by six gay activists in New York to protest against taboos surrounding the discussion of safer sex, and to challenge the institutionalised homophobia and governmental indifference towards the AIDS epidemic at the time, the creators quickly teamed up with the protest group ACT UP.  On display in the show is a poster, badge, and T-shirt bearing the powerful reclaimed pink triangle logo.  If you delve into the archives, you will find a further 300+ posters and various ephemera from all over the world reflecting AIDS awareness from the early 1980s to the present day.  My personal favourite from these boxes are these ‘awareness cards’ from 1993 depicting prominent people who either contracted the disease, or celebrated persons who spoke out against HIV and AIDS related prejudice.

Next up in the show is a huge, unmissable Jacquard woven banner in silver and black exclaiming ‘Gaybashers, Come and Get It’.  Made by L.J. Roberts, a New York based artist who brings together queer theory, human rights issues, craft techniques, and direct action principles to create engaging and visually stimulating installations and mixed media pieces, often using textiles and wool.  It hangs opposite another large banner by GLITUR (Grand Legion of Incendiary and Tenacious Unicorn Revolutionaries).  This group was created out of the Occupy movement in Seattle in May 2012, so queer and trans activists and their allies could spotlight issues of prejudice and stand in solidarity with all sorts of communities suffering oppression at the hands of corporate capitalist systems.  Their Anything is Possible unicorn impaling an armed, uniformed official really hits home the message!

Don’t miss ‘Disobedient Objects’.  It is a wonderfully inspiring, informative show, and if you want to see any of the archive material shown in this blog post, follow this link  for information on how to make an appointment to visit the Prints & Drawings Study Room